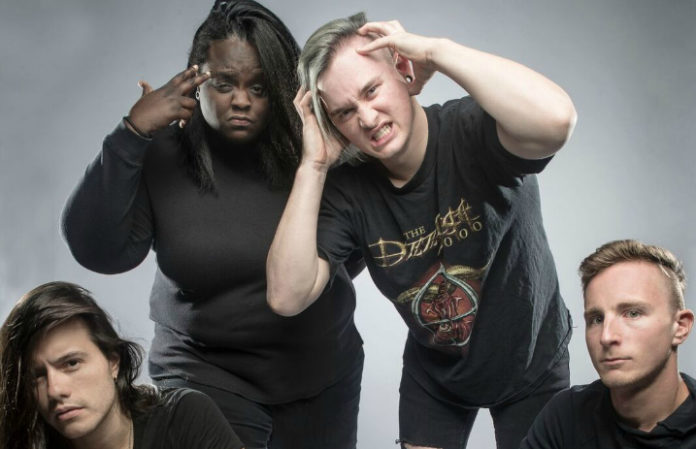 Fast-rising metal group Tetrarch are premiering the music video for their new song “Pull The Trigger,” taken from their forthcoming album, Freak, set to be released this fall following their tour with DevilDriver, 36 Crazyfists, Cane Kill and Uncured.

Citing influences ranging from Slipknot to Linkin Park, their newest track proves that they aren't afraid to pull from a variety of sounds and inspirations—generating all the more excitement for their new record.

We caught up with guitarist Diamond Rowe to talk more about Tetrarch’s new song, bands who are breaking the mold—and what advice she has for other women who want to break into the male-dominated heavy music world.

Watch the band's music video for “Pull The Trigger” below:

And read our Q&A with Rowe here:

When did you realize you wanted to get into the heavy music world? Who were your influences at the time?
I realized early on that I wanted to be a part of the heavy music community. It was not long after this style of music started to interest me that I started playing guitar – I was around 12 years old. Overall, I’ve generally kept the same main musical influences and I just subconsciously add to that list periodically – but my mainstays were and still are guys like Kirk Hammett (Metallica), Alexi Laiho (Children of Bodom), Slash (GnR), Mark Morton (Lamb of God), Dimebag Darrell (Pantera), etc. Just guys that really know how to serve songs well with their styles!

Was it difficult to break into? What kind of obstacles did you run into and how did you overcome them?
I wish I had a more interesting story for how we started this journey but it's actually pretty straight forward. I don’t remember running into many obstacles while breaking into the music world other than a few other local bands here and there. In this business there is always someone out there trying to tear you down or not happy with the goals that you accomplish but I think that just comes with the territory. It’s when you learn to overcome those things that you end up in a good place and I think I/we have it down to a science now.

Who are some current musicians right now smashing stereotypes, breaking the mold?
It’s crazy to me that there still aren’t more people out there out of the norm doing this, but to name a few: My buddy Sarah Longfield is a great guitar player and musician all around that is just smashing every instrument she touches, but most importantly she’s a great guitar player. She's very different stylistically speaking on guitar than I because she’s more into tech metal/djent type guitar work but it’s still great to see. Another one would be Alexis Brown from Straight Line Stitch. I'm not sure what the band is doing currently because I haven’t heard much from them but being a black female screamer in the metal music scene to get noticed isn’t something that you see much and she did a great job at it. It was super cool to watch!

What message do you have for other women of color who want to break into the heavy music world?
My advice would be to just do it. The worst thing that you can do is put limitations on yourself because of who you are because you will only grow to that point that you have mentally boxed yourself into. When I started playing I never really focused much on the fact that I was different until people started to bring it to my attention. I played for the passion and love of this genre of music and when you do that and follow your heart you can’t go wrong, but it’s not going to come overnight. Practice like the boys do, play what the boys do and just as good if not better. If you want people to see you as a contender, don’t rely on who you are because you are different, become good at what you do and then the fact that you are different will just be the cherry on top.

You’re about to start your tour with DevilDriver — how stoked are you about it?
I am actually extremely excited about it. The first show is in a few days and this tour is going to be a blast. I remember buying DevilDriver's “The Last Kind Words” record when I was 17 years old, so it’s pretty funny to be touring with them now. Teenage me would be proud for sure. We have a super cool set ready for this tour too so I'm excited to get out there and play for a bunch of new people that may not have ever seen us before and a few that may have! We’re touring alongside some other great bands on this run, as well.

Talk to us about Tetrarch’s new song and video for “Pull The Trigger.” What does this song mean to you, and why did the band decide to go the route they did with the music video?
There are so many people who struggle with mental illness and have inner battles with self-worth, and “Pull the Trigger” is about just that. The song is basically written from the perspective of someone’s thought process – struggling with one side of their consciousness constantly telling them that they aren’t good enough and they’re worthless, while the other side is saying, yes I am worth something and I do mean something in this life! We wanted this video to just essentially be a plethora of clips of things that can cause people to attract negative feelings in this day and age, whether its drugs, politics, relationships, etc. While I don’t struggle with these things, all of us in this band have people close to us that do, so I think it touches home for us and a lot of other people.

Make sure to catch the band on tour this fall supporting DevilDriver, 36 Crazyfists, Cane Hill and Uncured.

You can preorder Freak on iTunes, Amazon and Google Play.

What are your thoughts on Tetrarch new music video? Let us know in the comments below.