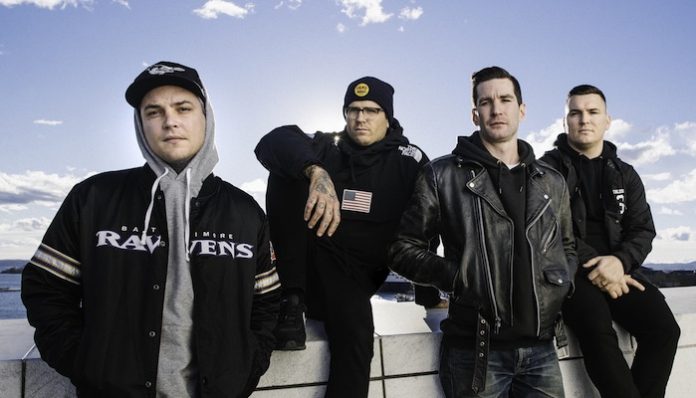 Two years ago, the Amity Affliction made a hard departure for a softer electronic-leaning sound, marking a necessary step in the band’s development, but with their new album, Everyone Loves You… Once You Leave Them, they’re returning to their heavy roots. The experimentation on their last album may have been short lived, but with the new record, they’ve pushed forward the best elements from what they created while discovering they simply were having more fun playing the heavier material live, according to vocalist Joel Birch.

“I’ve been in the band for 16 years, so we have to try something at some point, and it’s a little too risky to try it before you’ve reached a certain level, and we reached a level where we thought we could comfortably try something,” he says. “We tried it, and we’ve learned some valuable lessons through that, so that’s really all you can ask for. I think that all of the good bits show up on the new record, and I think the next one will be another improvement on that.”

While some things change with the Amity Affliction, one constant is the band’s dedication to tackling difficult topics in their lyrics. Birch takes a no-nonsense approach to addressing issues with mental health awareness, whether personal or societal, and the new record puts that on full display.

The musician discusses losing a friend to suicide while the band were on tour through the pummeling chaotic riffs on “Catatonia,” and while the experience left him hurting, he couldn’t shake how others were taking the situation. When talking about the album’s title, Birch is forthright in saying people can take it at face value while addressing the issue of praising a person after they’re gone and it being too late to tell them.

Read more: Ashley Purdy embarks on a mythical quest with “King For A Day” video

“People are so negative online and in the media about bands and write people off,” he explains. “I’m sure there were a lot of people who were writing off Chester Bennington before he killed himself, and the same people were flooding the internet with all of these messages about how important he was. It’s that coupled with one of my friends killing himself, and at his wake there were 200 people, and really it was an excuse for a lot of them to get drunk. It just left a bad taste in my mouth.”

A huge change-up for the band came when, after nine years on Roadrunner Records, they experienced a broken relationship with the label, but they feel extremely optimistic about their newly formed relationship with Pure Noise Records, which came along with the release of “All My Friends Are Dead.”

“We’re so excited to be on the roster with Knocked Loose and Stick To Your Guns,” Birch says. “We toured with Belmont, those young dudes, and they’re really amazing people, so it feels really good to be on a label where it feels a little bit more human. We’re not just a cog in the machine.”

Read more: Here’s everything coming to and leaving Netflix in March

The Amity Affliction bring back some of their electronic-infused energy on “Aloneliness,” which sees Birch addressing his bipolar disorder. He feels grateful to have music as an outlet, allowing him to express his feelings on topics like this because he knows not everyone has the opportunity to be as open as he is.

”When I got diagnosed and went on new medication it really helped me, it definitely helped explain a lot of previous behaviour and how my mind works,” says Birch. “I’ve been writing about my mental health problems for ten years and it’s become my catharsis. That will never change. I write about what I’m feeling at any particular time and that’s all I’m ever going to do. ‘Aloneliness’ is just that line between the two personalities that are co-existing in my head and how I deal with that or feel under the weight of it.”

While mental health awareness is being increasingly addressed and stigmas are lessened, Birch feels the topic still needs to be handled better within the music industry itself. By taking a direct stab at some of the mental health issues people deal with in his lyrics and outside of the music itself, Birch is finding ways to get his own emotional release while trying to create a better environment for everyone at the same time.

“I think bands are put under a fair amount of stress, financially, physically and mentally,” he says. “It’s a pretty arduous job. It can take a toll on you, for sure, and I think by being open about it, we’re creating some solidarity with others who are suffering with the same thing. I hope to open conversations up to people who aren’t suffering from mental health issues so they aren’t so scared to talk to their friend if they are suffering from those things.”

The life of a touring band is difficult no matter the size, but it’s especially draining for those who don’t sell millions of albums. Birch says they’ve done van tours across the U.S. before where they’ve experienced vehicle collisions and had to carry on like nothing happened due to the pressure to make it to the next show and earn an income.

“From the second you start touring, the pressure is on,” he stresses. “You lose friends, and you lose relationships, and you definitely lose money. All of those things are stressful for regular people. A lot of people who are creative already have the predisposition to be pensive in one way or another, and it’s largely disregarded, especially in the online community of people who just listen to bands and don’t participate. A lot of people are dismissive, and then once you’ve gained some bit of success, they think you’re cured of any problems you have.”

In the age of social media, access to entertainers is at an all-time high, which has its pros and cons. On one hand, people are able to interact with their favorite musicians on a closer level, but online trolls spreading hate is something Birch takes issue with. He explains that while those types of people are few and far between, it’s hard to simply ignore the hateful messages some spread without thinking about the person on the other end.

“Oftentimes, these people have had no contact with you other than that,” Birch says. “They’ve got zero insight into our personal lives, and yet they go online and let out aggression. I grew up in a different era where bands were completely out of reach, and the only way of getting in contact was to send snail mail to a label. I would never or seldom get to the band themselves, but we’re in the age of access, and it’s created almost a sense of entitlement. In saying that, it’s all a percentage thing. It’s only a small percentage of people that are doing that. Mostly, people are chill, but the people who are the loudest get heard, and it’s hard to ignore the negatives.”

The Amity Affliction are set to take on a co-headlining tour with Sleeping With Sirens along with support from Stray From The Path and UnityTX. Beginning April 15 in Reno, Nevada, and wrapping up May 23 in Milwaukee, you’ll be able to catch the band playing songs off Everyone Loves You… Once You Leave Them, which can be ordered here. You can see the band’s tour dates below and get tickets here.