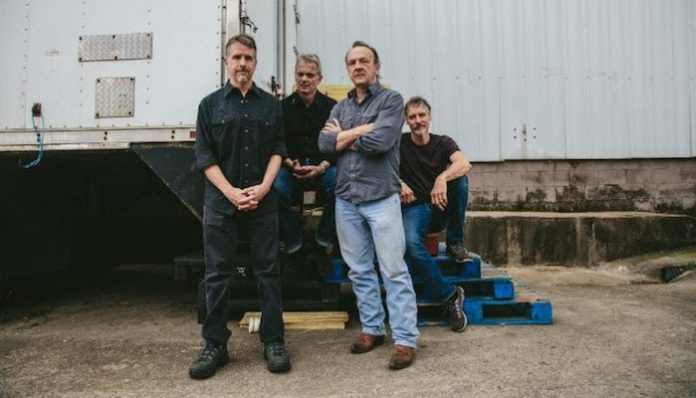 Rock music is a full-contact sport. Sure, you can knock down your feeling of FOMO with the internet and your favorite device. But it’s never loud enough. It’s never in breathtaking detail. It’s never, you know, real. So when a band like searing noise-rockers the Jesus Lizard decide to get together, it feels like a double-shot of cheer at this time of year.

This weekend, the band—frontman David Yow, guitarist Duane Denison, bassist David Wm. Sims and drummer Mac McNeilly—head out on tour to kick 2019 in the nuts for once and for all.

The last time the band did a similar micro-run was in Fall 2018. This goes far to explain their increased longevity. None of the members are dependent on the band to fund their lives or families. Sure, they’re getting paid to tear it up onstage. They think of it more as their yearly poker game, if you will.

“We played nine shows in 2018,” says Denison, right before laughing out loud at the poker-night metaphor. “There’s a party and we’re the band playing. We’re going to drive and fly, come to the party, make a bunch of noise and have people go wild. Absolutely.

“I’m not rich, I’m not poor, I’m not desperate for money,” he elaborates. “We’re also not desperate for attention, either. At some point you reach an age where you like to feel appreciated. I would like to think that at all these shows, there will be a few newbies. These days, I meet more teenagers whose parents turned them onto the band. And I like that they could still see us and compare us to what passes as independent or underground rock now and see the clear difference.”

Denison could never be a WWF wrestler or a hip-hop legend. He’s never stuck in boisterous self-hype mode. It’s probably because of his band’s propensity to leave it all onstage. The quartet’s sleek no-nonsense riffing, charging rhythm section and self-demolition derby frontman is tight, shiny and as unstoppable as a psychotic riding mower.

“We’re not four guys living in a three bedroom apartment in a squalid neighborhood. We all live in different cities. It costs money for us to get together and rehearse for a few days.” He pauses for deadpan effect. “And we can rock out like emperors of the universe once again.”

If you were there at the beginning, you know Denison is only playing with you a little. Over the course of six albums and thousands of road miles logged, the band were pretty invincible in the world’s underground music scenes.

Read more: Which new metal band should you check out in 2020?

There was certainly a lot of punk attitude (read: we play the music we want to, now shut up) delivered with a precision dexterity and a mercurial frontman in Yow. Yow’s full contact demeanor toward the crowds has gotten him both free drinks and expensive ambulance rides to ER rooms.

After their second major label release (1999’s Blue), the band looked at each other, said “mission accomplished” and dissolved. Since 2008, the Jesus Lizard have been reuniting intermittently to play shows and drop audience members’ jaws.

“There are a lot of bands that have gotten back together, played shows and you kind of wish they hadn’t,” Denison reveals. “But there are bands that are similar to us. I think Mudhoney are: They get together, play a handful of big shows and [the members] do their own things and they don’t have to wear it out. The Melvins are still full-timing, six months out of the year. I can’t think of a lot of bands who are doing this as a side hustle. But I like the idea of not living or dying with each song.”

The Jesus Lizard also seem to be the last band standing when it comes to the halcyon days of the ‘90s American noise-rock underground. Entire histories (and coffee table books) have been compiled over “alternative nation” faves. But the Jesus Lizard still represent that indie faction of uncompromising noise rock steeped in octane-booster rhythms and plenty of guitar torture. Once part of a galvanized scene (including their comrades on the mighty Chicago-based Touch And Go Label, as well as the similarly feral roster of Amphetamine Reptile and select outfits on Dischord and Sub Pop), the band are seemingly the last noisy bastards standing.

Denison reveals that the band don’t get much feedback from those quarters or the kingdom of alt-rock. He says usually the accolades will come from the metal community.

“When I listen to alternative stations these days, it’s just bad pop music. I’m not just wondering about what’s the new take on the Jesus Lizard. Where is the new Fugazi? Where is the new Butthole Surfers? Where is the new Black Flag? To me, those were important bands and stylistically, they left a strong imprint. I don’t see that. And I wish I would. Metal is the only place is where you’re going to get aggressive guitar rock; bands like Mastodon and High On Fire have a full-on approach.”

But Denison and the rest of his band aren’t interested in making new statements. Or maybe they are. (“Who knows,” he volleys. We might pull out a new song or two. Or a fanciful cover. You never know.”) The Jesus Lizard are in a rare situation, one where they can play when they want to and listeners across generational strata will be there. Oh, and he gets to hang with his buds.

“Every five or 10 years, something drives its plow over the one before it,” he resigns. “When I play the ’90s rock’ satellite station, I never hear the Butthole Surfers or the Jesus Lizard or Cop Shoot Cop. But when I go to a hard rock show, someone will recognize me and tell me they love my band. And it’s those kind of shows instead of what passes for independent music now. And that is completely fine.”