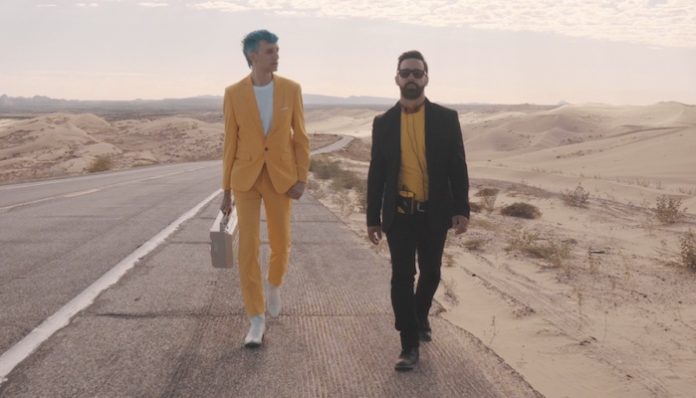 First-person music journalism has always made this writer’s teeth grind. Most of the time the narrators don’t add anything to the story beyond the self-absorbed realm of mere attendance. (Read: “I’m here, you are not.”) But when it was announced that frontman Brett Detar and guitarist Josh Fiedler had reactivated the Juliana Theory with a new song “Can’t Go Home” and its attendant video, it’s hard for this writer not to go into I/me mode.

After nearly three decades in Alternative Press’ hometown of Cleveland, this narrator returned to Greensburg, Pennsylvania, the place where Detar and Fiedler started the Juliana Theory. This coincidence dovetails nicely with the bittersweet sentiment of  “Can’t Go Home,” which follows the duo symbolically traversing their long walk from parts unknown to areas far more engaging and perhaps more remote. Joining the duo on “Can’t Go Home” behind the drums was Ryan Seaman of iDKHOW.

Read more: 10 modern alternative artists who are channeling the sound of the ’80s

Detar willingly listened to Alternative Press contributor Jason Pettigrew unpack all of his psychic baggage through the prism of his new music. He did reveal everything from the motivations behind the song and video to J-Theory’s scene-not-scene identity crisis and all the famous people from Greensburg. All four of them.

Is “Can’t Go Home” about unfinished business or business that ended a long time ago? You can’t return because it’s not the same as you left it? Or you can’t stay because you’ve changed? There seem to be some dual meanings at play.

First of all, what I think is the coolest thing about songs in general, being a songwriter and being a fan of the craft of songwriting, is the fact that if you leave things a little bit open, it lets a person put enough of their own interpretation into something.

“Can’t Go Home” is a song that has already changed meaning to me since I wrote the lyrics. As you age as a songwriter, things will come to mean different things later on in life. For me, that song was a metaphor in general for the innocence of childhood. There was a lot of that to me. How you’re young and you’re naive and you believe certain things. And as you age, you just come to see the world in a different way.

I feel like it’s a bittersweet song to me in the sense that there is hope and acceptance, and there is a future and things are different. You make the most of what you have and what is presented to you at that moment in time. But there’s the sadness that you can’t go back to certain things, that maybe the good things that you wish you could bring back. So to me, it just splits the difference. It seems like a positive, hopeful thing but also being sad at the same time.

One of the things that struck a chord with me was passing the movie theater with “to be continued” on the marquee.

That was very fortuitous. That was a cool shot. Like that’s a really famous older theater in L.A. called the Vista Theatre. There are scenes in True Romance that were filmed there and a bunch of cool older movies. It was on my list of things like, “I definitely want to walk by the Vista.” When we went and saw what the sign had been changed to, I was like, “Oh wow, that’s crazy on multiple levels.”

You’ve got a boombox with you. In a world where you can put your entire record collection on your phone. That’s a symbolic throwback for me. I’m attaching all of my psychic baggage to your track.

Thank you! I was thinking of the title of the collection by the late collage artist, Daniel Eldon, who had that anthology of his artwork titled The Journey Is The Destination. Another aspect was near the end where you see other people from various walks of life, and they’re stopped. Have they stopped by the wayside? Are they just taking a break before they keep walking? There’s a lot of levels going on symbolically.

I’m happy that there’s at least one other person out there in the universe who got what we were trying to say. You pretty much nailed a lot of it. It starts in the suburbs in front of a suburban home, which to me really represented the idea of childhood and things that are familiar. I carried this boombox the entire time, which was my representation of taking something with you from childhood to adulthood that actually really matters to you.

And you know, there are no human beings that show up at any point. No other people show up until I see Josh. So basically walking alone. So you’re on this destination in your life, and you’re going along, trying to figure out where you belong. You’re carrying this thing that matters to you from your childhood. I’m wearing a yellow suit, and then off in the distance, you see this other person coming toward you. They have a yellow Walkman, and they’re wearing a black suit, but they have a yellow shirt on. And you’re like, “Wait a second.” This is a really simple way of saying, “Hey, maybe this is my tribe. Maybe this is somebody I could continue my journey with.” And so from that point on, we keep walking, and then it’s only the two of us. And we come to these weird places, and it just symbolizes change and progress.

And then in the end, when we’re completely super-far away from what we knew and what was familiar. We’re completely out in this literal desert landscape. Out in the distance, we see what I would call a band of outsiders, per se. That really is our tribe. They’ve come before us. They found this place before we found it. We show up, and at the end, we’re following in their footsteps. But you have to get to go through life alone, and you have to go through things on your own. And then if you’re lucky, you’ll find some people along the way you feel are your tribe. That’s what I was trying to say, more or less, in the video.

I was already in Cleveland for years when the Juliana Theory started. There was a community in Greensburg with the hardcore band Zao. I wouldn’t consider the Juliana Theory “scene,” but the band were embraced by that community. Was there an identity crisis at play then? How many times did you play Warped Tour?

We did Warped Tour one time in 2001, and we didn’t even do the whole thing. We just did the West Coast. It was weird. We were total oddballs and outliers. I remember we showed up and got booked on the second stage or whatever. And then it was, “We’re moving you to the mainstage.” I don’t know if it was a critical mass moment for the band. But we started out playing in front of like 800 people. By the last couple of shows [at Warped Tour] were like, “We’re in Northern California. We want to throw you in between Pennywise and Rancid on the mainstage.”

We probably always had an identity crisis in the sense that we always got bored by the idea of having to make the same type of record with the same type of music. Each time we would go to record or whatever. We always just try to change things up. Being embraced by the post-hardcore and emo worlds early on, we felt a kinship to certain bands in that community and certain people. But at the same time, we also felt really pigeonholed early on. That’s why we called our second record Emotion Is Dead. That was literally just a joke. We wanted to call it Emo Is Dead. We thought it would be funnier to be slightly more subtle with it.

I think a lot of what we would do was tongue in cheek, [and it] was lost on people. Because we put on a big rock show in a way that some people in that community didn’t really know how to take. We just always tried to be ourselves, whatever that was, at whatever particular moment in time.

Even right now, the music you’re making is significantly different from the last things you did together. Your music is obviously a more textured melodic pop thing. And it’s up to date with the times. But it’s still very much your character. Plus, the band were never really fond of record labels. But you have aligned yourself with Equal Vision. What made you and Josh want to give it another whirl?

We had this very ill-fated 2017 tour that just completely fell apart. I always felt then that I wanted to try really hard to make things up to anybody that we bummed out. People have been asking for years, “When are you going to make new music?” And I usually just dismiss that. But just last year Josh and I accepted this offer and did this acoustic tour. I didn’t really think it would be that cool. We’ve never done anything like that, and I just didn’t know what to expect. But we ended up having such a good time and got along so well.

At the same time, I had been talking with Dan Sandshaw from Equal Vision. Initially, we were talking to some degree about just trying to reissue some old stuff. But honestly, Dan is probably the coolest label person I’ve ever dealt with in my life. He’s one of the good guys that truly care about trying to do something that can still be artistic and putting the artist first, but at the same time still make smart decisions. There is just something about his passion, excitement and smarts that just felt really refreshing to me.

What should your fans expect from J-Theory 2021?

We were always a bit hard to pin down as far as what we sound like. I wouldn’t necessarily say that one song is an exact representation, but I do think the band were at our best when we were writing more concise pop-rock songs. I feel like what we did best was write shorter, more hooky, concise stuff. We’re not going to try to sound like the 2001 version of our band if people like that version the best. Because that just seems cheap and insulting to the band in the past. Because in the past, we always tried to evolve. So we just felt like that’s the only way to do it.

The fans will be stoked. So how does it feel to be the second most famous person from Greensburg, Pennsylvania?

[Laughs.] I had no idea that I would be considered anything of such. If I’m number two, then the first person cannot actually be famous. Who is number one?

Sheila Kelley. She was in the movie Singles and had roles in L.A. Law, ER, Lost and The Good Doctor.

Yes, he is. But everybody knows TV and movies are far more important than rock ’n’ roll.

[Laughs.] I’ve got to meet that guy. It’s really weird that I haven’t because we have a mutual friend. A buddy of mine plays with him. I need to meet him just because of Greensburg. There are not that many Greensburg people in L.A., and it’s just funny.