It’s fair to say that the Maine prove there’s always room to grow and experiment sonically, all while staying true to your sound and following your gut.

On their eighth studio album, XOXO: From Love & Anxiety In Real Time, the quintet reached new heights after over a decade since their inception, including their first radio hit with lead single “Sticky.”

Lead vocalist John O’Callaghan noted how their seventh album’s writing process differed from XOXO, sharing, “[With] You Are OK, we spent a lot of time just vocalizing what our vision was. It was a long, drawn-out process. And I feel like the idea of the world coming to a halt and us being forced to create this record the way that we did, it minimized a lot of the talk. It was like we knew what we had to do. And it became more like, ‘Let’s create instead of talk about creating.’”

If you know one thing about the Maine, it’s that these creatives will do anything for their fans. Even though they couldn’t tour, they didn’t let this stop them from bringing live music to their dedicated listeners. They created the “XOXO Concert Delivery Service” and performed new tracks for a handful of regionally based followers.

Beyond this service, they performed several livestream concerts over the course of the pandemic, including their “Forever Halloween Ball” and their most recent “Face Towards The Sun” stream. To celebrate the launch of XOXO, they performed from the top of a Los Angeles skyscraper as the sun set with a small group of loyal fans.

“So much of what we do live is heavily influenced by the relationship between [the] band and people in the audience. And I think there’s just no way of recreating that. This was just our way of trying to,” O’Callaghan says of the various livestreams. “And that made for, just in my opinion, our stream to, hopefully, stand out a little bit from the prerecorded, perfect, in-a-box kind of feel.”

This is all in my head… What song from XOXO do you needs to see live!?? pic.twitter.com/xsLinokEId

Luckily, the band are about to embark on a massive tour via Sad Summer Fest with All Time Low, the Story So Far and more artists beginning on Aug. 6. Plus, you can catch them in the U.K. with All Time Low and Meet Me @ The Altar this fall.

Without a doubt, we are all ready to see the Maine live again. AltPress had the chance to catch up with O’Callaghan, Pat Kirch and Jared Monaco to hear about the making of their latest record, how they’re achieving new goals as a band and much more. 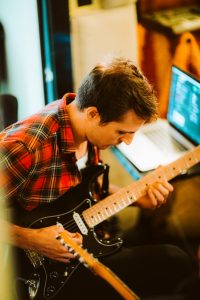 Your songs on this album are incredibly personal. Where were you internally when you started shaping them?

JOHN O’CALLAGHAN: It is just a snapshot of where I was at mentally. With You Are OK, I definitely was thinking less “selfishly.” I was thinking more [about], “How will people receive this?” Hopefully, it would help them. This record, I went a bit more inward and was just speaking from direct experience as opposed to worrying about how it was going to affect other people. And hopefully, once people listen to the record, they can attach their own meanings with the songs. I’m just really excited about how the whole record feels as a record, not as individual songs. I’m really proud of the way that we were able to put a bow on the whole thing and make it feel cohesive.

Over the course of eight records, each one has a unique energy even though you’re tackling similar topics, like anxiety, for example. What motivated the sonic feel for XOXO?

O’CALLAGHAN: We do this push-and-pull thing with our records. If people are getting too comfortable with a sound of ours and we’re getting too comfortable, we tend to push in a completely different direction. And it’s on purpose because I don’t think we ever want to recreate something that we’ve already done. I think we decided to lean more into the pop elements of our band on this record. And I think it was really important for us to embrace it and own it a little bit more and not be so worried about how it was going to be perceived. And because I think at the core of our band, every time that we do something that feels right, people tend to gravitate toward that more. So I think it’s more believable. 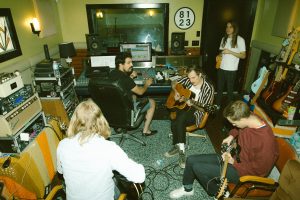 Pat, you are the Maine’s No. 1 fan, of course. You’re always delivering big ideas to the band. What was a goal you had that you saw come to fruition for this album?

PAT KIRCH: The idea for this album was always, “Let’s make our first album in Arizona,” which seems odd that we haven’t ever recorded an album in our hometown. And then primarily produce the album completely on our own. We’ve worked with so many people throughout the years and have gained all of this experience. Finally on this record, it was all happening at the right time where we felt like this [was] our time to use everything that we’ve learned and make the record that we want to make that’s 100% us. And that was an awesome experience just to see what we could do on our own.

I think the ambition was to make a bigger record that could reach more people and could just be a different thing from what we did in the past. And so far, that’s been the case. We have a song right now that’s on the radio every day and all these things that we’ve hoped for for 15 years of being a band. So I couldn’t be happier with the album we made.

“Sticky” is everywhere, and it’s so exciting to see the music video being played in public and heard all over radio stations. What is this new experience like for all of you?

KIRCH: It’s one of those things where you have really no reference for it until you’re hearing it yourself. When you’re not searching for it or you don’t know it’s supposed to play, it’s a pretty cool feeling.

JARED MONACO: [Hearing “Sticky” on] the radio is fun because it’s a new dynamic for us. It’s something that we’ve never really gotten to enjoy as a band. At the end of the day, you don’t really have that much control over what happens with it. But when you hear it on the radio, it’s a really good feeling. So I think for us, after about 15 years of doing this, it’s cool to have that element be part of the mix, especially going into a new record.

O’CALLAGHAN: And to know that new feelings can still be felt this far into being a band is really empowering. New doors can be opened no matter how hard we’ve worked before. There’s always something more to strive for. 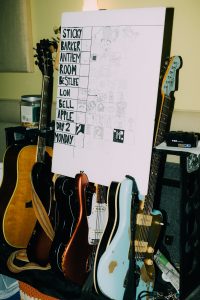 Ahead of the record release, you dropped “Sticky,” “April 7th,” “Lips” and finally “Pretender,” ranging from sexy to sweet to introspective. How did you decide these were the ones to share before the full body of work?

O’CALLAGHAN: A lot of conversation. Hours of talking about things and probably overthinking things. It’s always so difficult because, inevitably, we’ll land on two if we’re lucky. I felt like we were all in agreement that this was the right amount of energy that needed to come out. We didn’t want to release [too many] slow songs. We wanted those to be special moments for people to discover on their own when the record drops. But again, it’s so hard [to choose].

KIRCH: You make an album, and you’re not really thinking about it like that. You’re making the tracklisting and the album and thinking about someone listening to it from start to finish.

MONACO: It was cool just because, with “Pretender” specifically, I think it’s something that all five of us could probably collectively agree that if you’ve been a fan of our band for a while, at least, it’s something that you’d be really excited about. And I think it’s nice to give people that right before they get the whole record. I think it’s a nice small win right at the end going into the record. But like these guys are saying, there’s no real way to do it right. You just have to go with your gut. 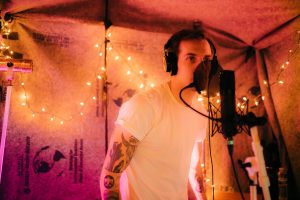 It’s hard to choose, I know, but do you guys have a favorite song off this record?

KIRCH: “Face Towards The Sun.” We take a lot of pride in how albums end, and we also take a lot of pride in not repeating ourselves. So, I think coming after the last record, which had [“Flowers On The Grave“], it was a challenge to figure out how to end the album. And I just think that this one does an awesome job of encapsulating the whole album.

MONACO: I think I would go with “Dirty, Pretty, Beautiful” because I love a hook, [and] I love a groove. And I think that for us, that song at this stage of where we’re at and how the record was taking shape, it finally made sense to really lean into that. That one is just a proud achievement. I think it’s something that for our band, it’s very much us, but it also has a lot of really exciting elements to it that I feel like for a long time, [for] myself at least, I’ve been wanting to hear us try to do in a song. And I feel like that one’s full of them.

O’CALLAGHAN: I think with that song specifically, that is the idea of where we are at as far as the approach on the whole record. And I think Jared’s right: We probably would have been afraid to do something that heavily pop-influenced before. But I would also say at the same time, I’m really excited for people to hear “Anxiety In Real Time” because that’s another avenue that we’ve been reluctant to travel down. I think you’re just on this same road for four-and-a-half minutes. And that’s always been a point of, you know, we get cold feet, and we tend to run from [that]. 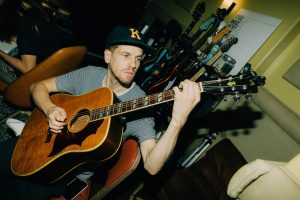 You bring up a great point, Pat, about the Maine’s history with album closers. You pour your whole soul into every single album closer, whether it’s “Flowers On The Grave” or “Forever Halloween” and beyond. What made “Face Towards The Sun” the perfect closer?

KIRCH: There is just a feeling that you get when you hear it, and it’s like, “Oh, this would be weird being the fifth song. It has to be where it is. It has to end.” You almost couldn’t hear anything that would happen once “Face Towards The Sun” was done.

MONACO: I think knowing that it was going to go last filled in the roadmap a little bit better because I think pretty early on, we were pretty sure “Sticky” was going to go first. Knowing the bookends of the record makes it, not easier, but a little bit more clear to see what you need to do to get from A to B.