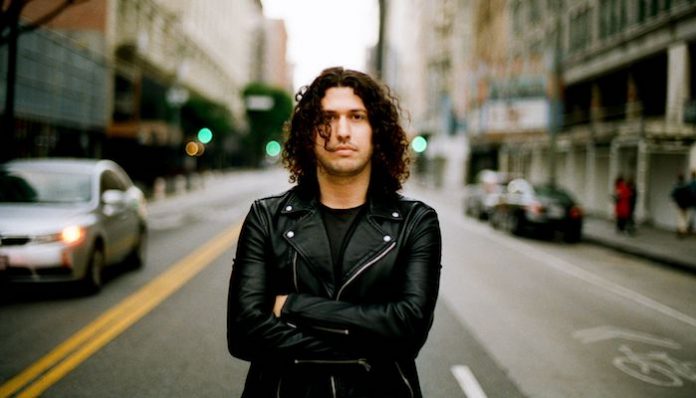 The New Regime, the brainchild of multi-instrumentalist Ilan Rubin, just wrapped up a supporting slot on the first Angels & Airwaves tour in seven years. Rubin took on dual roles as AVA’s drummer and the New Regime frontman, kicking off the night with the latter by playing through his latest Heart EP and a plethora of other favorites.

Now, the musician is teaming up with AltPress to share the desolate Los Angeles-set “A Way To Feel Again” video.

In addition to AVA, Rubin has contributed to work by Paramore (self-titled), Nine Inch Nails (Hesitation Marks) and Beck (Colors), but the New Regime is all him. He takes on vocals and every instrument on the recordings and travels with a touring band for shows. The frontman has released several albums under the project thus far, debuting with Coup in 2008. Speak Through The White Noise followed in 2011 and then Exhibit A and Exhibit B in 2013 and 2015, respectively.

“A Way To Feel Again” is taken from the New Regime’s latest Heart EP, which was released just over a month ago. The four-song collection marks the first of a four-part series titled Heart, Mind, Body, & Soul.

Rubin reveals that like its visuals, the track is a commentary on society’s obsession with technology.

“[The song] deals with the disconnect we experience as people consumed by technology,” he says. “Often, we chose to convey deeper emotions through the surface-level, two-dimensional communication of texting and emailing, which adds to our detachment from one another.

“This sentiment came to me from the mechanical beat and eerie synth sounds that laid the foundation for the vibe of this song. I wanted to counter these robotic elements by injecting some soul through the bassline. Stacked vocal harmonies and various distorted sounds convey the desperate need for a change.”

Read more: Green Day are ready to knock out teeth with the NHL in “Fire, Ready, Aim”

Rubin recruited John David Moffat, who has worked on films such as the Ryan Gosling-led Drive, to direct. Immediately inspired by the ghostly sonics Rubin wanted to capture, Moffat worked to relate that visually.

“The moment I heard the opening sound from ‘A Way To Feel Again,’ I knew the visuals needed to be surreal,” Moffat says. “The sound had an eerie quality to it. I imagined the opening image right away, flying above a skyline all the way down to the surface.

“Once I got deeper into the song, I discovered that the lyrics were about this feeling of isolation in the modern world as technology takes hold of all of us. To express this, I had a camera flying from above, stalking him on his journey home and him on the ground trying to evade, treading through an area of earth full of infrastructure but devoid of humanity.”

Watch the new video for “A Way To Feel Again” below, and check out all of the Heart EP here.