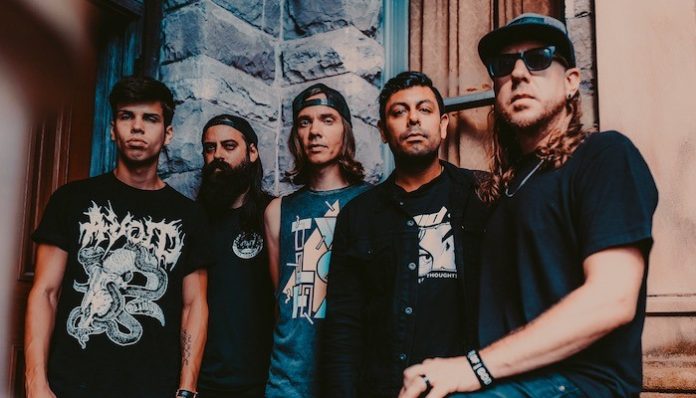 The Red Jumpsuit Apparatus are kicking off 2020 with their first original new music since 2018. The band are teaming up exclusively with AltPress to transfer you to “A Long Time Ago In A Galaxy Called LA.”

The single marks their first new release since 2018’s The Awakening. However, the band weren’t totally quiet in 2019, having shared a radio mix of one of the album’s tracks, “Shooting Star.” They also joined Hopeless Records’ Songs That Saved My Life Vol. 2 to share their cover of Thrice’s “Trust.”

Read more: My Chemical Romance UK ticket resales being invalidated by some sites

Now, the Red Jumpsuit Apparatus frontman Ronnie Winter is opening up about how he met his wife in a new song “A Long Time Ago In A Galaxy Called LA.”

“This song was just really fun from the beginning to the end,” Winter begins. “It’s the story of how I met my future wife. As I was producing the lead vocal, the engineer tracking me stopped and said, ‘This is crazy. I was here this night!’ And he was there, so that was proof to me I really captured the essence of the occasion lyrically.”

Delivering everything we know and love from the Red Jumpsuit Apparatus since their 2006 debut Don’t You Fake It, the new track gives a nod to those emo roots.

Read more: The Red Jumpsuit Apparatus on troubling, joyful significance of “Face Down”

“It’s a melodic roller coaster of nervous excitement, like when you first meet someone special,” Winters continues. “This is a fun, unashamed love song straight from the emo playbook. Don’t quit before the end because this song rides hard until the wheels fall off!”

“A Long Time Ago In A Galaxy Called LA” officially drops this Friday, Jan. 31, marking the first song off their forthcoming The Emergency EP. You can presave the single on Spotify, Apple Music and iTunes after you give it a spin below.

The Red Jumpsuit apparatus will embark on The Emergency EP tour with the Wildfires Projekt as support at the end of next month through early April. Eyes Set To Kill and former Saosin frontman Cove Reber’s Dead American will also join the bands on select dates.

Shortly after, TRJA join Boys Like Girls in Australia to celebrate the latter’s 2006 self-titled debut. Tickets for all shows are on sale now here, with a full list of upcoming dates below.