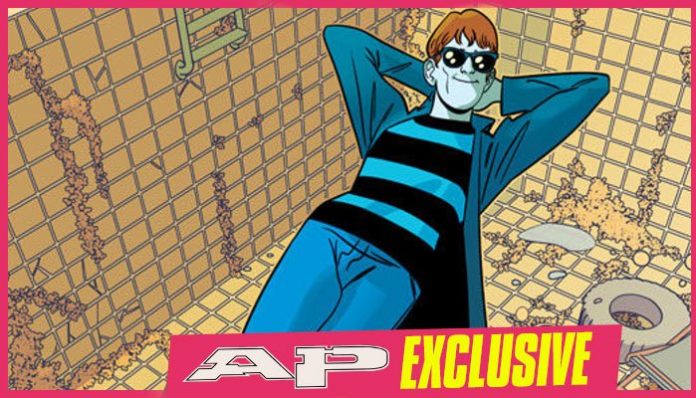 Things are getting even weirder for Klaus Hargreeves in issue two of You Look Like Death: Tales From The Umbrella Academy. Gerard Way and Shaun Simon are back at it again—sending Number Four on an odyssey through Hollywood. Klaus channels the spirits of the tap-dancing dead with a vampire-chimp drug lord hot on his trail. Things get dark and scary for our favorite angsty medium in brand-new ways. You won’t have to wait for issue two to hit comic shops Oct. 21 because Alternative Press has your first look. And our pals at Dark Horse Comics even sent over five pages from the issue that you can only see here.

When we last saw Klaus in issue one, his recklessness got him excommunicated from The Umbrella Academy. On his own, and without an allowance, for the first time, he heads to The City. Using his powers to help him score an intense drug bender, Klaus ends up on the shit list of The Shivers. The Shivers is a suave chimpanzee drug lord who happens to be a vampire. Livid, he plans to take a redeye flight to find Klaus and extract revenge.

Read more: Mikey Way knew he had to leave his comfort zone to help others

Meanwhile, Klaus makes his way to Hollywood. He’s solicited by aging actress Vivian Clarke to escort her to an extravagant social gathering. Klaus becomes the life of the party as he conjures, and dances with, the spirits of dead Hollywood. Throughout the issue, Clarke grapples with the looming dread of being too old for modern Hollywood. But as all eyes fix on Klaus, Clarke sees an opportunity to regain relevance in the ecto-green glow of long-deceased celebrities.

“This is where we find out what Klaus is doing to get by, and high, in Hollywood,” Simon exclusively tells Alternative Press. “We meet friends, foes and even some gods. Along with the Gabriel [Bá] and I.N.J. [Culbard] covers, we have an amazing variant cover by Matthew Allison.”

Issue two picks up with Klaus and Clarke finishing up a spectacular dance number atop a dinner table at the party. As spectators clamor to get closer to Klaus, Clarke whisks him away to her mansion. Klaus wakes up from a haunting dream—flashing back to his childhood.

The young Number Four is forced to take his powers to their limit by his father, Sir Reginald Hargreeves. Sir Hargreeves forces Klaus to summon the spirits of every corpse in a cemetery. Klaus hides behind tombstones and begs his father to let him go to bed, but his father is relentless. As if midnight graveyard summoning marathons aren’t disturbing enough, Sir Hargreeves pushes Klaus to his absolute breaking point. Presenting him with a box containing Klaus’ road-killed cat, Sir Hargreeves insists that Klaus bring back the spirit of his dead pet. And if he doesn’t, his father will not allow him to go home to bed. As tears stream down his domino mask, Klaus refuses and wishes for his father to be dead instead.

This is one of the most emotionally gutting moments in any Umbrella Academy story. It’s a quick exchange but shows how truly traumatic the Hargreeves upbringing was. One of the strongest elements of You Look Like Death thus far is its scathing sense of humanity. For a comic that features a vampire chimp trying on couture suits and a degenerate psychic as the main character, this story is grounded in realism. The relationship between Klaus and his father is hinted at in short and troubling bursts. The abuse that Klaus endured as a kid may be centered around superpowers, but it’s in no way exclusive to superheroes. It’s the kind of domestic trauma that sadly exists in the real world and continues to plague Klaus in a profoundly realistic way.

Read more: Here’s what to expect in Gerard Way’s Klaus-centric ‘You Look Like Death’

The relationship between Klaus and Clarke is proving to be one of the most captivating arcs of the miniseries. It plays into both teenage Klaus’ pursuit for a parental figure and his urge to score drugs. Although he uses drugs as an escape from his pain, they also make the flashbacks of his emotional damage more vivid. The series also layers on another texture of realism as it shows Clarke struggling with her addiction to fame and glamour. She desperately wants to return to her glory days of being a celebrity, but her age continues to push her further from the spotlight.

The series continues to explore what each of them will do in pursuit of their high. The dichotomy between the teenage medium who can weave in and out of the afterlife and the actress in the twilight of her life remains alluring. And it’s a rich analysis of youth and mortality seldom seen so stylishly laid out in a superhero comic.

You Look Like Death issue two will be released Oct. 21. It is currently available for preorder on the Dark Horse webstore. Along with Bá’s cover, two variant covers are also available—one illustrated by Culbard and the other by Allison.

Issue two finds Klaus chatting up strange writers over coffee at bars. We see The Shivers make luxurious strides in his pursuit of vengeance. We see Klaus use his powers in another previously unseen way. And plunging blood sugar levels lead to a dramatic and terrifying cliffhanger in this installment of You Look Like Death. This miniseries is a can’t-miss for Umbrella Academy die-hards and Gerard Way completists. It also provides a perfect gateway into the world of the Hargreeves family for those somehow still uninitiated.

Check out a preview of five pages from You Look Like Death issue two below. 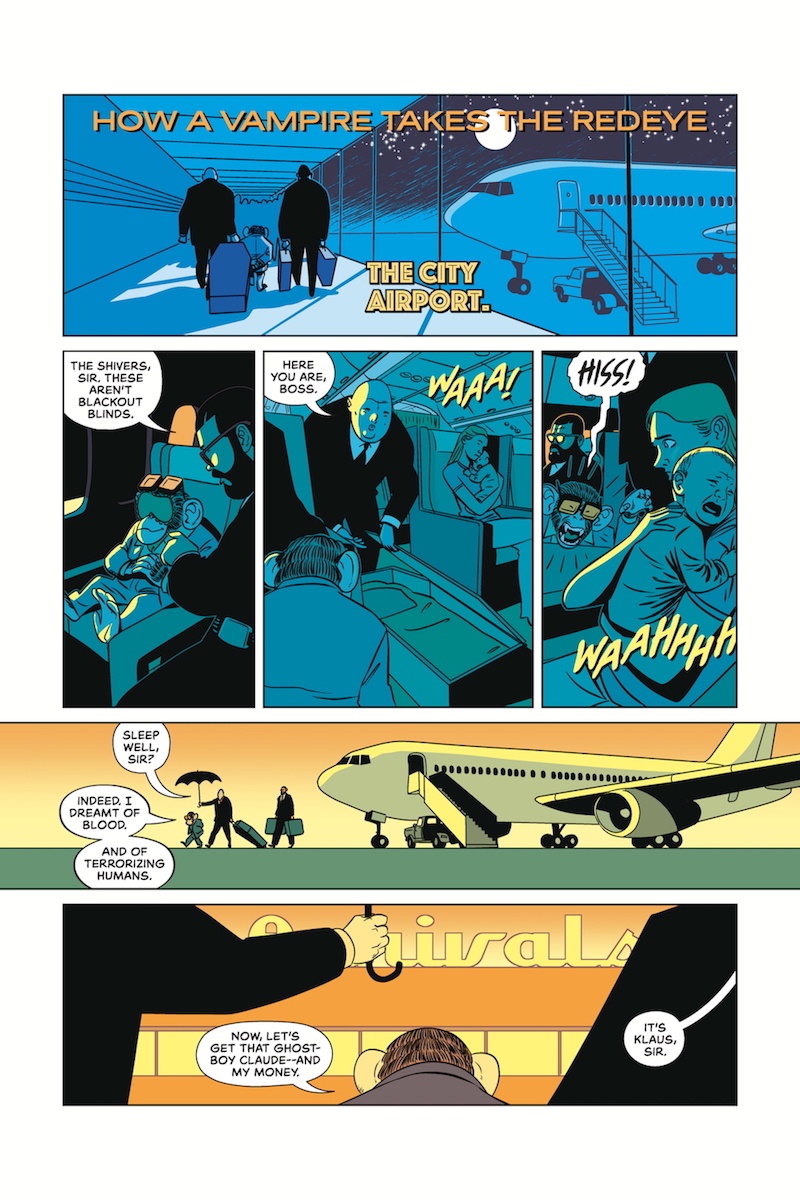 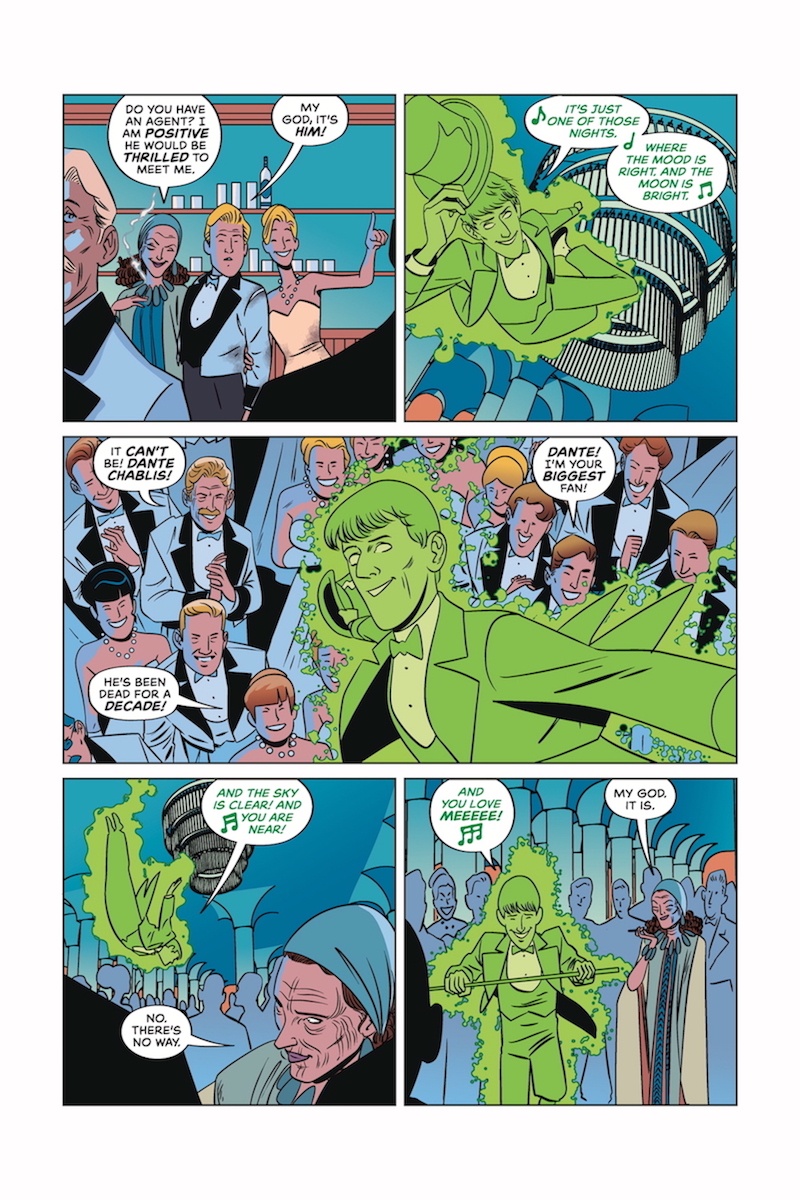 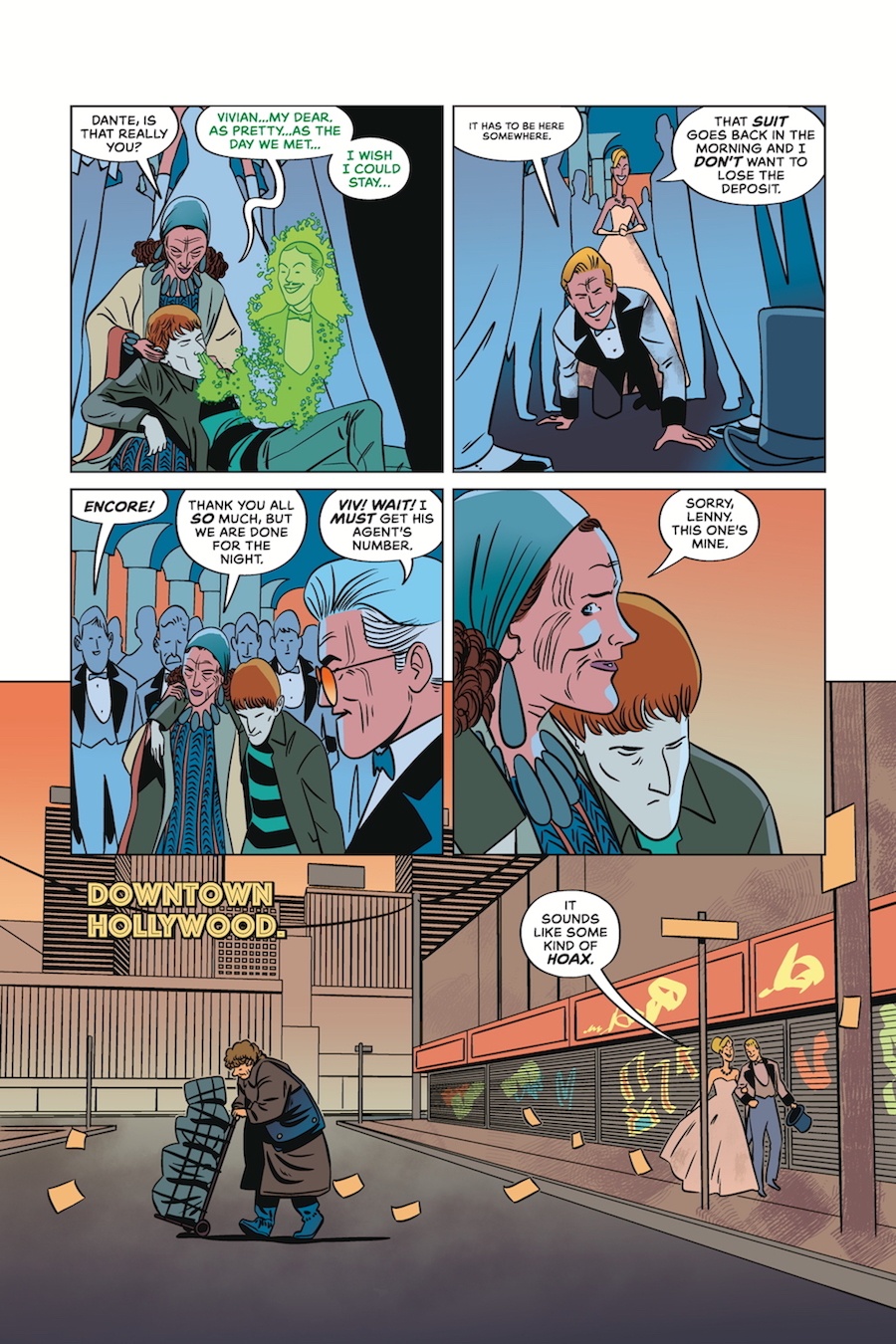 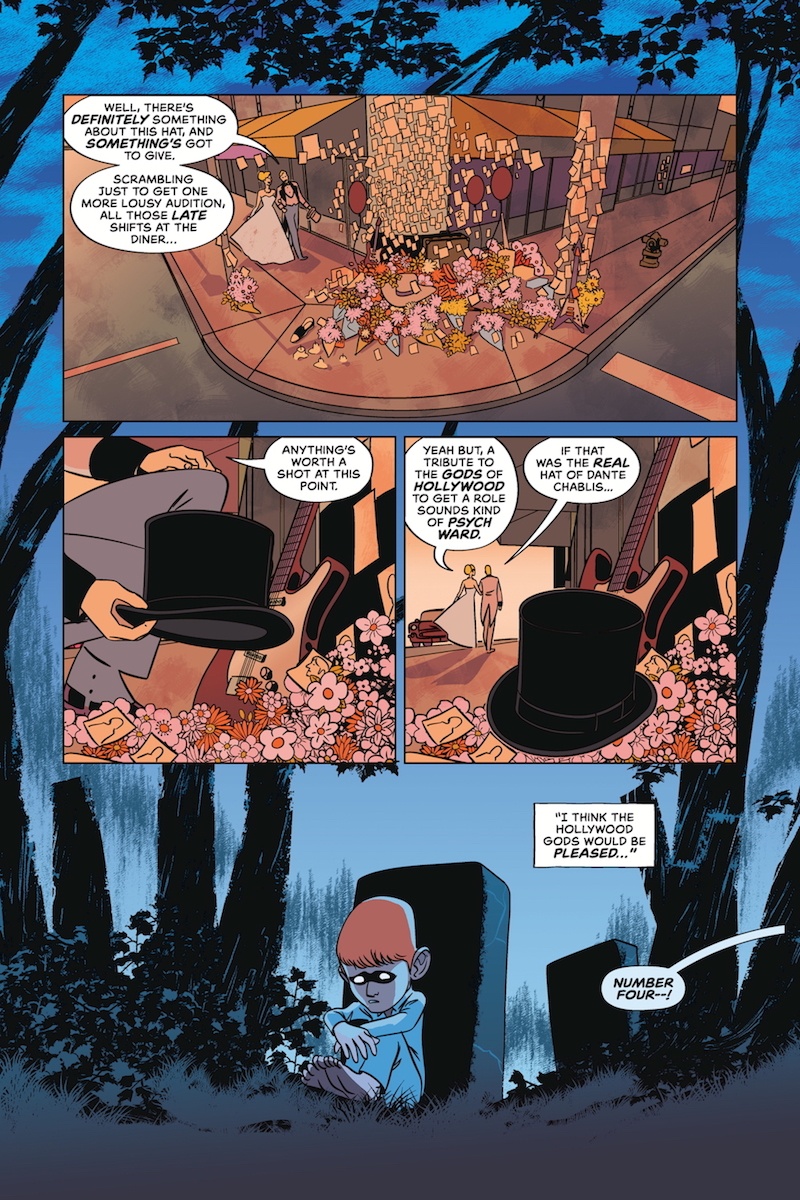 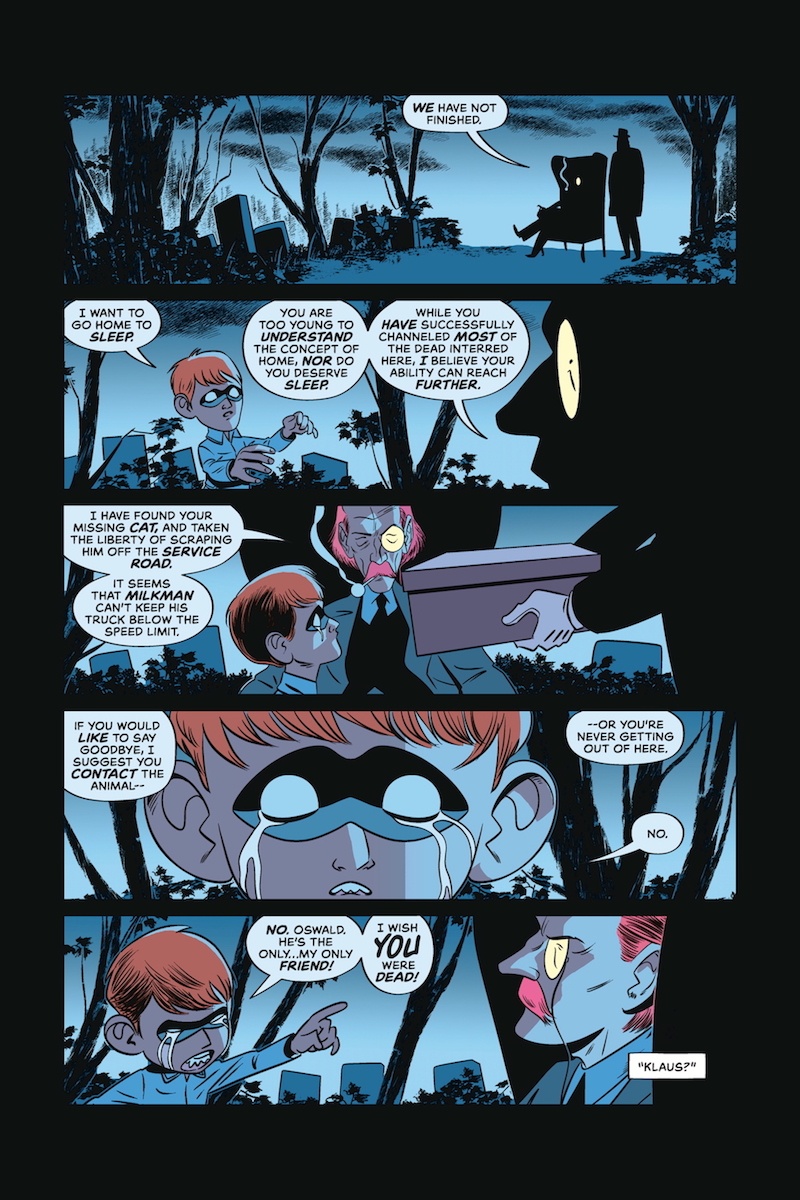