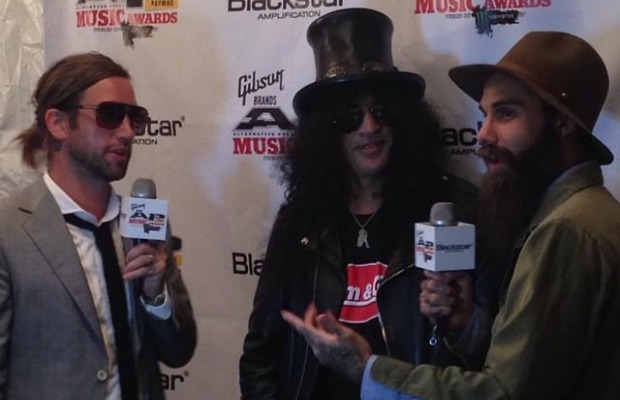 While the awards were being presented and the songs were being sung, the AP staff was racing around Voinovich Park making sure things rolled along smoothly and no one fell off the stage or into the lake. When you’re backstage surrounded by that much star power, you’re bound to see a few interesting things. Here are some behind-the-scenes moments the AP editors spotted firsthand.

As a result of living in a society which places women’s bodies under a microscope where strangers feel entitled to comment on them openly (and often painfully critical), everyone has insecurities—even some of the most stunning people.  Case in point: Our gorgeous red carpet and Blackstar lounge host Juliet Simms. As I was helping out in the tent, she frowned at herself on the screen, which was showing red carpet interviews, nitpicking her appearance in her amazing custom-made jumpsuit she had worn. Anyone who has seen Simms would do the same thing I did, reassure her she was beautiful, but as we all know, that doesn’t help. “I know how that goes, though,” I told her, not to dismiss her feelings, then in a grrrl power moment, we high-fived on the fact that, fuck it, we’re all “voluptuous women” who shouldn’t be tricked into feeling ashamed of our bodies for their various natural shapes. Critics who have no right to open their mouths about another person’s appearance be damned. —Cassie Whitt

The Misfits are horror legends who are constantly in character, so I didn’t know what to expect on rehearsal day when spike-clad Jerry Only turned with a beaming smile to shake my hand on the Sunday before the show. Over the course of the next couple days, Only was all over the place, giving out Misfits goods, remembering the names of everyone he met, taking selfies and being a generally fucking swell guy. From his perspective on the legacy of the Misfits (that the torch should be passed to a younger generation to keep it alive) to his enthusiasm to meet and give everyone a smile and a wave, Only totally embodied the friendly community spirit we all felt at the APMAs. A little behind-the-scenes fact about the Misfits’ performance you saw: “We Are 138” was not originally part of the set, but the band ran through it with Andy Biersack at rehearsal. The Misfits also played “Saturday Night” at rehearsal as a special treat just for Biersack’s parents. Sweet dudes.  —Cassie Whitt

“Sir, Mr. Coolio needs you to get him two beers immediately, please.”

That was said to me backstage by a PA just minutes before Coolio was set to take the stage as a surprise guest with Falling In Reverse for their cover of the classic “Gangsta's Paradise.” Not a problem, right? Wrong: The APMAs backstage area was dry, meaning if I wanted booze, I had to get it from out in the crowd like anyone else. I ran as fast as I could, dodging rock stars of all shapes and sizes along the way, before coming up to the back of a beer tent, and frantically yelling, “I NEED TWO BEERS FOR COOLIO, RIGHT NOW.” Amazingly, the woman working the tent didn't even flinch, immediately procuring two Coors Lights from the ice box and handing them to me without so much as even a request for money. I got the beers back to Coolio maybe two minutes before he went onstage and felt like I had finally accomplished something of note in my life. (Dude even thanked me later for the hustle, too.) I used this same panicked technique later in the night to secure two more beers for “Joan Jett”—at least that's what I told the beer vendor. (They were actually for Jason Aalon Butler of letlive. and Every Time I Die's Keith Buckley, who were hosting our backstage lounge.) –Scott Heisel

The worst-timed crowdsurf call ever

A Day To Remember easily got one of the biggest crowd pops of the night, opening with “City Of Ocala” and bringing out Ben Barlow from Neck Deep to help sing the song's closing part. Then, ADTR frontman Jeremy McKinnon said for their next song, “Right Back At It Again,” he wanted to see crowdsurfers now. Not a problem, right? I mean, we had security and barricades and everything—only it wasn't the 300ish people in the front VIP section who were crowdsurfing, but the roughly 6,000 people behind them, and the only thing separating the two crowds was a not-nearly-reinforced-enough bike rack barricade. So as the crowd surged and crowdsurfers started toppling over onto the ground with no one there to catch them, I jumped the side barricade—still in my formalwear, mind you—and started catching crowdsurfers and holding up the barricade to avoid potential injures (and, uh, lawsuits) alongside some truly surprised security guards. Luckily, that was the craziest the pit got all night long, because I'm not sure me and my white jacket could've taken much more punishment. –Scott Heisel

Sleeping With Sirens came in the Sunday afternoon prior to the APMAs to check out the Voinovich Park site  and soundcheck their performance. When frontman Kellin Quinn came out he started freestyling some ball-busting wisecracks about his managers. “Hey [NAME REDACTED]! ‘Uh, can't talk, I'm on a call.’ Yo, [NAME REDACTED] ‘Uh, I'm having a beer, let me get back to you,’” before running through a charged version of “If You Can't Hang.” SWS' only live appearance so far this year was at the APMAs, and we can't wait to hear how they'll follow up Feel. –Jason Pettigrew

The quashing of the beefs
When you're running a magazine for 29 years, you're inevitably going to step on toes, rub people the wrong way or get all up in a grill or two. Sometimes people are going to do it to you, as well. The APMAs provided fans and performers with an evening of celebration, but it also provided a backdrop for a couple AP editors to mend fences with people whose memories we were keeping in our psychic Beefkeeper 5000 cold-storage freezer. No need to name names (some of these conflicts were made in public platforms), so we're just glad to have mended fences, hugged things out and bask in all those moments. Moral: Life is too fucking short, so why hate when you can congratulate? –Jason Pettigrew

Is that who I think it is?

I spent the first hour of the APMAs backstage in the Blackstar lounge while our videographer filmed interviews with anyone coming offstage. Although I didn’t get to see Coolio’s surprise appearance during Falling In Reverse’s performance in person, I caught it—and the rest of the first hour—on a backstage TV. When MGK came in to be interviewed, Asking Alexandria had just taken the stage to perform. Suddenly, something on the TV catches MGK’s eye, and he looked up. “Is that—,” he started to say. “Is that—,” he said once more. I figured he was searching for the name of the person who had just joined the band onstage, so I helped him out. “It’s Jonathan Davis of Korn,” I explained. Suddenly his words came back to him, and he looked straight at me. “I know who it is!” he said excitedly. “It wasn’t a ‘Who is that?’ but a ‘Is that really who I think it is?’” I think he said something else along the lines of “I can’t believe Korn are here,” before walking to the TV and planting his tall frame firmly in front of the screen. He kept his eyes on Davis until we pulled him away for a quick interview. –Brittany Moseley

I’m fairly certain nothing bad has ever been written about Saves The Day frontman Chris Conley. I’ve heard several people (including managing editor Scott Heisel) tell stories about Conley’s grade A personality, and at the APMAs I saw it firsthand. Having just introduced Fall Out Boy, Conley and the rest of Saves The Day, were watching from the VIP area beside the stage as the band closed the show with “The Phoenix.” As FOB played their final notes, Conley began clapping vigorously and let out a few cheers, usually reserved for sporting events. This wasn’t an artist forcing out some polite clapping in case the TV cameras happened to catch him. He was genuinely happy to be watching Fall Out Boy. Here’s a guy whose music career spans more than two decades, and he still gets excited about music and watching other bands perform. After a 14-hour day of pure excitement and chaos, it was a nice moment to end the night with and put things into perspective. Later that night, I tweeted about Conley’s nice-guy attitude and he responded with a simple, “Holla.” I think that means we’re now BFFs. –Brittany Moseley

After receiving their awards, many musicians went directly backstage to a lounge for interviews. While I was in the lounge helping out with those interviews, we got word: “Slash is on his way.” Once he came in, the dude was sitting two feet away from me. It wasn’t that I was starstuck; something just looked out of place—in a good way! Seeing an iconic musician like Slash (as well as Billy Corgan and Joan Jett) associated with and taking part in our music scene lent it a newfound credibility. He chatted it up with Keith Buckley and Jason Aalon Butler and gave a pretty humble interview. When we first learned about it, I certainly thought it was cool that older, more iconic musicians would be attending the awards show. But something about seeing them almost as peers among the big musicians from the AP scene really made it hit home. –Matt Crane

For those thinking about coming to the APMAs next year, this should be a big motivator: All of your favorite musicians are hanging out in the same part of the city. In this case, most of the musicians were staying at the same hotel. So not only would you have a good chance of meeting them at the awards show, but they were everywhere around town, too. I couldn’t walk in any direction without bumping into some of my favorite musicians or being stopped to chat with them. In one rather ridiculous case, coming out of the elevator into the hotel lobby, I passed the members of Sleeping With Sirens, casually walked by Mark Hoppus before rounding the corner and bumping into Motionless In White. You can’t make that shit up. —Matt Crane