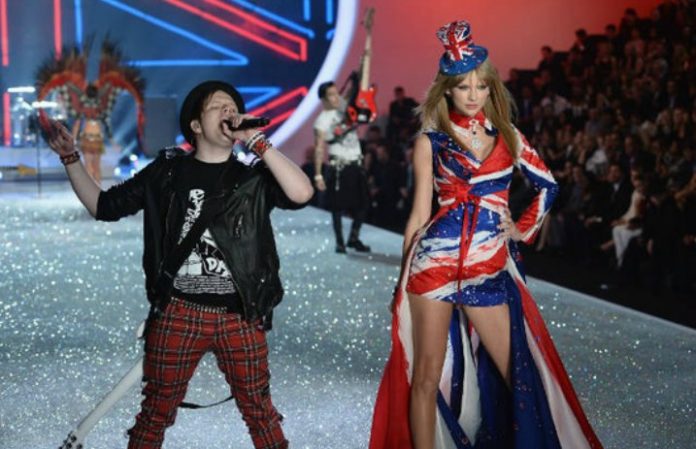 One of the best parts about music is that it produces this ever-evolving community that has a knack for bringing people together. Many artists have embraced the chance to share the stage with an unexpected counterpart. Check out some of the best genre crossover performances in recent years below.

The Victoria’s Secret Fashion Show is known for its showy display of bra and panty sets complete with elaborate wings all worn by an array of “Angels.” Between these runway struts are elaborate live performances and none were as awesome as the modern day princess of pop, Taylor Swift, joining Fall Out Boy in 2013’s broadcast.

Despite the fact MTV doesn’t play as many music videos as they used to (video-centric Clubland airs at 3 a.m. catering to early rising ravers and insomniacs alike), they still host their annual MTV Video Music Awards. This year’s awards consisted of an electric performance by genre-crossing mainstays twenty one pilots meshing their “heavydirtysoul” with rapper A$AP Rocky and his tracks “M$” and “L$D.”
“I Want You So Hard (Boys Bad News)” – Eagles Of Death Metal featuring Kesha

Kesha may be flying under the radar thanks to a bout of legal issues with producer Lukasz “Dr. Luke” Gottwald that have put her own career at a standstill, but that doesn’t mean the pop songstress isn’t still involved in the industry. The singer attended this year’s Riot Fest in Chicago and jumped on stage to offer backing vocals for Eagles Of Death Metal. While no videos of that performance seem to be online, it appears Kesha also supported the band the following evening in Detroit at Saint Andrew’s Hall.
“Alone” – Sleeping With Sirens featuring Machine Gun Kelly

Cleveland’s own Machine Gun Kelly laid down a verse on Sleeping With Sirens’ “Alone” for their album Feel, which dropped way back in the spring of 2013. MGK then made several appearances on Warped Tour stops that year to perform the track live. The two artists reunited to a more than welcoming crowd at the inaugural Alternative Press Music Awards in 2014.

Linkin Park teamed up with hip-hop mogul Jay-Z in 2004 for their collaborative EP/DVD Collision Course. The standout track, “Numb/Encore,” combined lyrics from each artist for the perfect mesh of rock meets rap. The DVD portion featured performances from The Roxy Theater in West Hollywood including the one shown here.

Paramore frontwoman Hayley Williams is no stranger to collaborating on tracks, but her work on rapper B.o.B.’s “Airplanes” was perhaps one of the more unexpected. The duo have performed the track live several times, but the 2010 MTV Video Music Awards was the first and greatest with the massive stage expertly commanded by each artist.

The APMAs are always full of surprises, but Coolio storming the stage to rap his own “Gangsta’s Paradise” as Falling In Reverse played their version from Fearless Records’ Punk Goes 90s Vol. 2 was one of the coolest (no pun intended). The collab was made even sweeter as the Cleveland Youth Orchestra played along and Issues’ frontman Tyler Carter also made an appearance.

Alt-rockers Imagine Dragons remixed their chart-topping hit, “Radioactive,” with rapper Kendrick Lamar’s “m.A.A.d city” for the 56th Annual Grammy Awards in 2014. The performance had both artists donning all-white garb and instruments as dramatic red lighting and fog filled the stage while Taylor Swift awkwardly danced in the crowd, an unofficial participant.

Demi Lovato and Alanis Morissette rocked the stage of the 2015 American Music Awards, performing the latters’ iconic hit, “You Oughta Know” in matching all-black outfits. And while Lovato is best known for being cool for the summer, she definitely aided Morissette in doing the song justice.

Miley Cyrus launched a video series for her Happy Hippie Foundation to bring attention to the homelessness in the LGBT community where she collaborated with artists such as Against Me!’s Laura Jane Grace and Joan Jett. Cyrus even inducted Jett into the Rock and Roll Hall of Fame at this year’s event and added more sass to “Crimson And Clover” at the ceremony with Foo Fighters frontman Dave Grohl on guitar.