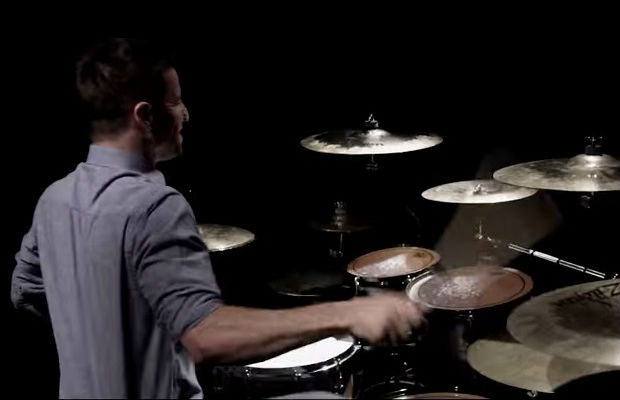 What’s the single greatest breakdown in metal and/or hardcore history? That argument has cluttered the web since the first message boards got vomited up, and will probably abound long after we’re all gone (the correct answer is the outro to Machine Head’s “Davidian,” by the way). This is not a list of the all-time best breakdowns. Instead, we’re focusing on a very specific strain: the machine-gun breakdown.

The components are simple: damped chuggery––with minimal chord changes––locked into stuttering kick-drum volleys to form a blunt, pounding groove, sounding somewhat like… machine gun fire. When done well, the result is something of such gloriously brutal mechanistic precision that when our home appliances finally rise up and overthrow their human masters, their anthem for the new world will be drawn from these ranks. Until then, moshers of every stripe will utilize them in their attempts to dislocate any and all vertebrae…

(Note: The breakdown must be identifiable as such and distinguished from intro/verse/chorus. Therefore, the likes of Meshuggah’s “Bleed,” Killswitch Engage’s “Life To Lifeless” and all of Gojira’s catalog have been disqualified, since their arguably perfect machine gun-esque passages tend to proliferate across the tracks.)

The undisputed kings of this breakdown breed, this list could probably draw from Unearth’s catalog alone and still provide a comprehensive guide to the oeuvre. But if one pushes ahead of the others, no song comes more machine gun-ny than the armor-plated beast unleashed on “My Will Be Done.”

Every track on 2003’s As The Palaces Burn is shot through with a compelling rawness, scraping against anything resembling delicate sensibilities. This outpouring of hammering bludgeoning is perhaps the record’s finest moment. Rampant, hard-as-nails and even a little bit deranged, Lamb Of God made these few seconds pure metallic perfection.

Like Unearth, August Burns Red have a great many breakdowns of this ilk spread across their discography, but this one takes the art to the next level. The propulsive, staccato attack is crushing in all the right ways, but then the guitars open up to allow in an air of almost desperate poignancy, a tone no one else has achieved.

When it comes to pneumatic chuggery, no one does it better than hardcore vets Bury Your Dead, and 2011’s riveting Mosh N’ Roll is essentially a 31-minute machine-gun breakdown. However, delving a little further back into their catalog, this early nugget of percussive devastation is the definition of merciless.

The South Carolina deathcore merchants have a few suitably skull-cracking efforts in their arsenal that could have kicked and elbowed their way onto this list, but “Erratic Perception” is their finest. Bombarding you with a torrent of bucking, snarling ugliness, they wait until the final 16 seconds before unleashing the beast. What it lacks in length, it more than makes up for in blunt force trauma.

Whether this counts as a breakdown is debatable (and has been debated, extensively), but it’s made the list nonetheless. For about four-and-a-half minutes, “One” made MTV viewers in 1988 think that those long-haired Metallica louts had actually penned a “pretty-ish” song, only for them to destroy that notion with what was likely the world’s first major-label machine-gun breakdown.

Scotland’s only entry on this list, the Bleed From Within boys show up the rest of the United Kingdom with this monstrous mosh-starter. In fact, there are two parts that could be included here: a shorter transition earlier in the song and then this one, which packs one hell of a punch behind the haunting notes picked over the top of it.

One of As I Lay Dying’s faster, thrashier tracks, it also boasts their finest breakdown, which just so happens to embody all the winning characteristics listed above. With massive sub-bass drops adding even more weight to Jordan Mancino’s pulverizing rhythmic attack, this is music designed to crack concrete.

Many parts of this track fulfill the requirements for this list, but the breakdown kicks dirt in the direction of the riffs that might wish to usurp it. With crashing cymbals helping hammer the intensity home, the mutated lead that begins to crawl over it halfway through makes this the most uncomfortable breakdown of its kind.

Honorable Mention: “If You Want To Blame Us For Something Wrong, Please Abuse This Song!” – War From A Harlots Mouth (2007)

A tongue-in-cheek entry. This ditty has an actual machine gun firing in synchronization with its groove. Leaving it off would be a firing offense.