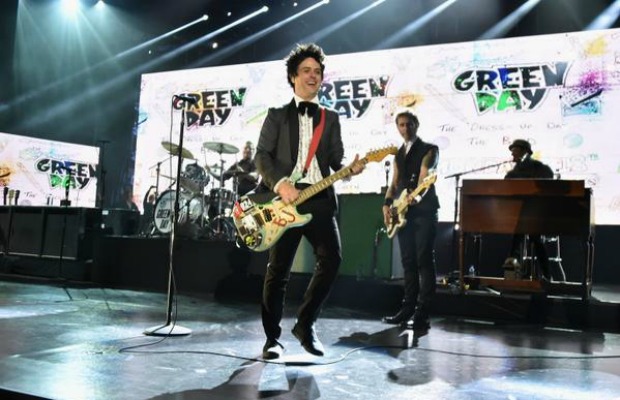 Ringo and Green Day and Fall Out Boy and Miley Cyrus and Joan Jett and sexual innuendos and tears and copious F-bombs! Holy HBO sponsorship deal, Batman! The Rock & Roll Hall of Fame Induction Ceremony hit Cleveland  April 18, and AP was there. This writer is still recovering. Here are our 10 favorite moments from this year’s ceremony.

Everyone wants a piece of @GreenDay at the @rock_hall Induction Ceremony! #RockHall2015 pic.twitter.com/EBsGfdvSZu

Most of the show’s heavy hitters strolled the red carpet outside Cleveland’s Public Hall, but Green Day were the only ones that walked past the barricades and photographers and up to the crowd—signing one woman’s Kansas “Green Day” vanity license plate and hugging a sobbing girl with appropriately dyed lime green locks. It was another special moment from a band that treated fans to many in the week leading up to inductions, including a sold out concert at Cleveland’s House of Blues.

2.) Joan Jett and the Blackhearts, Dave Grohl and Miley Cyrus open the show

Joan Jett and the Blackhearts and Dave Grohl playing a little Cherry Bomb at the Rock and Roll Hall of Fame + Museum Induction Ceremony! #RockHall2015

The night was off to a blistering start when Joan Jett And The Blackhearts blasted through a blistering take on their 1980 autobiographical takedown “Bad Reputation.” The inductees were then joined by Dave Grohl and Miley Cyrus for “Cherry Bomb,” Jett’s sneering opus with original group (and riot grrrl forebearers) the Runaways.

“I'm going to start off this induction with the first time I wanted to have sex with @joanjett.” –@MileyCyrus #RockHall2015

Though the majority of her speech was poignant and tender, the social media generation’s agent provocateur who inducted Jett into the Hall, opened with this nugget:

“I’m going to start off this induction with the first time I wanted to have sex with Joan Jett.”

Not to be outdone, Blackhearts guitarist Ricky Byrd later added, “Let me clarify something Miley—we all wanted to fuck Joan.” Thanks for the info, dude.

The new @rockhall inductee, @joanjett everybody! Inspiring as always. Congrats to you & the Blackhearts!#RockHall2015 pic.twitter.com/o5VsaXPJtD

In the press room after her induction, Jett commented on the standing ovation she received when she accepted her award. After years of being told “No” because of her sex, it was validation she never thought she’d get.

“To see the room stand up like that and applaud to that degree was pretty amazing. I was trying to not bawl. It lets you see how much….People did just not think girls could play rock 'n’ roll. The things that the Runaways were told and said to us, the nasty things that went on for years and years and years, and after the Runaways, with the Blackhearts and all these record companies saying, 'What are you doing?' They’d heard 'Rock 'N' Roll,' they’d heard 'Crimson And Clover,' they’d heard 'Touch Me,' so what’s the problem? They didn’t like the girl. So to see that whole place standing up like that, it was acceptance. It was overwhelming. It was very moving.”

5.) Fall Out Boy inducts Green Day into the Hall of Fame

Without @GreenDay there's no us, there's no @blink182…. @FallOutBoy #RockHall2015 pic.twitter.com/hY3RhdnGI1

“I guarantee you that someone, somewhere will be very pissed off when I say…that one of my all-time favorite punk bands is Green Day,” remarked Patrick Stump at the start of Fall Out Boy’s testimony to the group, a fervent and clever affair that included the shocking admission that people sometimes confuse FOB for Green Day. Pete Wentz summed up Green Day’s enduring outlier ethos when he recalled an early Billie Joe Armstrong interview: “He said ‘I don’t want to be making punk rock for the rest of my life’—sorry man, you still are! When you followed up Dookie with a single about methamphetamine, and another in two movements, that was pretty punk-rock. When conventional wisdom demanded another fast punk-rock song and instead you put down a stripped-down ballad single that became the go-to prom song for a decade, that was pretty punk-rock.

When you put out three companion albums in a year — in an era of digital singles — that was pretty punk rock.

When you put out an acoustic folk album at a time when you were fooled by obviously Green Day-inspired pop-punk, that was pretty punk rock.

When in an era of basically no socially conscious discourse in pop music, you put out a scathingly political rock opera and somehow managed to make that career-redefining, that was insanely fucking punk rock.”

The dudes went on to namecheck New Found Glory and Paramore in the press room.

6.) Green Day thanks Ford, Lookout! Records and “the Romper Room for degenerates”

Billie Joe to their manager: “I wanna apologize for the hotel room, for Tre's drum sets catching on fire… Thanks for rehab!” #RockHall2015

The boys offered a loving, often-funny thank-you to their many fans and teachers, recalling an early show where drummer Tre Cool's outfit of choice was a shower cap and tutu, the Econoline van that Mike Dirnt recalled was “the best damn van a smelly touring band could have,” and the many nights they spent sleeping on helpful strangers’ floors. Some things never change though, and Dirnt summed it up best by shrugging and saying “I love you guys. I’ll see you at band practice.”

Green Day taking us back 21 years with Basket Case at the Rock and Roll Hall of Fame + Museum Induction! #RockHall2015

The group closed off their segment careening through three of their signature tunes— “American Idiot,” “When I Come Around,” and “Basket Case.” They were the only inductees of the night that played entirely without guest performers, and Public Hall briefly burned with the intensity of a basement show.

Performance artist, musician and aesthetic wonder woman Laurie Anderson gave a moving tribute to Lou Reed, her partner of 21 years. The underground rock legend died October 27, 2013, and Anderson entreated the audience to summon his spirit with a round of rousing “Lousssss.” She also shared their three rules for life:

“Don’t be afraid of anyone”

“Get a really good bullshit detector”

The fun Beatle lived up to his reputation Saturday night, especially when he picked up a mic while the stage was being set up for his performances, essentially performing a stand-up set and telling one female fan she could have a picture, “just don’t be so crazy in the eyes.”

The real golden moment came near the end of his jolly, charming acceptance speech when he warned bands traveling together in vans: “If you fart, own up.”

10.) Ringo gets a little help from his friends

What a triumphant #RockHall2015! Congrats to all the Inductees, and cheers to #Cleveland! pic.twitter.com/bIf7CjZ8Cp

After playing a tight-as-hell rendition of the Shirelles’ “Boys” with backing band Green Day, Ringo closed the night with a goosebump-inducing finale performance of “With A Little Help From My Friends.” Introducing Paul McCartney first (or, as Ringo called him, “A guy who plays bass occasionally”), Starr was soon joined by the entire night’s line-up: Green Day, John Legend, Patti Smith, Zac Brown, Tom Morello, Karen O, Miley Cyrus, Joan Jett and more rushed onstage to sing along. The night concluded with a guitar-abundant version of “I Wanna Be Your Man.”

Bonus Moment: Legendary singer-songwriter Bill Withers absolutely slayed during his acceptance speech, calling the entire ceremony “the biggest AA meeting in the Western hemisphere.” The real zinger came from Withers’ inductor, Stevie Wonder. After Withers announced he wasn’t going to be using the teleprompter, Wonder, who is blind, replied, “I didn’t!”