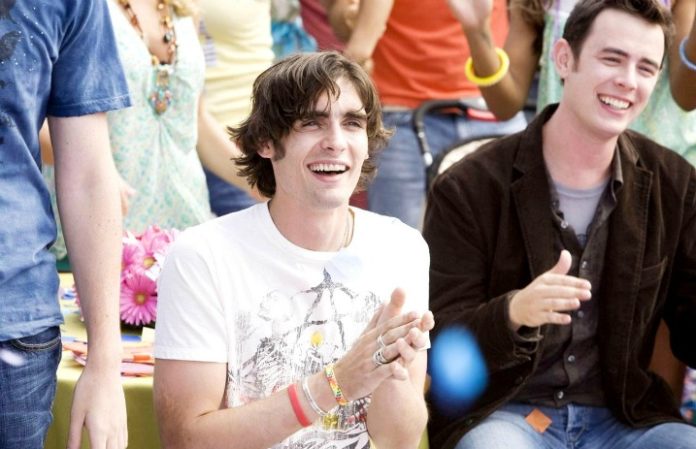 Thirty Seconds To Mars frontman Jared Leto became a household name after winning an Academy Award for Dallas Buyers Club in 2013. While not many may be as welcome as he is at both Warped Tour and the Oscars, several other scene staples have made cameos or held roles on the big screen. Check out a list of some of the more notable ones below.

All-American Rejects frontman Tyson Ritter plays the self-proclaimed “goofy dude” love interest to Emma Stone’s Natalie in 2008’s The House Bunny. One of his key scenes includes complimenting a nervously rambling Stone on her hair before asking her to be his girlfriend while Boys Like Girls’ “The Great Escape” plays in the background. (It’s so 2008.) Ritter went on to snag recurring roles in both NBC’s Parenthood and Amazon Video’s Betas in 2013 as well as this year’s Drew Barrymore-Toni Collette dramedy Miss You Already and ABC’s now-canceled Wicked City.

The pop-punk staples made an appearance in the ’90s cultural artifact, American Pie. The scene has protagonist Jim Levenstein (Jason Biggs) fooling around with Nadia (Shannon Elizabeth) while being broadcast across the internet via webcam where Blink-182 (and a monkey) just happen to be one of the viewers.

Stefani made a cameo as herself in the audience of a fashion show in Zoolander, but she stretched her acting muscles a tad more in the Leonardo DiCaprio-led The Aviator about tycoon Howard Hughes. Stefani portrayed Jean Harlow, the star of one of Hughes’ films, Hell’s Angels..

Fall Out Boy performs at the Amish coming-of-age party thrown for Rumspringa in the 2008 road trip comedy Sex Drive. Tracks spotlighted include “Fame < Infamy” and “Grand Theft Autumn / Where Is Your Boy.” The guys also have an end-credit scene with Seth Green where he makes them feel guilty over fixing their bus for free.

Good Charlotte (Not Another Teen Movie)

Good Charlotte made a cameo as the band at prom in the 2001 spoof comedy Not Another Teen Movie. They played covers of Orchestral Manoeuvres In The Dark’s “If You Leave,” the Strangelove’s “I Want Candy” and Paul Anka’s “Put Your Head On My Shoulder.

While Adam Levine has played himself on 30 Rock and in Pitch Perfect 2, the Maroon 5 vocalist has also expanded outside the realm of self-portrayal. This was first done as newlywed Leo Morrison on American Horror Story: Asylum in 2012 and then opposite Keira Knightley as struggling musician turned superstar Dave in Begin Again. While the latter has Levine playing a somewhat exaggerated version of himself, it was still impressive as his first true big screen role.

Red Hot Chili Peppers’ bassist Flea landed an on-screen role in the 1998 cult hit The Big Lebowski. Flea portrays a German nihilist breaking and entering into Lebowski’s residence to intimidate him by tossing a ferret into his bathtub, among other things. Flea has also made appearances in Back to the Future Part II and Part III, Fear and Loathing in Las Vegas, the 1998 Psycho remake, as well as voicing Donnie in Nickelodeon’s The Wild Thornberrys.

Brendon Urie isn’t the only vocalist to be transformed into a devil for the sake of art. He was preceded by Foo Fighters’ frontman Dave Grohl for the 2006 flick Tenacious D In The Pick Of Destiny where he is challenged to a rock-off by the Jack Black-Kyle Gass duo, a call back to his appearance in the video for “Tribute.”

Linkin Park’s vocalist appeared in the final chapter of the Saw series gore-fest as one of the victims stuck in Jigsaw’s game. Bennington plays Evan, a racist ringleader super-glued to a seat and the only one capable of saving his equally racist friends from the twisted trap.