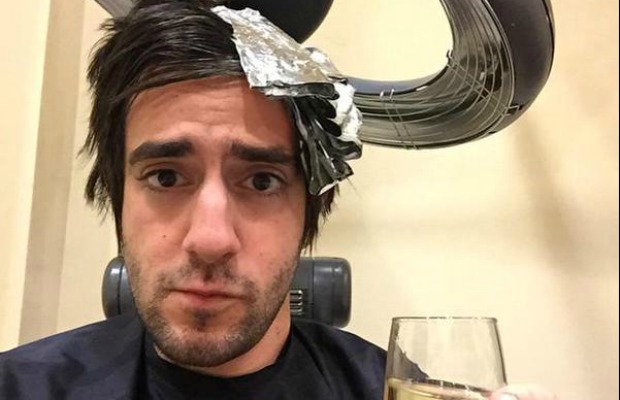 We live in a world where the front-facing camera is king and a selfie stick is a real thing, but not many have mastered the art of the selfie like All Time Low guitarist Jack Barakat. Barakat and vocalist Alex Gaskarth are known for their crude yet hilarious onstage banter, so it’s no surprise this approach carries over into Barakat’s selfie game. Here are just a few of his best posts classified by type.

Because who wouldn’t want to drink mimosas with Nick Jonas or plant one on Paul Rudd?

Stoked that #TheyCameTogether is out On Demand and iTunes this Friday, obviously it’s not about my past relationships �� #ad

Clearly Jack has no qualms embracing his feminine side with such accessories as lipstick on Future Hearts’ release day, champagne and foiled tips at a stylist or hoop earrings with the Summer Set’s Brian Dales.

Even musicians who regularly tour the world can get stoked about visiting cool places and trying new things, whether it’s as ancient as Cardiff Castle, as tasty as baguettes in the south of France, as iconic as the Apple headquarters or as simple as your own record label headquarters or a dirty Welsh joke.

What up Cardiff Castle!?

Eating a baguette in the south of France ��

Guess where I’m taking you

Barakat once used his powers for good when he found a stray gray kitten a home, but he’s also posted plenty of shots with adorable pups like Olivia and a “punky,” one-eyed lady.

My friend found this 4 week old kitten. She doesn’t have a home or a name. Let’s help her get one!

Straight up chillin with Olivia #hungover

Punky only has one eye cuz she was attacked. But she’s the prettiest lady I’ve met. And she is my lover

Plus, who can forget the pig in a bar and the horse who matched Jack’s hair?

This girl brought her pet pig to the bar! His name is Link. I love him

This is Umbo. We have the same hair

Elevator reflections…elevate the cliché mirror selfie to a new level, but Barakat has also kicked it old school in an animal print jacket with an ornate mirror, as Robin to Gaskarth’s Batman and post-show in a blue wig.

One of these dudes isn’t wearing underwear

Who wore it better?

Thanks Bologna! What a showwww

It’s no secret how much Barakat loves Home Alone–the band even named a track on Nothing Personal after a line in the first movie (“Keep The Change, You Filthy Animal”). He produced a shirt inspired by the film for JAGK, his collab with Glamour Kills, but he often sports a young Macaulay Culkin tee.

Taking the train with Kevin up to NYC for the weekend

I feel you Kevin!

Bonus: He’s also posed in front of the bridge from Home Alone 2.

The APMAs brought many bands together for endless photo ops (see the stretch limo and microphone shots for further proof), but apparently good group photos can also randomly occur with friends at stoplights.

We were driving and saw some familiar faces stopped next to us at a light! @alexanderdeleon @ryangood24

The “Something’s Gotta Give” music video took quite an unexpected turn, and this selfie gave fans a cool, behind-the-scenes look at the prosthetics and fake blood the band wore.

While not as in-depth, Barakat has also embraced his superhero side for another makeup-inspired shot.

Alcohol makes bad ideas seem like good ones, and thanks to the internet, the aftermath is forever archived. In this case, a booze-filled night produced quality shots like the flip cup alarm and a 4 a.m., bra-on-the-head “life update” with a 5 Seconds Of Summer soundtrack.

When the flip cup alarm rings, wherever we are, everyone has to report to the flip cup room to play. #DrunkerGames

Non sequitur would be the best way to describe this type of selfie because how else can you explain grabbing the junk of an Under Armour mannequin, posing with a giant bag of popcorn or making yarn puns?

At #Birdland with my bae @baltimoreorioles

This aisle is so boring it makes me yarn. Womp