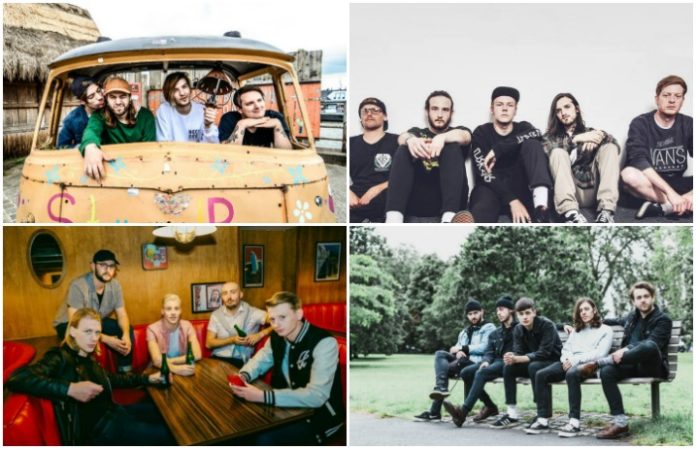 Ever since Blink-182’s Enema Of The State catapulted pop punk into the eyes of the mainstream, the genre has always been considered a pretty Americanized proposition. And yet, thanks to the global success of Neck Deep and As It Is, the U.K. pop-punk scene is thriving right now, with a whole wave of bands looking to emulate the transatlantic triumphs of these British pop-punk juggernauts. Here are 10 pop-punk bands who are killing it in the U.K.:

Yes, we know you probably already know them, and yes, we know Patty was technically born in America, but the band were formed in the U.K. and are 80 percent British, so we’re counting them. The reception to debut album Never Happy, Ever After marked As It Is down as “most likely to succeed” in the U.K. pop-punk pack, and with latest effort okay. spawning heartfelt power-pop anthems like “Hey Rachel,” As It Is look to be well on the way to superstardom.

Combining poppy hooks with A Day To Remember-style crunch, Better Than Never are one of underground U.K. pop punk’s brightest hopes. Their second EP Head Under Water dropped in December and saw the band make a serious jump in terms of quality, with latest single “Dreamland Ain’t All It’s Cracked Up To Be” possessing the kind of emotional heft that’s bound to cast a spell over many a pop-punk fan.

Check out: “Dreamland Ain’t All It’s Cracked Up To Be,” “Learning To Swim,” “Panama”

Hailing from the rainy coastal town of Blackpool, Boston Manor channel the gloom of their surroundings into an emo-inspired take on pop punk. A hugely successful 2016 saw the band emerge as the most likely to be the next U.K. pop-punk band to break on a global level, and with tunes as solid as the outer space-inspired “Laika,” we wouldn’t bet against 2017 being the year Boston Manor launch into the stratosphere.

Another band looking to break out from the U.K.’s underground pop-punk scene are Catch Fire. Debut EP The Distance I Am From You arrived last year to critical acclaim, and with the follow-up A Love That I Still Miss due at the end of March, the Nottingham five-piece will be hoping that 2017 is the year their career well and truly erupts.

Also gearing up for a March EP release, Coast To Coast’s mellow brand of pop punk is quickly gathering momentum. “Post Graduation,” the lead single from upcoming record The Length Of A Smile, is a delightfully introspective lamentation on the feeling of university coming to an end. They might have left education feeling miserable, but when it comes to pop punk, Coast To Coast have what it takes to be top of the class.

Welsh trio Junior are an interesting one. A band with a taste for wrestling—their bassist, Mark Andrews, is a rising star of the U.K. wrestling scene—and pop-punk concept records, they’re certainly a unique proposition. They’ve got the tunes to back it up, too, with latest single “Fall To Pieces,” featuring Sean Smith of the Blackout, being a sprightly power-pop-punk banger.

Check out: “Fall To Pieces,” “A House That’s Not Quite Home,” “That Pretty Dress”

They’re the current kings of U.K. pop punk, and with good reason, too. Neck Deep are dragging pop punk kicking and screaming into the mainstream, with massive choruses and a reputation as one of the genre’s best live acts. It’s looking like we may get a new album soon, and if it delivers, Neck Deep could end up as one of the biggest bands not just in pop punk, but in the whole alternative scene.

They sprung forth from the pop-punk pack with the release of well-received debut LP Backbone last year, and ROAM possess a sound that’s got enough polish and power to see them continue to make strides in 2017. Frontman Alex Costello is a hyperactive and engaging live presence, so be sure to check these boys out if they roll through your city this year.

The third Hopeless Records band on this list—Neck Deep and ROAM being the other two—Trash Boat’s sound is one that lies at the heavier end of pop punk. That’s not to say these boys don’t know their way around a poppy chorus or two; “Strangers” is a song destined to be screamed by thousands at the Warped Tour. Someone might want to have a word with them about snappy album names, though: Nothing I Write You Can Change What You’ve Been Through might be a heartfelt title for a debut LP, but it’s a bit of a mouthful.

Check out: “Strangers,” “Eleven,” “How Selfish I Seem”

WSTR—that’s “waster,” BTW—have released an early contender for pop-punk album of the year. Debut full-length Red, Green Or Inbetween is 11 tracks of pop-punk perfection, and it’s a record that could see them scrapping with their chums in Neck Deep for the title of U.K. pop-punk kings. This is a band who’ve mastered the pop-punk formula; mighty impressive for an act only one album into their career. They’ve also been known to perform a cover of Limp Bizkit’s “Break Stuff” at their gigs, which is, you know, pretty neat.