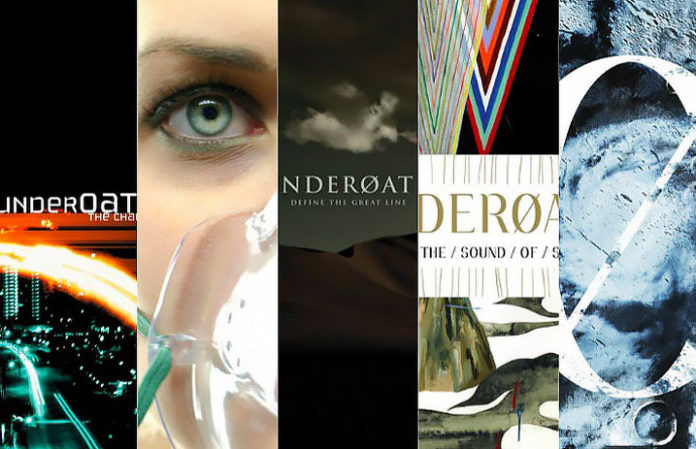 Throughout the course of their seven-album career, Underoath traversed countless valleys of heavy music, captivating not only ears but hearts as well. Whether it be the screamo-era prelude found on The Changing Of Times, the experimental metalcore of Define The Great Line or the melancholic progression of Disambiguation, Underoath were the definition of reinvention.

Regardless of what the future holds for the band, the legacy they’ve left behind on the scene is unparalleled. With their long-awaited reunion tour just on the horizon, it’s only fitting to take a look back at Underoath’s finest moments.

“A Moment Suspended In Time”

When Underoath began making substantial waves, the seamless vocal dichotomy between Aaron Gillespie’s soaring cleans and Spencer Chamberlain’s piercing gutturals proved to be a key distinction from the growing post-hardcore/metalcore pack. Define The Great Line’s “A Moment Suspended In Time” is perhaps the most pristine display of the duo’s relationship. If 0:20 through 0:45 doesn’t get your blood pumping, I’m not sure anything will.

“When The Sun Sleeps”

While certain members of Underoath may downplay The Changing Of Times, the record truly acted a prelude to the colossal screamo-era of the mid-’00s. The band’s first official lead single, “When The Sun Sleeps,” testifies to that through original UO frontman Dallas Taylor’s high-pitched yelps, keyboardist Chris Dudley’s bouncing samples and Gillespie’s youthful melodies. Also, can we take a moment to point out what looks to be guitarist Tim McTague laying waste to former riff-master Octavio Fernandez around the 4:55 mark?

“Sunburnt” was one of two final songs the band recorded before their farewell tour in 2012. On this track, we see them progressing from the musical despondency of Disambiguation, into yet another strain of pioneering metalcore.

Ah, how I miss outrageously long and sporadic song titles. This was recorded during Underoath's Chasing Safety-era and originally released on both the record’s vinyl and Japanese editions. Clocking in at just over five minutes, it showcases some of the best post-hardcore the mid-’00s had to offer—and it’s still holding that ground today. The track also comes in second on drummer Aaron Gillespie’s top-five-favorite Underoath songs of all time.

“Casting Such A Thin Shadow”

“Casting Such A Thin Shadow” is one of three much needed breaks found on Underoath’s prog-metal maelstrom, Define The Great Line—and perhaps the most memorable. The track ebbs and flows in and out of McTague and rhythm guitarist James Smith’s soothing riffs, which give way to darker tonnage that soon crescendo over Chamberlain’s piercing, larger-than-life screams. On a record with incredibly fast pace, “Shadow” is the quintessential interlude.

Being the lead track on Underoath’s breakthrough LP, They’re Only Chasing Safety, “Young And Aspiring” essentially spearheaded the band’s rise to the top; marking the beginning of something truly special. Can you just picture them losing their minds playing it on Warped Tour in 2004? . Plus, if you haven’t bedroom-moshed to the track’s final breakdown while screaming “This is my panic, this is my call to arms,” then you haven’t truly lived.

“Catch Myself Catching Myself”

Due to the way Disambiguation panned out as being too inaccessible for fans still stagnant within the Gillespie-era of Underoath, masterpiece tracks such as “Catch Myself Catching Myself” have been left widely undiscovered and under-appreciated. Bassist Grant Brandell’s gritty-yet-concrete riffage (at times difficult to personify in previous UO efforts) takes center stage here. Drummer Daniel Davison’s refreshing style and Spencer’s previously untapped vocal range are both showcased in pristine fashion.

“Breathing In A New Mentality”

Underoath just knew how to kick off a record. No matter which LP you look at, the first track is always memorable, aggressive and makes you want to break something. The super-deluxe edition of Lost In The Sound Of Separation boasts a coffee table book in which McTague claims “Breathing In A New Mentality” came together in just one practice. “It seems like every record we have has just one song that comes together with little-to-no effort and sticks with us without change,” he shares. “That’s one of our favorite parts of writing music with the same people for so long… Every once in a while, we hit that pocket and something great comes out.” And something great it is, Tim—something great, indeed.

“Moving For The Sake Of Motion”

Underoath’s candid, take-no-prisoners anatomy—one of their various modi operandi—is front and center on “Moving For The Sake Of Motion.” Between Aaron’s blistering fills, Tim, James and Grant’s Chariot-esque, tear-your-face off riffs and Spencer keeping pace with manic aggression, this is Underoath’s musical belligerence showcased through the eye of a needle.

In some ways, “Reinventing Your Exit” is a simple take on genre that was about to explode. In others, however, it’s a profound, distinguished statement within an industry that soon became overcome with unabashed rehashings. Yet again, we see Aaron and Spencer’s relationship creating a distinct disconnect from the band’s counterparts. That, along with some candid guitar work and delicate synth op-programming, created a formula that would continuously progress and quickly launch one of the scene’s most remarkable careers.