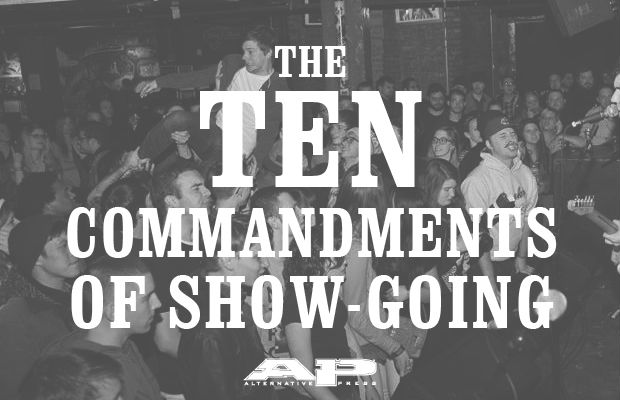 I’m about to deliver to you 10 unimpeachable, unbreakable, steadfast, hard-and-true rules about going to see live music. Let’s call them commandments. Unfortunately, despite the ability to leave comments below the article, these 10 commandments are not up for debate. Look: I’ve actively attended shows for the past 17 years of my life, and I’ve averaged seeing 120 shows a year for the past decade. That’s a show every three days for 10 years straight. I’ve probably seen all of your favorite bands live more than once, including the ones that are broken up (and especially the ones who are reuniting for a cash-in victory lap—I saw ’em the first time around). My first Warped Tour was likely before most of you were born. I get that you might think I’m an asshole by saying all this, but I argue that I’m simply laying out my credentials. Who better to create the 10 Commandments Of Show-Going than the person who goes to more shows than anyone else you know?

2. THOU SHALT NOT WEAR THE T-SHIRT OF THE BAND YOU ARE GOING TO SEE TO THE SHOW.
This one has been debated for ages, and the frequent counterargument from people who enjoy being wrong is, “If you go to a sporting event, you’d wear your team’s colors, wouldn’t you?” I sure would! You know why? Because that’s a competitive event. There are two teams trying to beat one another, and with each team comes its fans. Going to a show shouldn’t be a competition—it’s assumed that if you’re inside a dingy rock club on a Tuesday night in a bad part of town, you’re there for the same reason as everyone else is: to see the headliner. Use this opportunity to wear something other than that band’s logo on your chest. It doesn’t have to be another band’s T-shirt, either; I personally like wearing nerdy pro wrestling inside-joke tees. The reason being is because out of the 400 or so people present, you may only know a handful at best. Use your outfit as a way to connect with a stranger. If someone compliments you on what you’re wearing, that means you already have two things in common—your style and the band you’re about to see. Bam! New friend alert!

3. THOU SHALT NOT LISTEN TO THE BAND YOU ARE ABOUT TO SEE ON THE WAY TO THE SHOW.
It is totally permissible to listen to the band you’re about to go see leading up to the show—for example, I’m seeing Mates Of State tonight, so I’m going through their back catalog in my iTunes right now—but just like cramming for a final exam, you need to clear your brain right before it’s thrust into sensory overload. My personal rule is you can listen to the band you’re anticipating throughout the day in question, but I draw the line at playing said band in your car on the way to the show. That’s overkill, and in my circle of friends, it’s considered bad luck—any time it’s happened in the past, it seems like the band we were going to see were jinxed and put on a substandard show. (Listening to the band you just saw while you’re driving home is 100 percent appropriate, however.)

4. THOU SHALT SPEND DISPOSABLE INCOME AT THE MERCH TABLE BEFORE THE BAR.
Shows are meant to be festive environments, full of good friends and good tunes. I’m not going to tell you that you shouldn’t drink at a show, because that would be like throwing punches at ocean waves. But far too often I see people run up huge bar tabs then complain at the end of the night that a band’s merch was “too expensive,” sometimes even trying to convince the beleaguered merch guy to give them something for free “because they’re so poor.” Hey, Einstein: You know those $7 beers and $10 mixed drinks you’re buying? They won’t last beyond an hour. Go buy a shirt or a record first, so you guarantee you’ll have memories of the show you just attended—even if you drink them away shortly thereafter.

5. THOU SHALT ALWAYS TIP.
This goes for merch guys and bartenders. Yes, that includes people who go to the bar and just order pop or water. The cup’s contents does not change the amount of work that a bartender went into procuring it for you. Don’t be stingy. Merch guys are in the hospitality business, too, so throw them an extra buck after you buy something. Odds are, they’ll return the favor and toss you a sticker or button. And if you’re one of those people who hangs out all night by the merch and/or asks a billion questions of the merch guy and/or repeatedly exchanges merch for different sizes throughout the night because somehow you don’t actually know what size shirt you wear even though you (presumably) dress yourself every morning, holy shit, just give them your wallet and let them tip themselves appropriately for your boneheadedness. Merch tables are not information booths.

6. THOU SHALT NOT YELL, “FREE BIRD!”
I won’t say you can’t heckle a band at all, because sometimes good-natured heckling can be fun, and there’s really nothing like randomly yelling, “PAPA ROACH!” at a super-serious noise-rock band to see how they’ll react. (It turns out they react very, very poorly—sorry about that, Young Widows.) But seriously, is there anything more embarrassing than standing next to some jagoff stuck in 1996 who thinks that he is totally gonna be the king of the crowd by yelling, “FREEEEE BIIIIIRD!” and then the singer looks over and thinks it was you? Even worse: I’ve seen a handful of bands actually take those ironic requests seriously and play the entire song—all 10 goddamn minutes of it—just to punish the audience. Friends don’t let friends request “Free Bird.”

7. THOU SHALT APPRECIATE THE OPENING BANDS.
Every one of your favorite bands was once an opening band, and had you been paying attention to opening bands, you may have discovered them a year-and-a-half ago instead of when they landed on the cover of AP and headlined Warped Tour. You don’t have to go crazy for an opener, but they deserve your attention and respect until they do or say something onstage to lose one or both.

8. THOU SHALT NOT BE TOO COOL FOR SCHOOL.
I’m the kind of person who loves to be in the front of the crowd, playing air drums, wagging my finger high in the air and inventing my own high harmonies where the band foolishly decided to leave the melody alone. (Don’t they know that I know better? Sheesh.) However, I get that not everyone is comfortable acting like a buffoon in front of a few hundred people, so if you don’t sing along, I’m not gonna bust your chops. We all appreciate live music in our own ways. What I will say, though, is if you think you’re too cool to clap along to a part in a song—or, hell, clap when a song ends— get the fuuuuuck oooooooout. If you’re going to a show to act cooler than everyone at the show, guess what: You’re still at the show. Enjoy yourself or get lost.

9. THOU SHALT RESPECT SECURITY.
They’re there for your protection, folks. If they say no stage diving, don’t stage dive—and if you do, don’t be surprised when they catch you and throw your ass out. You might not like it, but they set the rules. Don’t like it? Start your own club (and enjoy the lawsuit when some dumb 16-year-old breaks his arm falling offstage). And speaking of which…

10. THOU SHALT RESPECT THE VENUE.
This isn’t your basement. You are in someone else’s place of business, and they have graciously allowed you to come forget about your worries for a few hours. Don’t punch holes in the wall. Don’t rip doors off bathroom stalls. Don’t vandalize posters and art. Don’t break bottles on the dancefloor. Don’t swing from the rafters (even though it always looks really cool, I know). Don’t start fights. Don’t start fights. Do not fucking start fights. Catch my drift? For the past 17 years of my life, rock clubs have been my form of church. You wouldn’t trash a sanctuary, would you? No. I’ve learned to treat venues with respect and reverence—because you never know when they’re going to disappear. (RIP His Cup, That One Place, the P.I.T. Skatepark, Spin City, the Divine Cup, the Cabin, the Bait Shop, the Lion’s Den, Dodge Lanes, Minglewood and countless other short-lived performance spaces in my hometown.) Appreciate what venues have provided for you. They’re in it for the same reasons you are: the love of the music.