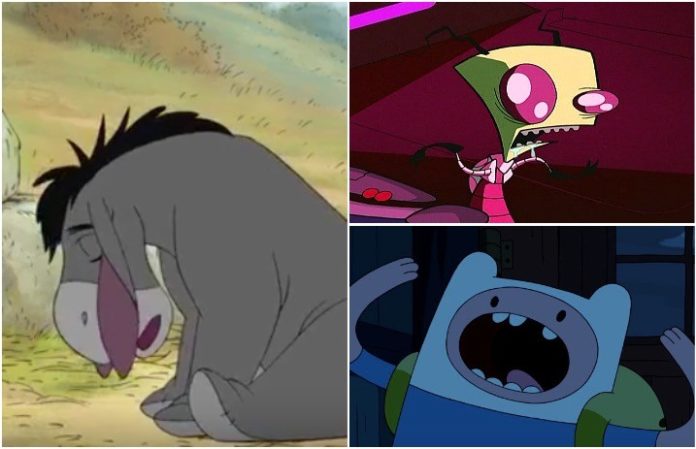 If you’re reading this, you most likely had an emo phase growing up. Or maybe it wasn’t a phase and you’re still prepared to jam out to My Chemical Romance whenever you hear a G-note on a piano. Whatever the case may be, we weren’t the only ones to rock hair that practically covered our entire face, copious amounts of black eyeliner and a slightly more morbid outlook on the world that our parents would just never understand. Here’s our pick of the top 10 emo cartoon characters who totally owned the lifestyle.

Not only is Marceline a vampire queen with a very mysterious past, but she’s also a staple of everyone’s 2007 emo phase. With an almost entirely black and red wardrobe, fierce side bangs and a knack for writing emotional bangers on her electric guitar, everyone must have been fighting to be on Marceline’s Top 8 before the Great Mushroom War took place.

Raven is probably the most dramatic example of a teenager telling her dad he “just doesn’t understand, OK?” And if your dad was an evil demon trying to get you to join him to corrupt the entire universe, you might say that, too. However, with Raven’s epic purple and black aesthetic and continuous desire to be left alone in her room, there was no way this angsty teen was not making this list.

Just speculation, but there’s no way in hell Sam Manson wasn’t named after Marilyn Manson, right? With another stellar example of fierce bangs and a wardrobe that looks like it came straight out of a Hot Topic, Sam’s secret, hidden love of her best friend Danny showcases the Lonely Hearts Club phase every emo kid had in high school.

Eeyore from Winnie The Pooh

Eeyore probably has the bleakest outlook of any cartoon character, ever. His best-known catchphrase is “Thanks for noticing me,” and he would rather stay at home than go on any of Pooh’s adventures.

Charlie Brown and Eeyore are definitely the respective present and vice-president of the Sad Boys Club. Charlie Brown is slightly less depressed than poor Eeyore, but his overall outlook on the world remains covered by that proverbial raincloud. He also knows that his parents just won’t understand him and only ever hears their lectures as muted mumbling sounds.