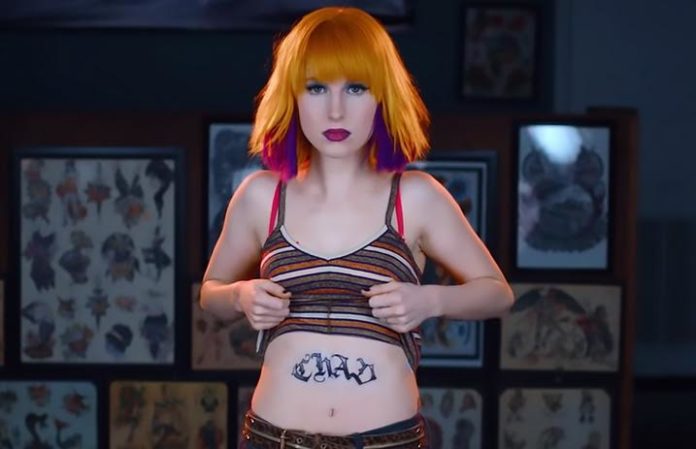 The only thing more badass than a romantic pair-up of musicians is the ensuing collaborations. Here are some standout works courtesy of the scene’s coolest couples from the past and present:

Juliet Simms and Black Veil Brides frontman Andy Biersack have numerous expressions of love in the form of ink— including Juliet’s “Andy” in script and Andy’s “Juliet” on a banner across a heart as well as hand tattoos of their nicknames for each other (Dragonfly and White Rabbit respectively) in their own handwriting. When it comes to music, Biersack made an appearance as the love interest in Simms’ “End Of The World” music video and jumped on stage to perform with her at this past Warped Tour. Before that, the duo teamed up to raise funds for the Gay Men’s Chorus of Los Angeles with the grand prize winner joining the couple on the road for two days. They raised $15,000 in one day before going onto surpass their $50,000 goal. The punk rock power couple also have partnered up to create a “Soul Mates” bracelet for Never Take It Off, where they each have their own lines (Simms also produced a replica of Biersack’s cross earring from AP 305).

Say Anything’s Max Bemis and Eisley’s Sherri Dupree-Bemis are definitely a top contender for the scene’s cutest couple—especially when you toss in their daughters, Lucy Jean and Coraline Mae, both of whom are awesome collaborations in themselves. Outside of that, Sherri has lent vocals to several of Max’s projects including Two Tongues’ self-titled full-length with Saves The Days’ Chris Conley. She also has contributed vocals to several Say Anything albums including 2014’s Hebrews, which became somewhat of a family affair. Sherri appeared on “Six Six Six” with Manchester Orchestra’s Andy Hull and Balance And Composure’s Jon Simmons, “The Shape Of Love To Come” and “Nibble Nibble” with Angel & Airwaves’ Tom DeLonge. All the members of Sherri’s family-filed band, Eisley, and Max and Sherri’s brother-in-law and Mute Math drummer Darren King also appeared throughout. Eisley’s most recent release, Currents, was recorded in the Bemis household in a studio that was built as an addition to their home. While each creatively collaborated on their independent projects, it was Perma that leads the way as the most noteworthy pair-up. The husband-wife duo launched this side project and released their debut full-length via Max’s Equal Vision imprint, Rory Records, in 2013. From it, we got awesome vocal blending and the adorable, Bonnie and Clyde-inspired “Little Light” video.

Before she was the world’s highest-paid female musician of 2015, Katy Perry was just sweating it out on the 2008 Vans Warped Tour. The punk rock summer camp is responsible for introducing Perry to her now ex-boyfriend, Gym Class Heroes frontman Travie McCoy. While on the tour, Perry and McCoy worked with the Keep A Breast Foundation, the nonprofit breast cancer awareness organization responsible for those infamous “I Love Boobies” bracelets. McCoy painted a paper mache cast of her torso to be auctioned off with proceeds benefiting the foundation, making this collab one that was more than just aesthetically pleasing.

Before McCoy, there was Relient K’s Matthew Thiessen, further proving the now pop princess has strong roots in the alternative genre. The two dated between 2003 and 2005, and as any girlfriend would, she showed her support by stagediving during Relient K’s set at Warped Tour, making their cover of Eminem’s “Lose Yourself” that much more exciting. Thiessen and Perry have also teamed up in the songwriting department, co-writing “Long Shot” for Kelly Clarkson’s 2009 full-length, All I Ever Wanted, which first appeared in a rare music video circa 2003.Thiessen also co-wrote “Dressin’ Up” for Perry’s 2010 chart-topper Teenage Dream, but it didn’t surface until the 2012 reissue. He claims Perry has penned tracks about him, because obviously what’s more inspirational than a love had and lost?

Warped Tour is obviously the place for romance with New Found Glory guitarist Chad Gilbert and Paramore frontwoman Hayley Williams first meeting there in 2007 before going public with their relationship a year later. Fast-forward to December 2014 where they are engaged and definitely going to have the most punk wedding ever. Over the course of their relationship, Williams has lent her powerhouse pipes to several of Gilbert’s projects, among them What’s Eating Gilbert’s “Babe” from 2012’s Nashville Sessions and New Found Glory’s “Tangled Up” from 2009’s Not Without A Fight and a 2015 re-release of “Vicious Love” from 2014’s Resurrection, the latter of which also came with a rad video set in a tattoo shop. While Williams has joined New Found Glory on stage before to play bass to get the band to perform “Vegas,” her energetic appearance with the band at the 2015 APMAs definitely one-ups that.

Once upon a time, Jessica Simpson’s little sister, Ashlee, tried to break out of her pop superstar older sibling’s shadow by toeing the line between pop and rock with a short-lived solo career in the mid-2000s. It was during this time that she married and had a kid (Bronx Mowgli) with Fall Out Boy bassist Pete Wentz. Before she picked up a mic, Simpson was into acting with appearances in Malcolm In The Middle and The Hot Chick and a recurring role on 7th Heaven, while Wentz had appeared in One Tree Hill, Californication and Sex Drive, so it was no shocker when they made a cameo together as a criminal couple in CSI: NY in 2009.
RIAN DAWSON (ALL TIME LOW) AND CASSADEE POPE

Country starlet Cassadee Pope used to front pop rockers Hey Monday, so her contribution on boyfriend and All Time Low drummer Rian Dawson’s Don’t Panic! full-length definitely clicked. Pope harmonizes on “Backseat Serenade” and joined Bayside’s Anthony Raneri on “So Long Soldier.” Dawson also has lent a hand to Pope, playing drums on her first solo EP, which was self-titled and released in 2012. In part, Pope is the one to thank for Dawson recently throwing himself into the producing path. In an interview with AP, he stated that he had built a studio two or three years ago where he had been helping out Pope, so he decided to open the doors to other artists.

Vocalists Beau Bokan of Blessthefall and electropop soloist Lights tied the knot in 2012 and have since given birth to an adorable bundle of joy, Rocket Wild. The couple may have drastically different music styles, but that didn’t stop them from teaming up for a fun acoustic medley. Lights kicks it off with Lana Del Ray’s “Video Games” with backing from Bokan before the latter switches it to Nirvana’s “Come As You Are.” Their perfect vocal blend and loving looks throughout is enough to make anyone melt.

While the marriage of Meg and Jack White may have ended early in their career, the White Stripes kept going proving this initially loving collaboration to be one of the most impressive. The duo obviously strayed outside the norm as Jack Gillis took his wife’s surname at their 1996 wedding and clearly kept it past their 2000 divorce. The band broke up in 2011, but the band’s discography lives on. There isn’t a person out there who can ignore the indie rock greatness of “Seven Nation Army.”

In Spite of Ourselves (John Prine cover) from KingLaceys! on Vimeo.

Brand New frontman Jesse Lacey recently welcomed a daughter named Bowie into the world with wife Andrea, but early last year, the duo were collaborating on something a little different. Jesse posted a cover of John Prine’s “In Spite Of Ourselves,” which was somewhat upbeat and therefore nothing like we’ve heard from him in the past, especially because he had vocal assistance from his wife. Andrea may be a tailor by day, but she clearly has enough pipes on her to pull this pleasant cover together.