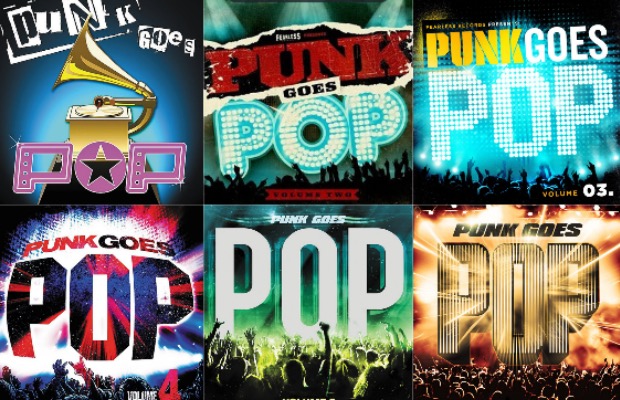 With six volumes and over 80 songs to its name, Punk Goes Pop has become quite a staple in our scene. From the classics on Volume 2, to the wave of refreshment found on Volume 6, the series has certainly proved its staying power in a world of blink-and-miss-it content. We’ve gone through each edition and picked out the 11 most notable tracks from the series’ extensive catalog.

Bayside took Sean Kingston’s reggae-fusion hit, “Beautiful Girls,” and turned it into an emo-tinged alt-rock anthem. Frontman Anthony Raneri crooning “Now we’re fussing/And now we’re fighting/Please tell me why I am feeling slighted” over a doo-wop backdrop is the Bayside moment you never knew you wanted.

In 2010, Of Mice & Men parted ways with frontman Austin Carlile and tapped former Sky Eats Airplane singer (and current Glass Cloud frontman) Jerry Roush as his replacement. Before Carlile ultimately re-joined the band in 2011, OM&M recorded one song with Roush, which was a blistering metalcore take on Jamie Foxx’s R&B hit, “Blame It.”

After a period void of activity following the release of their sophomore LP, Shaant Hacikyan brought Cute Is What We Aim For back to life with a stunning acoustic cover of T.I.’s “Dead And Gone.” Minimalist in the best of ways, Hacikyan takes the track’s original flow and steadies it to a pace everyone  can enjoy.

A Skylit Drive’s take on Eminem’s “Love The Way You Lie” also made our list of 12 Best Metalcore Covers Of Hip-Hop Songs. And for good reason: It’s everything a self-respecting metal fan looks for in a pop cover. Clean vocalist Michael Jagmin does the song’s original, Rihanna-led chorus the utmost justice, while now-former screamer Brian White counterattacks by breathing further fire into Eminem’s vicious verses.

With a little help from Taking Back Sunday’s Adam Lazzara, the Maine took Cyndi Lauper’s classic  and turned it into a sleeper contender for Punk Goes Pop’s best cover ever. While managing to stay true to the song’s original aesthetic, the Maine and Lazzara bring an unabashed rock ‘n’ roll aura to the dance-pop anthem, morphing it into the end-all, be-all of summer jams.

Secrets most certainly surprised listeners with their cover of Gym Class Heroes anthemic “Ass Back Home.” While some may have written this track off as just another unnecessarily bombastic metalcore cover, it certainly makes this list without a second thought. While you can easily vibe to Travie McCoy and co., Secrets have you covered if you’re feeling the mosh.

What happens when members of Issues and the Word Alive collab on a Paramore cover? You get Tyler Carter putting his signature twist on Hayley Williams’ melodies, while being backed by Luke Holland’s zestful, vigorous drumming—a recipe for quite an invigorating listen.

State Champs made pop-punk fans everywhere proud with their relaxed, incredibly accurate re-imagining of Zedd’s “Stay The Night.” They flawlessly walk the line between originality and staying true to the track’s original path, allowing accessibility to flow from all directions.

A Day To Remember took everything they learned on their youthful, pop-core cover of Kelly Clarkson’s “Since U Been Gone,” and applied it to their monstrous take on the Fray’s “Over My Head (Cable Car).” Grating riffage accompanies frontman Jeremy McKinnon’s soaring melodies and dastardly screams, creating the perfect atmosphere for mosh-induced sing-alongs.

OneRepublic’s “Apologize” is a masterpiece in its own right, but Silverstein introduced it as arena-ready post-hardcore. Frontman Shane Told’s immolation of the song’s chorus will have you screaming along to every word by track’s end.

NSYNC’s “Bye Bye Bye” was just meant to be an emo anthem, and Further Seems Forever made that a reality on Punk Goes Pop’s first installment. The track features Jason Gleason on vocals, who joined the band following Chris Carrabba’s departure in 2000.