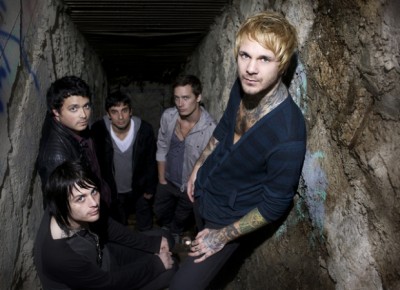 Over the next week, we'll be taking a look back at 2011 by unveiling our most popular Altpress.com features of the year—today, we share the 11 most-read reviews on Altpress.com of 2011 (and links to each in case you missed them—just click the album art to read). This is THE 11 OF 2011.

“For their first step up to the plate, Destroy Rebuild Until God Shows have done an admirable job reconciling personal motivations with their fans' expectations. “Sometimes hate can be so beautiful,” Owens sings on “The Hangman,” but as time progresses, his worldview will hopefully have changed significantly and he won't feel any need to visit the muse of retribution in an effort to strike back lyrically at those who may have done him wrong. At the end of the day, the bottom line is this: Listeners who still feel they have to take sides between D.R.U.G.S. and Chiodos' Illuminaudio need to hit the closest bottle of chill pills. Because everybody's better off, and the world's MP3 players are twice as rich because of it.” —Jason Pettigrew

2. Panic At The Disco – Vices And Virtues

“Many criticized Panic! At The Disco for making the sharpest of left turns with Pretty. Odd. as they all but abandoned their electro-emo roots in favor of a ’70s psychedelic pop reboot. Yet even though Urie and Smith have for all intents and purposes dropped the paisley vests and faux British accents and returned to their classic sound, Vices & Virtues feels sincere, not simply an attempt to reclaim listeners turned off by their last release.” —Evan Lucy

What we can successfully ascertain from Neighborhoods is this: Blink-182's members are still capable of writing good songs, but without a strong outside influence (i.e., a producer) and no real desire or effort to consistently work in the same room with one another, the amount of truly transcendent, classic material is minimal. Ultimately, Neighborhoods is a slightly awkward entry in the band's catalog that shows as much potential as it does flaws. But just as Taking Back Sunday struggled a bit with their comeback album earlier this year, you can't help but think that this album had to sound like this in order for the band to be able to move on and grow together again. Let's just hope Mark, Tom and Travis will deliver the follow-up sooner than 2017. —Scott Heisel

Well, the bad news first: This album is most definitely not Tell All Your Friends II: Electric Boogaloo. That said, it most assuredly doesn't come anywhere close to sucking, either. The excitement of early Taking Back Sunday was that they were good songs elevated by truly great performances. Ironically, as the band progressed through a series of guitarists and bassists over the next three albums, the songwriting went from good to great, but the performances began to lack that spark that made TAYF so special in the first place. Taking Back Sunday definitely benefits from both sides of the equation, as there's no question Lazzara, Reyes and O'Connell have improved dramatically as musicians over the past decade, and Nolan and Cooper have brought in that much-needed lightning which sets some of these tracks off like no TBS song has since the early days, specifically the crushing opener “El Paso,” the TAYF vibe of “Best Places To Be A Mom” and the monstrous, fist-pumping chorus of “This Is All Now.” —Scott Heisel

“Thankfully, the band, aided by longtime producer Bill Stevenson (Descendents, Black Flag), have once again tapped into that intangible magic that makes them so great, and have delivered a full-on rager with Endgame. While song lengths continue to push (or in some cases exceed) a totally un-punk four minutes, RA make better use of their time this go ’round, with the crushing, riff-heavy “Midnight Hands” benefiting from frontman Tim McIlrath actually slowing down his vocal pace—you’ll hardly even realize it’s the longest song on the album at a hefty 4:18 (practically punk’s version of a Dave Matthews Band live cut).” —Scott Heisel

“However, the band’s fifth full-length, Screaming Bloody Murder, sees the the Sums entering into adulthood—unfortunately, that process also includes all of the inevitable missteps of adolescence. This is made obvious immediately from the opener “Reason To Believe,” an upbeat anthem that unexpectedly shifts into the kind of piano ballad that probably would've made frontman Deryck Whibley snicker only a few years ago.” —Jonah Bayer

“So the jury is still out on the future of Mayday Parade, but until the band release another full-length, Valdosta is all we’ve got to go on—but it’s not a dark omen by any means. If the band can write more material as good as these two new cuts, and can increasingly stand on their own creations, there might just be a reason to listen to the next MP record. If not, the Lancaster karaoke will eventually run its course.” —Brendan Manley

“The band haven’t abandoned the downtuned, chugging breakdowns that were so key to their sound, of course; most of Reckless rumbles like a bulldozer in low gear trying to drive up a concrete staircase—when they’re not slowing down for the heartfelt sung parts. The final track, “Morte Et Dabo,” ends with an almost symphonic coda, like they’re auditioning to soundtrack the upcoming Conan movie. Asking Alexandria haven’t radically changed their sound, but there’s enough evolution on Reckless & Relentless to convince any listener that they’re more than metalcore also-rans or one-trick ponies.” —Phil Freeman

“Still, the album’s mainstream direction seems entirely logical: DeLeon’s a natural pop vocalist with a solid falsetto (“Lovesick Fool,” the string-laced “La La”), and he injects the right combination of sincerity, theatricality and emotion into Symphony Soldier’s songs. He often conjures OneRepublic’s Ryan Tedder, another vocalist whose versatility and ability to wring emotion from simple songs is impressive. The album’s diversity is also a plus; it touches on all aspects of modern pop/pop-rock without losing cohesion.” —Annie Zaleski

“On one hand, FTSK are obviously skilled at writing picture-perfect uptempo pop-punk: “Keep On Bringing Me Down” might be their best song since 2008’s Underdog Alma Mater, and the pogo-ready “Summer Song” and “Bipolar Baby!” are breezy, ebullient swaths of feel-good pop-rock. But when the quintet (keyboardist Kent Garrison tendered his resignation earlier this year) veer into more electronic, dancey territory (“Life Of The Party,” “Robots & Aliens”), things lose steam quickly.” —Evan Lucy

“Forging a hooky hardcore sound that in places nods in the direction of Ignite, Evergreen Terrace and A Day To Remember, the quintet know their way around a gnarly riff and like to get up in the face of anyone listening, though it is in the more melodic moments that they make their mark.” —Dan Slessor