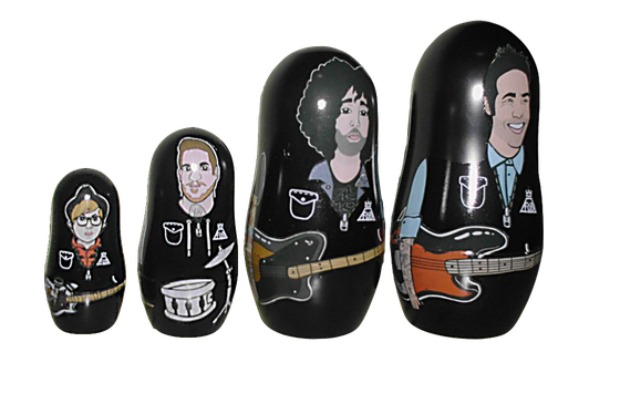 Shirts, shorts, hats, and hoodies are so 2014. This year, bands are upping the ante and getting creative with their merch choices. We’ve compiled a list of some familiar memorabilia as well as some weird items that makes you wonder: Who would want to buy the Used’s foam middle finger?

1. Falling In Reverse “Bang Bang” Booty Shorts
If you’ve already grabbed a pair of these, you can make your wildest dreams come true with the revival of the infamous “Mrs. Radke” bottoms.

3. The Maine’s Pillowcase
The Maine have designed the perfect pillowcase: One side says, “can’t stop sleeping” and the other, “won’t stop sleeping.” Either side you pick, hitting the snooze button never felt so good.

5. Riff Raff Will Call Your Mom
No, this is not a joke. For mere chump change, Riff Raff will call your mom and talk to her for at least two minutes. The real question is, can your mom talk to Riff Raff for two whole minutes? Other outrageous items include: Skyping with your grandparents, naming and Instagramming your new puppy, drawing a concept tattoo for you and attending your bachelor party.

6. Whitechapel Wrapping Paper
Because nothing says “Happy Birthday, Jesus” quite like wrapping gifts while listening to the band’s Xmas friendly song “Hate Creation” and drinking some eggnog.

8. The Story So Far Grinder
It’s safe to say the song “Spark Fires” isn’t about Parker Cannon being a pyrotechnics enthusiast.

9. The Wonder Years “Hank the Pigeon” Flip-Flops
The dudes of TWY say it’s never sunny in south Philly, but their merch table begs to differ. In addition to the flip-flops, the band also had a “Hank the Pigeon” beach towel. Plus, their beach ball is still in stock just in time for summer.

10. Jordan Buckley’s (Every Time I Die) Original Drum Pad Art
The guitarist of Every Time I Die draws original artwork on a small drum pad for (almost) every show the band plays. The highest bidder of the night gets to keep the one-of-a-kind gem, which is also signed by the rest of the group.

11. Paramore Trunk Set
A limited edition, two-piece trunk set is definitely one of the oddest choices for band merch, but if you’ve ever wanted vintage ooking Paramore luggage, you’ve hit the jackpot. The lyrics “we cross the world while it’s asleep” curve over the old world map with the band’s name printed on both sides. 12. Fall Out Boy Nesting Dolls
The Russian fan base might be big enough for FOB to create this traditional merch item, but it’s a novelty here in the USA. These wooden doll versions of the dudes of Fall Out Boy are all quietly nesting inside Pete Wentz.