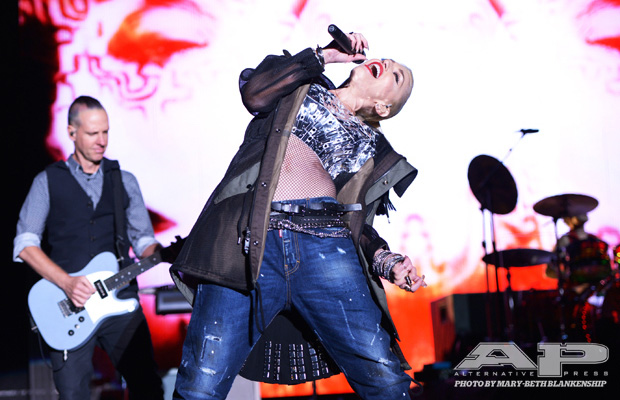 Settling into its new home of Douglas Park (after a falling out with prior space Humboldt Park), the Chicago installment of Riot Fest returned this weekend for another triumphant, muddy, eclectic year.

As it was my first time attending, I went in without expectations, and with only a plan to soak up everything I possibly could over the fest's three days and seven stages of constant music. Though trumpeted as a punk event, Riot Fest is so much more, and I found that not only were some of the best parts unrelated to the scene, but also sometimes even non-musical. A “grown up” fest for fans of punk and more with legendary performers both big and small, Riot Fest attracts a community as diverse as its bill. Hearing stories of property destruction in years past, I assumed it might be rowdier. That was not so much the case—though the park was left looking rough after three days of being treaded on by 10s of thousands of feet; here's hoping Chicago understands this time. It was, however, an unforgettable time, and we've recounted 13 best things about Chicago's Riot Fest 2015 below.

THE FULL ALBUM SETS
Last year, Riot Fest celebrated its 10th anniversary by asking ten bands to play their essential albums in full. While this year’s event didn’t have anything quite as ambitious lined up, full album fervor was still in full swing, and a diverse crop of artists opted to play some classic releases (or not, in a certain rapper’s case), at least one as a last-minute surprise.

They say absence makes the heart grow fonder, and that’s certainly how I felt watching The Academy Is… Man, I’ve missed this band. Initially meant to serve as both a 10-year celebration of their beloved debut Almost Here, and also as a farewell show, William Beckett & co. took the opportunity to announce a proper return and accompanying reunion tour. Good thing, too, because all of the feels could not be confined to just one weekend in Chicago. Watching this group of guys effortlessly play these songs again, energized by a hometown crowd, was unreal; it’s like they never left.

Aside from The Academy Is…, Rancid’s …And Out Come The Wolves performance was was on the absolute high points of the weekend. Having just turned 20, Wolves remains one of most influential records in modern punk, and, over its sprawling 19 tracks, represents Rancid firing on all cylinders. Older, but no less intense, Tim Armstrong, Lars Frederiksen and the rest of the band proved that nostalgia in no way represents irrelevance. Never sounding fresher, they bridged the gap between some of Riot Fest’s older legacy acts and the younger generation of punks. Their larger than life Wolves backdrop was also pretty epic, and I would like one for my living room immediately please. Oh, and CM Punk showed up before the encore, despite being on the fest's “not allowed” list alongside selfie sticks and Justin Bieber.

Though not initially listed among the full-album sets, Bayside surprised us by playing their sophomore self-titled disc, which turned 10 just a few weeks ago. Bonus!

Plenty of other artists joined in on the full album fun as well. Ice Cube invited along MC Ren and DJ Yella to tackle a remixed version of their N.W.A. classic Straight Outta Compton, perfectly coinciding with the runaway success of their new biopic of the same name. The Ataris kicked off Saturday with a Blue Skies, Broken Hearts… Next 12 Exits set; an album that didn’t get nearly enough attention in its day. Modern Life Is War celebrated 10 years of Witness on an intimate stage. Even Snoop Dogg was scheduled to play his debut Doggystyle in full, but, instead, took the stage over 20 minutes late and still managed to charm the crowd by performing a random smattering of hits; because, you know, he’s Snoop Dogg.

THE AFTER SHOWS
If you like your shows served with a side of more shows, then Riot Fest is definitely the destination for you. All throughout the weekend, and even including an Academy Is… pre-festival outing, Riot Fest’s after shows provided chances to see some of the best bands on the bill in intimate clubs scattered all over Chicago. This year, faves like Taking Back Sunday, Rancid, Alkaline Trio, Thrice, Alexisonfire, and even Drive Like Jehu and The Dead Milkmen took part.

I caught exactly one of these events (but remained profoundly jealous of each) because, you know, sleep. A last minute add-on, Against Me! took the stage at Concord Music Hall just hours after playing one of the best sets at all of Riot Fest. Without the confinement of a short festival slot time, they performed nearly twice as many songs, allowing them to include lesser-played tracks like “Two Coffins” and dust off some older faves like “T.S.R. (This Shit Rules).” After shows are also a great way for fans without festival tickets to take in some great music, and if Against Me!’s packed house was any indication, the people of Chicago took full advantage.

There’s been a lot of backlash lately about the lack of women on festival lineups, and, while most everyone could stand to up the ratio, Riot Fest included, the ladies still had a strong showing this year in Chicago. Bands like L7, Against Me!, Babes In Toyland, Speedy Ortiz, The Joy Formidable, Cayetana, Skinny Lister, The Airborne Toxic Event, The Coathangers, Barb Wire Dolls, Skating Polly, Foxtrott, Alvvays, and Twin River made for an extra memorable Riot Fest. And, of course, the biggest band of the whole weekend, No Doubt, are fronted by one of the most iconic women in music: Gwen Stefani.