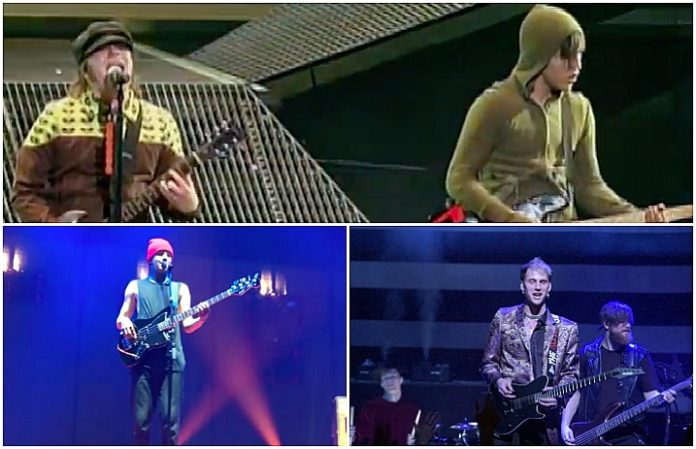 The main reason to check out a band live is to hear them play their own tracks, but sometimes they throw in the added bonus of a cover. Head below to hear some of the best takes on songs by other artists that bands have added to their live setlists.

Fall Out Boy frontman Patrick Stump played the riff from “Beat It” at soundcheck, which led to the band playing the full track live on the 2007 Honda Civic Tour. They eventually recorded their version in the studio with a guitar solo by John Mayer and released it as part of their Live In Phoenix CD/DVD in 2008.
http://www.mtv.com/news/1586226/fall-out-boy-released-beat-it-by-accident-but-still-dream-of-world-tour-with-michael-jackson/

The Summer Set frontman Brian Dales’ first concert was Bruce Springsteen (complete with his own plastic guitar), and he has since seen the Boss upwards of 15 times. This fact makes the Summer Set’s cover of Springsteen’s “I’m On Fire” from his iconic 1984 album Born In The U.S.A. less than surprising.

PANIC! AT THE DISCO (QUEEN)

Panic! At The Disco began covering Queen’s “Bohemian Rhapsody” live on 2014’s the Gospel Tour, which also stemmed from messing around with it in soundcheck. The track was then released as an official recording in 2016 via the Platinum-selling soundtrack for the DC anti-hero (and now Oscar-winning) flick Suicide Squad.

Back in 2012, Sleeping With Sirens released If You Were A Movie, This Would Be Your Soundtrack EP, which consisted of acoustic versions of some of their own tracks. The EP also featured their cover of Goo Goo Dolls’ “Iris,” which they occasionally toss into their live sets.

On both U.S. legs of the Emotional Roadshow, Twenty One Pilots brought out their opening acts to assist in a cover mashup. The first epic round featured Mutemath and Chef’Special assisting in a take on the Top Notes’ “Twist And Shout,” Celine Dion’s “My Heart Will Go On,” Justin Bieber’s “Love Yourself” and House Of Pain’s “Jump Around.” The second half (which was Black Eyed Peas-approved) called upon Jon Bellion and Judah & The Lion for a mix of Chumbawamba’s “Tubthumping,” Blackstreet’s “No Diggity,” “Jump Around” and Black Eyed Peas’ “Where Is The Love?”

The Killers frontman Brandon Flowers tackled Iggy Azalea’s “Fancy” at the height of its popularity in 2014. As an added bonus, drummer Ronnie Vannucci Jr. did an interpretative dance while Flowers belted it out on the piano.

It’s no secret that Machine Gun Kelly is a huge Blink-182 fan (and he even performed “Dammit” with the band in 2013). While MGK has covered various tracks of theirs over the years, including stripping down for “What’s My Age Again” and an acoustic rendition of “I Miss You,” his best was when he picked up the guitar for “All The Small Things” on his Alpha Omega Tour.

Issues had a sick Pokémon theme setup for their Warped Tour 2016 set, from drummer Josh Manuel’s Pokéball kit to their amps. It was perfect timing, as a few weeks into the tour, Pokémon Go launched (and someone even found one during Issues’ set). The band embraced the concept of their setup by covering the theme song as part of their introduction. A few months later, Manuel, vocalist Tyler Carter and Cry Venom’s Jacky Vincent (ex-Falling In Reverse) put out an official cover of the track.

Our Last Night have quite a YouTube presence with millions of views on their videos of them covering everyone from Imagine Dragons to Katy Perry to Adele. Before hitting the road with Hands Like Houses and the Color Morale in November 2016, Our Last Night recruited their respective frontmen, Trenton Woodley and Garret Rapp, to help them take on Major Lazer’s track “Cold Water” featuring Justin Bieber and MØ. They posted the cover to their YouTube channel, and the trio then performed the hit live on the Face To Face Tour.

AGAINST THE CURRENT (MARK RONSON/BRUNO MARS)

Much like Our Last Night, Against The Current also have quite a YouTube following of their covers and original tracks, proven by their 1.6 million subscribers. Against The Current recruited Set It Off frontman Cody Carson and guitarist Dan Clermont for a cover of “Uptown Funk” by Mark Ronson featuring Bruno Mars for the former’s channel. The two bands then hit the road for the Glamour Kills: Spring Break ’15 Tour, where Carson joined the band during their set for the cover.

I Prevail made their debut in December 2014 by posting a cover of Taylor Swift’s “Blank Space” to their YouTube channel. The track appeared on their Heart Vs. Mind EP that same year and quickly went viral, later being certified Gold. In 2015, the band signed to Fearless Records and the track was released again on the label’s re-release of Punk Goes Pop Volume 6. They have since dropped their debut full-length, Lifelines, in October 2016, but they still play the cover live.

Jimmy Eat World frontman Jim Adkins hit the road for a solo tour in the summer of 2015. He played a mix of JEW hits and covers of everything from Cyndi Lauper’s “Girls Just Wanna Have Fun” to the Everly Brothers’ “Give Me A Sweetheart,” the latter of the two which were released digitally via his single series that same year. However, it was Adkins’ take on Rihanna’s “Only Girl (In The World)” from his solo trek that stuck out the most.

Pop-punk act 5 Seconds Of Summer famously garnered the attention of pop heavyweights One Direction, leading to 5SOS opening up for them on 2013’s Take Me Home Tour. It was here that the two bands united on stage to perform Wheatus’ “Teenage Dirtbag” (and engage in an end-of-tour pie fight).

In 2003, Bowling For Soup recorded a cover of Britney Spears’ “…Baby One More Time” for the body-swap teen flick Freaky Friday starring Lindsay Lohan and Jamie Lee Curtis. The track appears in the film and on the soundtrack (and definitely puts Chad Michael Murray’s in-movie version to shame), but it was also re-released in 2005 via Bowling For Soup Goes To The Movies.