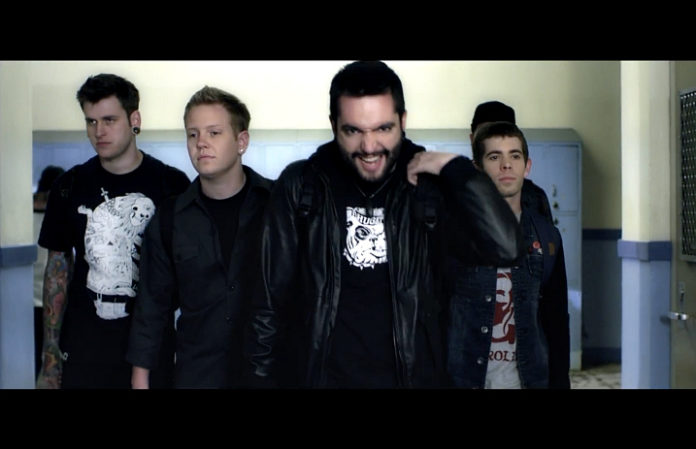 Pep rallies. Driver’s ed. SAT prep. For anyone who attended high school, these keywords will bring back vivid drama-filled, bathroom-graffitied memories. From varsity football games to awkward slow dances, we’ve got you covered with all of our favorite high school-oriented music videos of the past few decades. We hope this list will receive the highest marks and you won’t have to “see us after class”:

The song that defined the grunge era. With the world “teen” in the title, it only makes sense that this iconic tune tops our list. Inspired by punk films of the late ’70s, the video turns a typical pep rally into an anarchist’s dream, winning the band two VMAs the following year.
FUN FACT: “Smells Like Teen Spirit” was the first mainstream project for director Samuel Bayer, who went on to direct music videos for other rock acts such as Green Day, Marilyn Manson and My Chemical Romance.

A truly unique track with its spoken-word format, Nada Surf’s debut single is anything but sugarcoated. Each verse offers sarcastic advice directly out of Penny’s Guide To Teen-Age Charm And Popularity, and the video involves a cheerleader two-timing two different footballers who are later revealed to be friends.
FUN FACT: The video for “Popular” was styled by Andrea Linett, who went on to be the founding creative director of Lucky magazine in 2000.

This early Blink single tells a story of the ideal first girlfriend, a fantasy we can all relate to at the start of puberty. Starring Melrose Place star Alyssa Milano, this video is lighthearted and comical as we follow the band in their endeavors in teenage romancing.
FUN FACT: The first video for “Josie” involved the band members being submerged in a flooding garage while playing their instruments, but that idea was eventually scrapped for this version.

The debut single by Maryland pop-punkers Good Charlotte is a shout-out to underdogs everywhere. The band takes the morning announcements to a whole new level as they take over their school with their loud sound and matching black and red outfits.
FUN FACT: “Little Things” was featured in the comedy flick Dude, Where’s My Car? It plays as Jesse and Chester compete to be cooler than supermodel Fabio in the car next to them.

Fueled with clips from teen rom-com Loser, the title of this adolescent anthem says it all. Similar to “Josie,” the video captures the pursuit of yet another love interest (played by American Beauty’s Mena Suvari), only this time it ends with the suitor finding out it was all a dream.
FUN FACT: The song was inspired by the 1984 murder of Gary Lauwers in Northport, New York—the band’s hometown.

In a tribute to the classic Rodney Dangerfield film Back To School, Sum 41 visually recollect the importance of high school sports as they go head-to-head with their school’s diving team. They show that it doesn’t take skill to win the gold—just a lot of balls!
FUN FACT: The part where guitarist Dave Baksh rises out of the pool to play his solo pays homage to Guns N’ Roses’ video for “Estranged.”

If there were ever a song that perfectly described the youthful sentiment of “Nobody understands me!” this would be it. Filled with Schadenfreude, the video features the members of the band getting injured while trying to win over the same girl, while the nerd gets the girl in the end.
FUN FACT: “I’m Just A Kid” has been featured in three different movies: Grind, The New Guy and Cheaper By The Dozen.

As it goes in the laws of high school: Stick to the status quo. That is the unfortunate mantra iterated in the more serious video for Linkin Park’s critically acclaimed hit, exposing the harmful truths of bullying and the consequences that arise from it.
FUN FACT: The majority of the video was shot in the Czech Republic. The only parts filmed in America were clips of the band performing.

Here’s one for all of the private school pupils out there. This video is the living embodiment of what it feels like to be a misfit—just listen to that intro monologue! As long as you’ve got your squad and a caddy’s worth of croquet mallets, everything will be, well… okay (we promise).
FUN FACT: “I’m Not Okay (I Promise)” was named No. 1 on Fuse’s 25 Greatest Videos Countdown, beating out greats like Green Day’s “Basket Case” and the aforementioned “Smells Like Teen Spirit.”

They say nice guys finish last, but it is the geeks who will inherit the Earth! The band looks positively adorkable in the video for this mid-2000s smash hit, tearing up the dance floor at their school’s homecoming dance in stylish plaid slacks and huge glasses.
FUN FACT: The picture on the back of the book that drummer Andy Hurley is reading on the bleachers is the album art for From Under The Cork Tree, on which the song is featured.

Talk about putting the “bitch” in Alpha Bitch! In this emblematic hymn, flame-haired Hayley Williams fights fire with fire against the school’s biggest bully—revealing her true colors underneath all the paint and padding. Moral of the story? Just be yourself.
FUN FACT: Right before his solo, you can actually see guitarist Josh Farro almost smack his bandmate Hayley in the head with his instrument. Whew, close call!

The promo track for the dark comedy Jennifer’s Body, “New Perspective” creates an alter ego exuding what every high schooler desires deep down: coolness. The members of P!ATD stroll the halls enveloping the chaotic drama surrounding them, only to find out later that they were the cause of said drama.
FUN FACT: The band never saw Jennifer’s Body before they wrote the song. Instead, they saw an early screening of it later on and heard the song in the scene where the characters are getting ready for prom.

You ever have one of those days where it just feels like nothing's going right? For many of us during high school, that might’ve just been the daily grind. ADTR brings that notion to life in this anti-bully chant, bringing their fellow students together to get their rightful revenge.
FUN FACT: “Lauderdale” is in reference to Fort Lauderdale, about four hours away from the band’s hometown of Ocala, Florida. Members of the band noticed signs reading “Fort Lauderdale” one night while walking along Drexel Road in West Palm Beach.

Ah, detention. If you often found yourself pulling pranks over pulling grades, then this word was probably music to your ears. In this catchy video, we get a glimpse of how each member of Misterwives landed themselves in trouble and eventually watch them break free of their prison (literally!).

FUN FACT: “Reflections” was produced by Bryan Fryzel, whose other production credits include work on Melanie Martinez’s Cry Baby and the Summer Set’s Stories For Monday.

Every parent wishes for their child to be the picture-perfect scholar. For the lads in 5SOS, this wish is far from perfect. This action-packed video is the pinnacle of teenage rebellion, where we see the boys turn an all-girls school into an all-out riot.FUN FACT: “Good Girls” takes place in a women’s reform school, but that sure isn’t where it was filmed… It was shot in an abandoned prison!