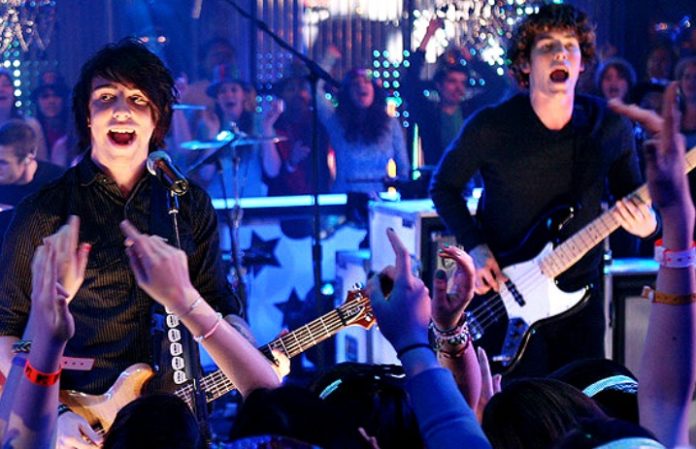 You also can catch Panic! At The Disco ringing in the new year on NBC’s New Year’s Eve Game Night. But before we welcome 2016, why not prep for the New Year by taking a walk through yesteryears’ best performances celebrating the holiday?

Introduced by one of the early 2000’s queens of Hollywood, Jennifer Love-Hewitt, along with Carson Daly, Green Day nails “Scattered” before vocalist Billy Joe Armstrong tackles “Good Riddance (Time Of Your Life)” alone with his guitar. Armstrong gets about halfway through before admitting he’s “really fucked up,” laughing and continuing on with one of the most memorable NYE performances.

blink-182 have performed at a handful of live NYE broadcasts throughout the years, but it was the 30th Anniversary of Dick Clark’s Rockin’ New Year’s Eve that truly captured the essence of the trio with their performances of “their brand new single” at the time, “The Rock Show.”

Pop-punkers Sum 41 performed an energetic medley of “In Too Deep” and “Fat Lip” to a pumped up crowd ringing in 2002.

Hearing a trucker hat-wearing Ashton Kutcher talk about Warped Tour is so 2003, it hurts. He was joined by “Sk8er Boi”-era Avril Lavigne, Carson Daly and actress Brittany Murphy, the latter of whom introduced Good Charlotte as “the last live band of the year,” an honor they cemented with a performance of “The Lifestyles Of The Rich And The Famous” and shout outs to New Found Glory, MxPx and more.

“Jumper” is one of the most popular sing-a-long tracks to come out of the late ’90s/early 2000s, so it made sense for Third Eye Blind to spotlight it in their performance to close out 2002.

The Foo Fighters covered AC/DC’s “Back In Black” with actor and Tenacious D frontman Jack Black. You know, because he’s back in black.

Simple Plan performed their own “Addicted” earlier in the night, but once the clock struck midnight, they returned to the stage with a mash up of covers. The pop-punkers kicked it off with Pink’s “Get The Party Started” and closed out the night with the Black Eyed Peas’ “Where Is The Love?”

The All-American Rejects teamed up with Fall Out Boy (or The Fall Out Boys if you’re Nelly) for this cover of the Cars’ classic track, “Let The Good Times Roll,” which was pretty much the most perfect way to end 2005.

Panic! At The Disco performed “This Is Gospel” on Fox’s 2014 NYE broadcast, but their live debut on NBC to close out 2006 definitely takes the cake with the emotional display in the middle of Times Square for “I Write Sins Not Tragedies.”

If All Time Low had played anything other than “Poppin’ Champagne,” then it would have been a major missed opportunity.

Just a few months after what would end up being the Academy Is…’s final full-length, Fast Times At Barrington High, was released, the Chicago indie pop act performed one of its singles, “Summer Hair = Forever Young,” to a more than welcoming crowd.

Plain White T’s essentially held a big ol’ group sing-a-long in the final 30 minutes of 2009 with this performance of “Hey There Delilah.”

If Adam Levine wasn’t available then the Gym Class Heroes tapping Bad Rabbits’ Fredua Boakye to assist with vocal duties on “Stereo Hearts” instead was definitely a good call.

Fall Out Boy performed a few tracks during the Ryan Seacrest-led live broadcast, but it was the fire-fueled “My Songs Know What You Did In The Dark (Light ‘Em Up)” that stuck out the most.

New Politics hit the stage running with their infectious hit single, “Harlem,” to get the crowd pumped up to ring in 2014.

The Fray threw it back to 2005 with their emotional, piano-driven single, “How To Save A Life” for ABC’s 2014 special.