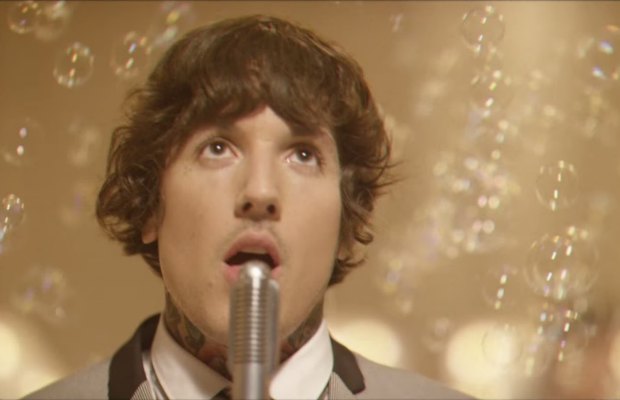 What makes for a great sing-along? Relatable content, easy-to-memorize lyrics, gang-vocal choruses and fun or challenging melodies certainly help. For their superb use of at least one of those elements, all of the following 2014 songs qualify volume-all-the-way-up-red-light-wailing where you’ll sacrifice your dignity with passionate yelping no matter how intently the people stare.

ANTARCTIGO VESPUCCI – “I’m Giving Up On U2”

Just break up with someone? Super-sick of a friend who isn’t putting any effort into your relationship? Just not feeling Bono since he forced his way into your iTunes? Prepare your vocal chords for the chorus of this delightful ditty. It’s only one line. It’s also the title. Repeat it thrice.

When this song, which confidently tackles the subject of domestic abuse with an empowering rallying call, came out, we described it as “a battle cry” that gave listeners conduit for screaming out their pain. “Listen to the sound of your children revolting,” indeed.

BLEACHERS – “I Wanna Get Better”

As lyrics go, there are a lot to remember in the fast-paced “I Wanna Get Better,” but the chorus, which you should be able to pin down in a listen or two yelling at the top of your lungs, proclaiming your motivation to transform to the world. Because who doesn’t “wanna get better” in at least one facet one’s life?

BRING ME THE HORIZON – “Drown”

BMTH’s surprising return song takes a page from Thrice’s book with its huge melodies and simple, touching lyrics, which are are perfect for falling into during emotional desperation. Warning: Sing-alongs to “Drown” may come with tears.

CHIODOS – “Under Your Halo”

2014 might go down in scene history as the year Chiodos, noted orchestral metalcore band, released the perfect pop song. Those blessed with the vocal range to fux with Craig Owens sing-alongs in the first place have probably found themselves belting this more than a few times.

I mean, did anyone expect Fall Out Boy to follow up Save Rock And Roll with new material that would do anything less than make people sing dramatic proclamations by the stadium-full?

This raucous single from Frank Iero’s debut solo album mirrors its Stomachaches brother track “Weighted” in that the chorus sounds like you should be singing it arm-in-arm with 10 of your best friends at a basement punk show, stomping your feet to a drum line that punctuates every word.

If you’re looking for a sing-along challenge, let Issues’ Tyler Carter push your limits by selecting any song from the band’s self-titled album. Start with “Never Lose Your Flames,” a melismatic, nü-metalcore anthem that dares you to take the world’s discouragement and shine through it.

While being super-fun, this song’s infectious, digestible chorus is also making a pretty rad statement you don’t often hear from dudes who are actively trying to get with girls: “Hey, I noticed you seem to be attracted to girls, not me. That’s chill. I’m going to back off.”

Modern Baseball show you just how easy it is to sing out to this heartfelt song in their music video, wherein a crowd of their fans take the sing-along to its most intense form: shoulder-jumping and finger-pointing.

Singing along is not necessarily something that's easy to do to Motionless In White, but they made it super-easy this year when they introduced “Reincarnate” to their set on Warped Tour, instructing with a 1-2 count for the audience to yell back “YOU MAKE ME FUCKING SICK!”

“There ain’t nothing I can do to make you stay!” is not only the heartfelt resignation in No Devotion’s debut song that you can most definitely wail along to with dramatic hand gestures directed to the ceiling for the full effect.

PLAGUE VENDOR – “My Tongue Is So Treacherous”

Okay, so maybe most average humans can’t actually sing along to this song, but I mean, if you want to try to screech along to the 25-second-long high “E” that opens this song, go for it.

SIO vocalist Cody Carson takes us to church with this song’s full-blown, stomp-clap Gospel vibe, prime not only for singing along, but for throwing your hands up in praise while you’re doing it.

SLEEPING WITH SIRENS – “Kick Me”

With sharply punctuated, harsh monosyllable words like “shit” and “kick” resounding through the chorus, this swear-laden anthem is the perfect song to shout along to when you feel like the world has thrown just one thing too many your way.

You may have to swim through a bit of fuzz to get to them, but the official lead single from Gerard Way’s debut solo album showcases vocal abilities Way hasn’t really been able to show off in the past and has some fun high harmonies ready to challenge your own private collaboration. For more high-range exercise, check out “How It’s Going To Be” from Hesitant Alien.

More often than not, this was sung around the AP office this year with other two-syllable words inserted in the chorus, where vocalist Dan Lambton sings “I know I’ve got loose ends”—usually “I know I’ve got Real Friends!”

The fun of singing Taking Back Sunday songs used to be that whole dueling vocalist thing, where you had to map it out with a friend to make it work, like, “Okay! You be John; I’ll be Adam!” and you’d play duets (don’t tell me you’ve never done this. Puh-lease). Now there are fewer parts to memorize, but much more smooth legato lines which roll off the tongue in such a satisfying way. “Flick•er, flick•errrfaaaaade.”