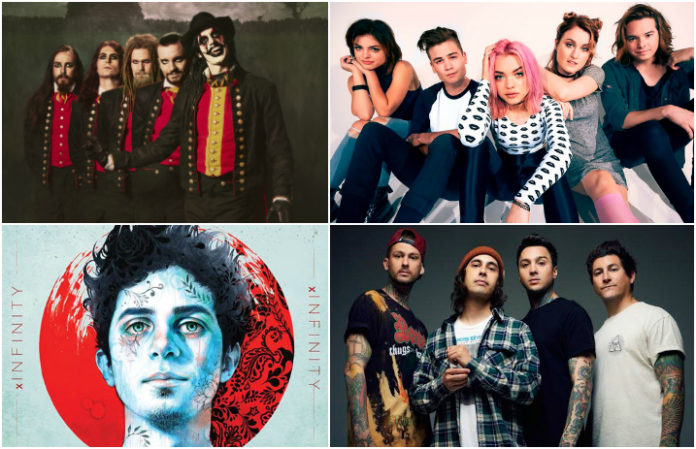 As much as 2016 has been a Dumpster fire of a year, the one nice thing is we got some sick tunes out of all the wreckage. We compiled a list of the 20 best tracks we’ve heard this year—hopefully we’ll use them to soundtrack taking back the world in 2017. Here are our favorite songs of 2016, brought to you in partnership with our friends at Full Sail University.

After teasing fans with an array of cryptic messages for a week, AFI revealed not one but two new songs with the announcement of their impending 10th album AFI (The Blood Album). Darker and heavier than anything we’ve heard from the band in recent years, there’s something about “White Offerings” that’s reminiscent of Sing The Sorrow while still sounding fresh and new. —Rabab Al-Sharif

ANDY BLACK – “WE DON’T HAVE TO DANCE”

With lyrics as poignant as Andy Biersack’s gaze, “We Don’t Have To Dance” is the lead single from the Black Veil Brides frontman’s solo debut, The Shadow Side. The track spotlights Biersack’s rich vocals laid on top of an infectiously catchy chorus, creating a result that allays BVB fans while ushering in a new generation of listeners. Defining a new age of rock ’n’ roll, “We Don’t Have To Dance” possesses tastefully poppy elements contrasted with spotless instrumentation that sets up the scene’s “Homecoming King” for an impeccable and cool-as-hell solo career. —Caitlyn Ralph

ARCHITECTS – “GONE WITH THE WIND”

The fifth track off Architects’ latest record, All Our Gods Have Abandoned Us, was immediately praised by the metalcore community upon its release, though at the time few knew exactly what the track was about. As the summer of 2016 saw the tragic loss of Architects’ guitarist and lyricist Tom Searle to cancer at the age of 28, “Gone With The Wind” immediately took on new meaning as the lyrics directly began to reflect Searle’s own internal struggles and acceptance of his approaching end. In what has arguably become the metalcore scene’s Blackstar, fans remember Searle with the beautiful yet haunting lyrics, “Do you ever wonder how deep you can sink into nothing at all?” —Natasha Van Duser

AVATAR – “THE EAGLE HAS LANDED”

“The Eagle Has Landed” is easily one of the catchiest metal songs in 2016. Paired with an intriguing one-take music video, this song is the highlight of Avatar’s concept album Feathers & Flesh. “Ladies and gentlemen/your hero has returned again/Everything is going to be okay!” —Stevie James

This piano-and-organ-backed Springsteen-esque vignette of a lost soul is deceptively effortless songwriting, the sort of earworm hook writers search for their entire careers. There’s a lot of resolve in the chorus lyric (“Mary, the world wants to bring you down/But don’t you let ’em”), and Bayside frontman Anthony Raneri’s richly detailed storytelling paints a picture of a New York night as stormy as the title character’s trials. “Mary” isn’t just the best song on Vacancy—it’s possibly the best song Raneri’s ever written. —Evan Lucy

Unlike Mark Hoppus’ (+44) songs directed toward Tom DeLonge, “San Diego” is more heartbreaking than venomous. On the California standout, Hoppus and guitarist Matt Skiba bid a conflicted farewell to friends lost in the shuffle as life pulled them different ways, with a little nod to the Cure thrown in for good measure. But, as sad as it is to think about the dissolution of Hoppus and DeLonge’s relationship, the bassist’s new musical chemistry with Skiba, as shown on this song, has us super-excited about where the band will go next. —Evan Lucy

BRAND NEW – “I AM A NIGHTMARE”

When you release a total of two songs in a span of seven years they better be good, right? Luckily, Brand New do not disappoint. The track is certainly more upbeat than anything heard on 2009’s Daisy (but when have Brand New ever written anything that sounded like the previous record?) and has a hook that will be stuck in your head for eternity—or at least until they release some more new music. —Rabab Al-Sharif

Capsize take it back to the early days of post-hardcore/metalcore with “Tear Me Apart” and the record it comes from, A Reintroduction: The Essence Of All That Surrounds Me. Those who grew up worshiping early Underoath and Taking Back Sunday can cling to this single like a lost-and-found teddy bear. “Tear Me Apart” is full of raw emotion and does an excellent job of overlaying the clean and unclean vocals. It truly sounds desperate, which is what you need to sound authentic. —Taylor Markarian

Whether it’s the comfortable ruts they’ve carved or the limited skill sets of their members, many bands stick around too long, way after their ability to inspire, thrill and captivate has evaporated. When the Dillinger Escape Plan announced their intention to commit metaphorical euthanasia on themselves, they did it when they fucking knew it was time, not critics or fans. And by the sound of “Limerent Death,” the opening track from their final album Dissociation, they’re leaving a cauterizing sear on metal, hardcore, prog, noise rock and electronica. This song only proves how maddeningly relentless they were at the end. The rest of the world’s “heavy bands” need to get down on one knee, accordingly. —Jason Pettigrew

Emarosa returned this year with 131, and “Helpless” was the single that demonstrated the shift in their sound, from an edgy feel to a more emotional one. Lead singer Bradley Walden sings expressively on this track, and the funky drum pattern is layered with swinging guitars that seem to be a nod to classic pop. Most of all, there’s a catchy chorus, and for that it became their hit. Walden’s voice has caught people’s attention, and the transition has also allowed the band to shine with their groovy patterns. —Nikhail Gogia