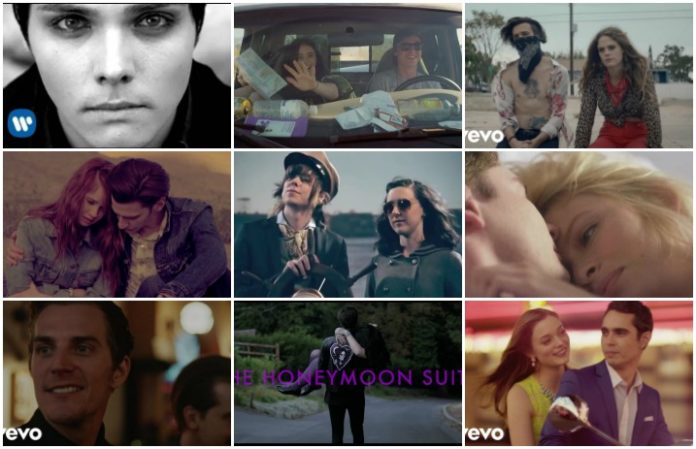 While a good rom-com could definitely put you in the mood for next week’s candy heart-covered festivities, why not get in touch with your romantic side by giving these music videos a spin. Here are 25 of the most romantic alternative music videos.

The 1975’s “Robbers” was one of the first times frontman Matty Healy was able to show off his acting skills. This Bonnie and Clyde-inspired love story is filled with drugs, guns, money and blood. With more views, more details surface—making this video as irresistible as the track itself.

If you think this is a typical high school tale, you’re wrong—there’s an adorable twist at the end, complete with frontman William Beckett’s endearingly confused “me?!” gaze.

Catfish And The Bottlemen – “Cocoon”

Telling the story of two lovers in a mental hospital, Catfish And The Bottlemen’s “Cocoon” is a dark, sad, romantic story. While star-crossed, the protagonists find a twisted kind of peace at the end of the clip because, as the lyrics say, “Fuck it if they try and get to us/‘Cause I’d rather go blind/Than let you down.”

Everyone needs a good goth love story—and there’s just something about two leather jacket-clad punks in love that’s so darn cute. Creeper have an addition to their crew in “The Honeymoon Suite”: a heart-wrenchingly adorable couple, complete with their purple and black aesthetic.

frank iero andthe cellabration – “She’s The Prettiest Girl At The Party, And She Can Prove It With A Solid Right Hook”

“She’s The Prettiest Girl” comes from Frank Iero and Co.’s first LP Stomachaches—when the band were still under the moniker the cellabration. Its video tells a quirky love story with a simple, heartwarming message: There’s a someone for everyone.

Arguably one of the most romantic songs in the scene, “Goodnight Moon” has an equally romantic music video—at the onset, at least. However, halfway through, comedic chaos erupts, turning this sweet story into a wedding day nightmare. The couple gets the happy ending, and, really, that’s all that matters.

The hit single from Green Day’s 21st Century Breakdown, “21 Guns” shows the concept album’s protagonists Christian and Gloria being shot at in an eery room. Doesn’t sound too romantic, right? Well, it doesn’t until Christian and Gloria just make out in the middle of everything. Coupled with Billie Joe Armstrong’s post-American Idiot black locks, “21 Guns” is a punk’s perfect Valentine’s Day video.

“Ghost” has a sensual music video shot in Tokyo. Halsey, deeply in love, starts to see the apple of her eye slip away—turn into a ghost, if you will. While steamy, the video places Halsey’s emotions and despair at the forefront, forming a devastatingly romantic clip.

The Killers – “Shot At The Night”

The Killer’s “Shot At The Night” tells the story of a woman employed by housekeeping at a fancy hotel in Las Vegas. She’s quite obviously annoyed at the extravagant city—and everyone having fun in it—until she accidentally runs into, with her car, a handsome date for the evening. Let the exhilarating fun ensue.

Listen to any of LANY’s songs, and you’ll get that Paul Klein and Co. are quite the romantics. However, with the video for “ILYSB,” the rising indie pop band decided to take the song’s beautiful lyrics and turn them into a twisted tale of how extreme love can actually drive you crazy. This is one for all you psycho romantics—enjoy.

The Maine transformed the lyrics of “English Girls” to avoid making the typical boy-meets-girl-at-the-bar music video. Instead, the Maine injected some of their humor, wit and originality into the story, centered on John O’Callaghan really trying to be romantic. But—is that shot at the beginning just getting him drunker and drunker throughout the video? Your call.

Man Overboard – “How To Hide Your Feelings”

This video takes you on a wild ride. First, you think the main character is trying to get away after breaking up with his partner. Then, it looks like he’s on a road trip to her, sending her super aesthetic and romantic polaroids at each stop along the way. And then… well, watch and find out.