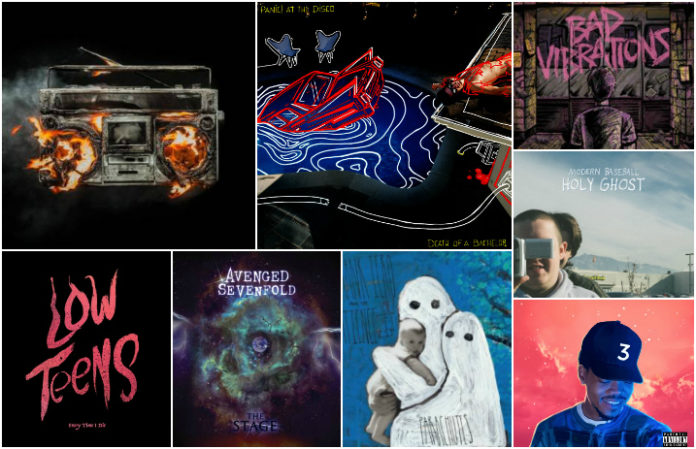 Do you have any idea how many records are released in any given year? That’s okay, neither do we. We do know that there are thousands of records that come out every year, from manufactured pop stars to local church choirs, and all of them are hoping to get your attention. So through all the noise, here’s what stood out. Check out our favorite albums from 2016, brought to you in partnership with our friends at Full Sail University. And for some more awesome albums, check out our favorite debut albums from 2016.

Bad Vibrations marks the first time A Day To Remember have written and recorded in a totally collaborative environment since 2007’s For Those Who Have Heart. And as the band attested in their cover story in AP 338, the writing and recording process was an intense one, full of self-doubt, insane amounts of pressure and the occasional sonic squabble. In the end, the band’s ability to juggle all of their ideas in a brand new, uncomfortable creative environment—and still find new ways to move their sound forward musically—has resulted in arguably their best album since Homesick.

Andy Black – The Shadow Side (Republic)

In his Andy Black full-length debut, Black Veil Brides frontman Andy Biersack chases his dark muse against a cinematic backdrop of impressive pop ’n’ roll on The Shadow Side. These songs don’t back away from the arena-ready bombast of ’80s Bruce Springsteen and U2, a sound that suits the charismatic singer like high-end couture without sacrificing the postmodern theatrics or Biersack’s commanding voice.

Chaos is as much a celebration as it is confrontation. Frontman Fronzilla pushes positivity and partying when he's not calling out both the hater population and the climate of political correctness. This is Southern mosh meets nü metal meets ridiculousness.

Straight up? Avenged Sevenfold’s new album is compelling because the SoCal quintet unashamedly continue to embrace their larger-than-life arena-rock ambitions, while genuflecting at the altars of the gods of hard rock and metal before them—on their own terms.

Aggressive is probably the most compelling statement you’re going to hear for the validity of heavy rock music in 2016. Caleb Shomo ducks and weaves his way through moments that are downright commercial (“Sick Of Me,” “However You Want It Said”), teeming with throat-shearing bluster (“Always Dead”) or the kind of thing that gets you fitted for a straitjacket (“Censored”). And if you’re looking for a new anthem to articulate your frustration of the scene, Shomo’s got you covered: “Rock Is Dead” is on point in its conviction (“I’d rather be dead than bored out of my mind/If rock ’n’ roll’s dead, you can kill me right now”).

That California even exists is something of a miracle. Just a few years ago, when Blink-182 were wrapped up in a very public stalemate—largely driven by founding guitarist/vocalist Tom DeLonge and his inability to commit to making the band his priority—it seemed quite possible we’d never get another album from the legendary pop-punk group again. But with DeLonge now on the sidelines (for how long is unknown, as he claims he’s still a member of the band and never tendered his resignation) and Alkaline Trio’s Matt Skiba in the fold, it seems like bassist/vocalist Mark Hoppus and drummer Travis Barker are back to something that’s been lacking in the Blink universe for the past few years: fun.

Chance The Rapper – Coloring Book (none)

On his third mixtape, Chance The Rapper blends gospel praise with his signature brand of misfit-rap. He continues to prove that no musician needs a label (or even charge for his creations?) to find incredible success.

In 1982, Descendents released their debut, Milo Goes To College, and those 22 minutes changed the face of punk forever. With their mixture of LA punk and a decidedly more melodic pop sound, pop punk was born. It’s a big deal when this band releases an album (this is only their fourth since 1987), and it's easily one of the best in a stellar catalogue.

The Dillinger Escape Plan have created nearly two decades of art on their own terms, challenged heavy music's rules with every album and elevated an entire genre in the process. Dissociation might be the final stop on this journey, but in 10 years, it's also the first thing we'll point to when people ask why these guys are still relevant.

It’s been 15 years since Every Time I Die dropped their debut full-length album, and a decade-and-a-half later, the heavy hitters haven’t lost an inkling of steam. Their eighth studio record, Low Teens, might not start off with guns blazing, but it does ring out as a classic Every Time I Die release if ever there was one.