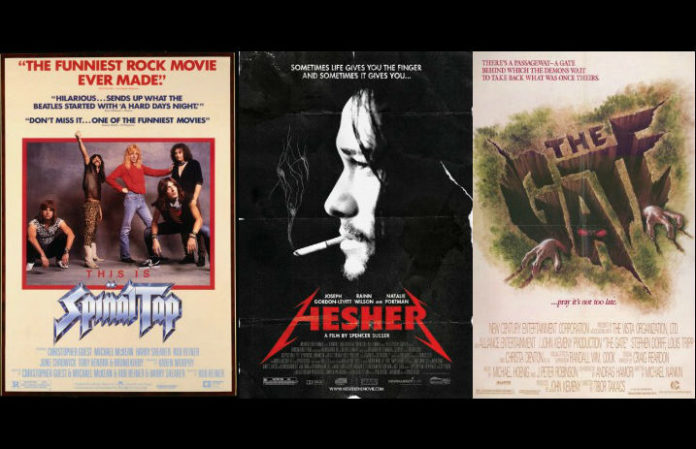 Author Mike “McBeardo” McPadden’s Heavy Metal Movies: Guitar Barbarians, Mutant Bimbos & Cult Zombies Amok In The 666 Most Ear-And-Eye-Ripping-Big-Scream Films Ever! is as awesomely exhaustive as its subtitle suggests. Of course, no list (even one with 666 entries) will ever feel complete—just as any list will always be debated. Especially a list with a category as broad as “metal movie,” which can include anything from Lamb Of God’s As The Palaces Burn documentary DVD to The Exorcist for various reasons. For this list, let’s skip band docs and concert films like Anvil: The Story Of Anvil and Metallica: Through The Never, true life tales like Heavy Metal Parking Lot and Metal: A Headbanger’s Journey as well as broader reaching horror fare most metalheads love because of the imagery and themes shared with the music. This is a group of movies which all have a direct tie to the heavy metal genre, specifically metalhead characters and heavy metal story points. These six metal movies are all flicks worthy of inclusion in any metal music fan’s queue.

Wikipedia rightly calls this movie “metalsploitation” as it certainly played on the once widespread fears that the mere act of listening to heavy metal music could lead to all sorts of mayhem. Fictitious band Black Roses turn small town kids into heavy metal fans and, um, evil monsters (d’oh!). King Kobra, whose transgender vocalist is now known as Marcie Free, mostly performs the music of Black Roses.

“Backmasking” is a technique where a message gets dropped into an album in a form that sounds like nonsense, but reveals itself when the vinyl is spun backwards. Kids ruined plenty of turntables in the ’80s looking for such hidden messages, some of which were real, some accidental and others simply imagined. The Gate begins with teenagers throwing a party after a pair of hapless parents leave for vacation, but that’s where the similarities to other movies end. The action really begins when two boys unwittingly open a demonic portal by playing a heavy metal record backward. One of the boys is Stephen Dorff, best known as the villain in Blade, in his film debut.

The most recent entry on this list features some A-list firepower, including Joseph Gordon-Levitt as the title character, Natalie Portman and The Office’s Rainn Wilson. This small indie, the debut of writer/director Spencer Susser, should have been huge. Gordon-Levitt based the look, feel and vibe of his wraith-like, near-supernatural character on the late Cliff Burton, legendary bassist for Metallica, who lent the film the use of their music and trademarked logo. “Hesher” appears to a family frozen by grief, shaking up the world of everyone he meets with anarchic gusto. Often dark, often funny, this dramedy ultimately carries a positive message.

Denim and leather, disaffection, a group of blue collar teens whose moral compasses shift in multiple directions: River’s Edge centers around the murder of a young girl and the aftermath of the heavy metal kids caught up in it. The best thing about River’s Edge (apart from the soundtrack featuring Slayer and Hallows Eve) is how intelligently it treats its characters and how spot on the performances are. This is a real movie, with real drama and real stakes, using heavy metal culture as backdrop. River’s Edge stars Keanu Reeves, Crispin Glover and the late Dennis Hopper.

Not to be confused with the 2007 horror anthology Trick R’ Treat (which is also rad), Trick Or Treat is a tale of bullying and revenge gone too far. Eddie Weinbauer aka “The Ragman” is a small-town high school kid who just doesn’t fit in. He has one friend and the pair are teased without mercy by the local jocks. Weinbauer loves heavy metal bands like Megadeth, but his absolute hero is the fictitious Sammi Curr. After the rocker’s death, a radio DJ gives Eddie the only copy of Curr’s final album. Playing the album backward brings Curr back as a vengeful spirit, whose murderous rampage spins wildly out of control. Marc Price, the actor best known as next-door neighbor Skippy on TV’s Family Ties, played Eddie. Trick Or Treat features cameos from Gene Simmons of Kiss as the radio DJ, and Ozzy Osbourne as an anti-heavy metal evangelical preacher.

Yes, this is a “mockumentary.” Yes, Spinal Tap satirizes the trappings of heavy metal. But not only are the trials and tribulations of the band relatable to anyone who has been on tour in any capacity, but there’s no way to make something as brilliant as Spinal Tap without a genuine love, appreciation and understanding of the subject matter. This is required viewing for anyone in a band and everyone who loves heavy music. The body of work from Christopher Guest, Michael McKean, Harry Shearer and director Rob Reiner is too massive to list here; here’s a few of the properities with one or more of their names attached: When Harry Met Sally, Stand By Me, The Princess Bride, The Simpsons, Best In Show, Waiting For Guffman, Better Call Saul…