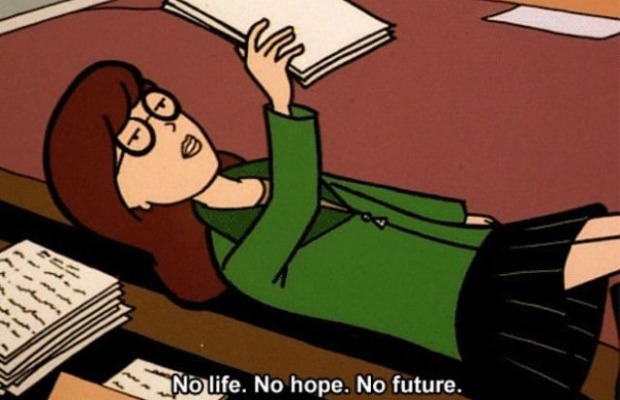 Disclaimer: This list will probably anger a few people, mainly because the factors I use to deem these cartoon characters “emo” will be seen as stereotypical. I mean, labeling people who keep journals, write songs on some sort of stringed instrument, wear thick-rimmed glasses and have an attitude that’s a little bit sad, a little bit snarky and, of course, a little bit hopeful, emo? That’s just crazy talk! These eight cartoon characters are a varied bunch—from paranoid babies to dour squids—but they all share several characteristics that make them quintessentially emo. Something tells me this group got their hands on a few copies of Do You Know Who You Are? and Something To Write Home About during their formative years.

Whether he was making thoughtful observations (“I think I’m afraid to be happy, because whenever I get too happy, something bad always happens”), asking profound questions (“Why can't I change just a little bit?”) or offering up great one-liners (“Nothing takes the taste out of peanut butter quite like unrequited love”), Charlie Brown did gloom and doom oh so well. Need more proof? Check out This Charming Charlie, a blog that combines the Smiths’ lyrics with Peanuts comic strips, or 3eanuts.com which removes the last panel of the comic strip, turning it into unresolved existential despair.

2. Chuckie Finster from Rugrats
(Rugrats aired on Nickelodeon off and on from 1991-2004)

Daria was more sass and snark than sad and mopey, but she did have that whole brooding thing going on that is popular among the emo kind. (“I don’t like to smile unless I have a reason,” is just one of her great deadpan lines.) Although, come to think of it, she also once said, “There is no moment in life that can’t be improved with pizza,” so maybe she’s really a pop-punk kid. Oh Daria, you tricky gal, you.

He kept a diary (sorry, Doug—journal), fantasized about being a superhero, wrote songs for his crush Patti Mayonnaise on his banjo and wore sweater vests long before the hipster set made them cool. Doug may have been a major fan of the Beets, but one listen to Diary and he would have been singing the praises of Sunny Day Real Estate. (Whereas his best friend Skeeter Valentine, probably would have been into West Coast punk like Lagwagon and NOFX.) If Mineral’s upcoming reunion tour makes a stop in Bluffington, Doug will totally be there.