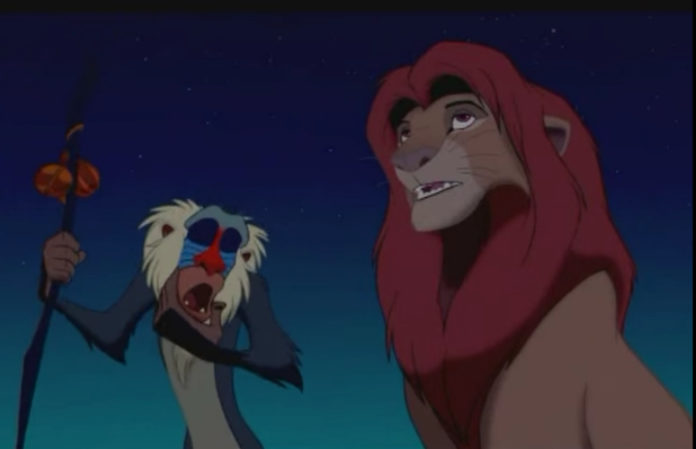 The three key components most often talked about in a quality Disney movie, with some exceptions, are as follows: a strong-willed princess fighting for a cause, a charming rapscallion who attempts to woo her and a cantankerous or unwitting animal sidekick. However, this seemingly simple formula leaves out what could be considered the most important factor of all: a crazy old person or animal to help our young heroine open her heart.

Rafiki – The Lion King
Key quote: “The past can hurt. But the way I see it, you can either run from it, or learn from it.”

Let’s start out with the crazy old sage from Disney’s greatest movie. While The Lion King lacks the prototypical princess in a lead role, Simba needs far more guidance than most Disney characters. Some of that is on him: He’s a lackadaisical fool hanging out with two musically-inclined outcasts in an oasis far from home. The rest—the part where his uncle murdered his father and blamed a cub/child—is clearly not his fault. Either way, Rafiki’s wisdom, combined with some peculiar weather, is the first thing to give Simba a glimpse at the right way to handle his next step.

Mama Odie – The Princess And The Frog
Key quote: “When you find out who you are/you find out what you need/Blue skies and sunshine/guaranteed”

The only reason every word of “Dig A Little Deeper” isn’t in the key quote section is because it’s just too long. While it’s sound advice to give to a pair of humans-turned-frogs desperately seeking to return to their own skin, it’s something anyone having trouble finding themselves could stand to hear. The Princess And The Frog was likely Disney’s final major 2D animated movie, and it left us with one of the best original soundtracks of all time and more than one important lesson. It just so happened that the majority of those lessons came from the mouth of a 197-year-old blind lady living in a swamp.

Gramma Tala – Moana
Key quote: “The village may think I'm crazy/or say that I drift too far/But once you know what you like/well there you are”

There’s something to be said about the word “crazy.” For many, it holds a significantly negative connotation—far too many people use it as an insult or a way to ostracize someone they just can’t quite understand. Sometimes it’s simply used because the speaker lacks the vocabulary to properly voice their thoughts about someone stepping outside the norm. No matter why it’s used, simply removing it from the equation does a disservice to the ideas it can convey when used properly. Stepping outside of the norm to explore what you love is beautiful and yes, it can be a bit crazy.

Grandmother Willow – Pocahontas
Key quote: “Young man, sometimes the right path is not the easiest one. Don't you see?”

This quote is just a small piece of a greater scene where Grandmother Willow tries to teach John Smith the importance of putting down weapons. A close runner-up comes just a few lines earlier, when she dips her vine in the water to start a ripple: “So small at first, then look how they grow. But someone has to start them.” The wise old tree’s advice might have helped convince one fictional invader to choose his voice over his sword, but it’s something more people can take to heart to create more bridges.

Genie – Aladdin
Key quote: “All right, Sparky, here's the deal: If you wanna court the little lady, you gotta be a straight shooter. Do ya got it? Tell her the TRUUUUUUTH!”

Genie has a few advantages over the rest of this list—phenomenal cosmic powers, a never-ending catalog of impressions and a taste for the dramatic—and one very distinct disadvantage: a magical obligation to remain at the service of his master until his contract is complete. While Aladdin doesn’t directly focus on its strong-willed princess, the titular character makes the wise choice to keep Genie around as a confidant and adviser rather than waste all three wishes at once. Throughout the entire movie, Aladdin just wants to find love with Princess Jasmine, one of the few wishes that remains beyond the reach of those phenomenal cosmic powers. Instead, Genie provides our charming rapscallion with the most important advice a young person in love can follow.