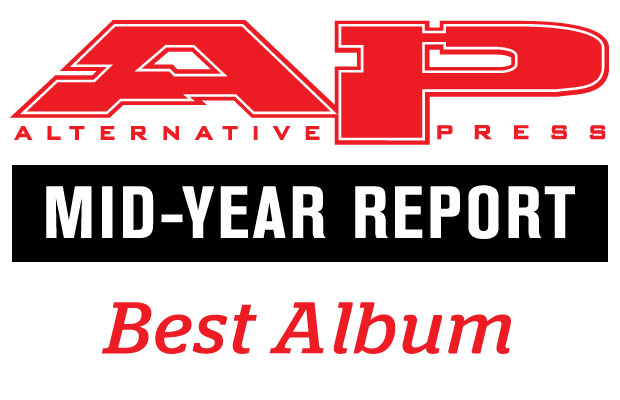 Another half-year has passed, so it’s time for AP’s annual mid-year report, where we break down the best of the best so far. With the cut-off date of June 30, we gathered our top picks and are kicking it off with best albums today. Stay tuned all this week for best singles, videos and most anticipated for the rest of the year.

Arriving nearly four years after 2010's slight misstep, White Crosses, Against Me!'s latest, Transgender Dysphoria Blues, is the product of change. Change within the group's lineup (the loss of both drummer Jay Weinberg and bassist Andrew Seward), change in their business approach (Against Me! self-released and self-produced the album), and, most significantly, change in frontwoman Laura Jane Grace's gender identity. Grace came out as a transgender woman in 2012, and, unsurprisingly, this major life event dramatically informed the thematic approach of her writing. Transgender Dysphoria Blues is a concept album of sorts, but one informed by Grace's experiences; the struggle, frustration and anger of navigating life with gender dysphoria, all wrapped around universally relatable core emotional themes. The sonic intensity that backs these tracks, which range from subdued and earnest to in-your-face punk aggression, largely a throwback to the band's earlier, rawer releases, helps make this not only one of the best albums of 2014 so far but also one of the year's most important. —Philip Obenschain

Take one look at this year's Warped Tour mainstage (or most of our magazine covers for the past year), and the message is clear: Metalcore isn't going away any time soon. Now, there's nothing inherently wrong with that; metalcore done well is thrilling, the kind of stuff that gets your blood and your fists pumping. The problem is, most metalcore would rather be mindlessly aggressive than actually innovative, and copies of copies of copies are flooding the scene. Now, I'm not saying Beartooth are a metalcore band by the strictest definition of the term, but they comfortably exist in that scene based on their touring partners and frontman Caleb Shomo's previous life leading Attack Attack!. Thankfully, Shomo didn't let himself get bogged down with whatever's “in” currently in heavy music, instead creating Disgusting, a wholly original, unique take on punk-influenced, metal-tinged hardcore that, at its essence, makes you want to fuck shit up in a major way, but upon deeper listens reveals some seriously disturbing lyrical themes that just might help out a kid in need who doesn't know where else to turn. A word of advice to the myriad pretenders to the throne currently slogging it out on nine-band package tours where everyone looks, sounds and acts the same: Fear the Tooth. —Scott Heisel

Few bands can cover the cross-section of rock fans quite like the Hold Steady. You'll find a demographic rainbow of true believers from dads and hippies to hardcore kids and sorority girls. Teeth Dreams has the comfort and consistency of your favorite T-shirt. The singles do their job selling it (the street-smart “I Hope This Whole Thing Didn't Frighten You” and wide-eyed “Spinners”), but they're trumped by deep cuts where singer/storyteller Craig Finn tells of American sadness (“On With The Business”) and chicks with therapists (“Big Cig”) before guitarists Tad Kubler and Steve Selvidge contribute a twangy instant classic (“Runner's High”).  —Brian Kraus

La Dispute are among the few bands to receive a perfect five-star review from AP this year and for good reason: Their third full-length is an exotic, intoxicating fever dream of spoken-word screamo and glistening alt-rock. “But I guess in the end, we just moved furniture around,” Jordan Dreyer shouts in “For Mayor In Splitsville,” saying more with those few words than most can with paragraphs. What Rooms Of The House lacks in traditional aggression is made up for in sonic urgency. “Hudsonville MI 1956” and “Stay Happy There” burst with surging shouts, but there’s more to the band this time around: The moody “For Mayor In Spitsville,” the album’s definitive track, feels more like a rock song; while the mellow “Woman (In Mirror)” is a flickering escapist ballad. La Dispute have not only bettered themselves on this album, but they’ve set a new bar for the underground scene they exist in.—Matt Crane

If I could only make one bold proclamation about music this year, it is this: LostAlone are the most underrated band in the world. Of all time. Ever. But their hope-filled new album Shapes Of Screams doesn’t need someone shouting its praises over a loudspeaker. It speaks for itself with one perfectly crafted, sonically overloaded song after another. (Plus the title of its 11th track, “Doooooooooomageddon,” could serve as a description if it.) As I described it in a previous playlist, the album “feels like a historical action film accompanied by a 700-piece orchestra.” LostAlone’s previous album, I’m A UFO In This City was close to perfect, and somehow their follow-up improved upon it. SOS’ conviction and honesty—and LostAlone’s grand way of presenting it—are going to make this one tough to top as my best album of 2014.  —Cassie Whitt

You may not know of them yet, but you soon will, because Kublai Khan are changing the face of heavy music. The recent Artery Recordings signees’ LP, Balancing Survival And Happiness, dabbles in the bludgeoning ethos of hardcore and the beefy beat-down undertones of metalcore, forming a sound entirely unparalleled. From the vicious groove of “Dropping Plates” to the album’s pit-inciting closer “Box Beneath The Bed,” Kublai Khan are breaking down the seemingly ever-growing walls that divide the heavy music scenes. Balancing Survival And Happiness conveys a story of pain, struggle and disdain, but perhaps most importantly, hope. Hope to learn from yesterday (in more ways than one) in order to create a better tomorrow. —Tyler Sharp

Modern Baseball – You're Gonna Miss It All (RUN FOR COVER)

This time last year, Modern Baseball were a little-known band with a well-received debut and a small blurb in our 100 Bands You Need To Know In 2013 issue. Fast forward a year—when phrases like “emo revival” and “pop-punk resurgence” are being thrown around daily—and the Philadelphia group are getting the attention they deserve, thanks to their standout sophomore album, You're Gonna Miss It All. Like their debut album, Sports, YGMIA addresses the moments—some awkward, some great, some heartbreaking—that come with, well, growing up. Whether it's a critical review of their own failings (“Broken Cash Machine”), an endearing number about the rush of a new crush (“Rock Bottom”) or a no-fucks-left-to-give view of their future (“Fine, Great”), you never get the feeling that these songs are anything but honest, heartfelt (and often self-deprecating) looks at what goes on inside the lives and minds of the people who created them. “I'll admit I'm in the same boat/Caught between my adolescent safety net and where the world wants me to be,” frontman Brendan Lukens sings in “Going To Bed Now.” Call Modern Baseball whatever you want—emo revivial, new wave of pop-punk—just make sure you're listening to them. —Brittany Moseley

The stitching together of seemingly disparate cross-genre elements into a lumbering Dr. Frankenstein's (musical) monster may be commonplace, but what Tombs achieves on album three must be some sort of new level of order from chaos. Where most bands who merge styles tend to sound like an iPod stuck on shuffle, these Brooklyn noise-smiths swallow sludgy doom, vicious post-hardcore, subterranean-dwelling American black metal and haunting, esoteric astral projections to spew forth a sonic stew in a class of its own. Who knew the dude from Anodyne would craft something as mind-expanding as Savage Gold? (I sorta knew.) —Ryan J. Downey

The fourth album by the Young Widows continues to loom large in terms of conveying feelings of menace, dread and punishment that makes most genres deemed “intense” seem hopelessly fluffy. (The Widows’ membership includes former associates of tangled, post-hardcore hopefuls Breather Resist.). There’s an implied urgency to the disc, but due to the lack of any accelerated tempos and the presence of massive doses of reverb, it feels like a trudging apocalypse, similar to watching a slow-motion film of a violent event—you don’t know what is going to happen, but you’re nauseous over the inevitable. Vocalist Evan Patterson isn’t buried in the mix as much as he’s somewhere couched inside it, like a guy fervently cleaning guns on his kitchen table talking to himself in front of a wall filled with seemingly disconnected stories clipped from newspapers. And therein lies the majestic beauty of Easy Pain: It affirms your misery and asks—rather demands—you to embrace it. —Jason Pettigrew