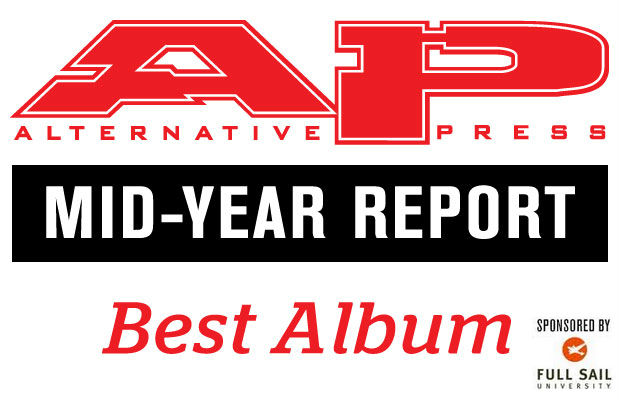 Another half-year has passed, so it’s time for AP’s annual mid-year report, where we break down the best of the best so far, with the cut-off date of June 30. Stay tuned for our reports on best videos and our most anticipated albums of the rest of the year.

Falling In Reverse's Just Like You was a true return to form for frontman Ronnie Radke and a rewarding experience for longtime fans. “I walk a fine line between coping and insanity,” Radke shouts on “Chemical Prison,” a post-hardcore number that would fit right in on 2006's Dying Is Your Latest Fashion. This album is such a throwback, he even continues Escape The Fate's “Guillotine” series, dubbing it “The Final Chapter.” Immersions into rap (“Wait And See”) and electro-pop (“My Hearts To Blame”) make this album the full Radke experience, fresher than ever. —Matt Crane

There’s something inexplicably more punk rock about structuring rock songs like hip-hop ones than writing the same three-chord track. Fall Out Boy dabble in the unexpected these days, climbing farther and farther away from their past and their contemporaries to become something extraordinary, but not altogether different. With this band, the goal was always emotional depth and unity—both of which are still there, they’re just infinitely easier to dance to these days. FOB make it evidently clear with every step of their musical journey that they’re going to make sharp turns, perhaps knocking off some rock purists along the way, but always leaving something for the faithful to hang on to. —Cassie Whitt

Hop Along's Painted Shut pulses with a tender urgency so many bands strive to convey, and never do. Guided by Frances Quinlan's joyous gravel, the Philadelphia quartet have forged a breakout album worthy of their talents with this sophomore release, their first on Saddle Creek. Their sound is a perfect addition to a label known for a certain brand of bleeding-heart confessionalism, detailing everything from domestic abuse to chance meetings with old enemies. But Hop Along mix their intimate admissions with punk edge and a freak-folk experimental streak. From the poignant trepidation of opener “The Knock” to closer “Sister Cities”'s rolling guitar jangle, Painted Shut is honest and fierce, a messy masterpiece helmed by a totally singular voice. —Lee McKinstry

With Peripheral Vision, Turnover have transitioned from pop-punk startups to dream-pop stalwarts. The album vents an essence of whimsical, free-flowing carelessness, but is anchored by frontman Austin Getz’s self-aware lyrics. “Adolescent dreams gave to adult screams/Paranoid that I won’t have all the things they say I need,” he croons in the hazy, ’80s-tinged “New Scream.” Peripheral Vision is layered with its endless, subtle-yet-infectious melodies and drowsy (at times dizzying) instrumentals that make you feel as though a late autumn breeze is coursing through your bones. With each release, Turnover have managed to progress into something entirely unique, and like a fine wine, they’re maturing into something truly special. —Tyler Sharp

I promised all the editors that once the follow-up to twenty one pilots' Vessel was officially in stores, I would stop over-saturating the office airspace with my pre-release download of Blurryface's forward-in-all-directions pop sensibility. Come the day of release, every single store in this damn city had sold out of their copies before noon. So I figured I would sacrifice the mental health of all the editors here by cranking it up one more time, thereby getting lost in laid-back charm (“Stressed Out”), yearning for my soulmate (“Tear In My Heart”) and wanting to smash up my office with mindless, directionless energy (“Lane Boy”), only end up feeling terrified of life (“Goner”). More so than any other record I've listened to this year,Blurryface upholds the age-old construct that art imitates life. And that art can be joyous, depressing and/or abjectly terrifying. —Jason Pettigrew

Enslaved wear the crown for “most interesting” survivors of the whole church-burning Norwegian black-metal scene of the early ’90s, earning their stripes with monstrous demos and splits with fellow countrymen (Emperor, Satyricon) before embarking on their own psychedelic, postmodern, reverb-drenched head trips that blend shoegaze, black metal, traditional metal, and psych-rock without ever sounding confused or all over the place. Each record offers a journey as epic as the Viking imagery that’s accompanied Enslaved, years before Marvel successfully got a decent Thor movie off the ground. Will Jon Snow return to Game Of Thrones? Don't care, when we’ve got Grutle Kjellson and Ivar Bjørnson making records as killer as In Times on the regular. —Ryan J. Downey