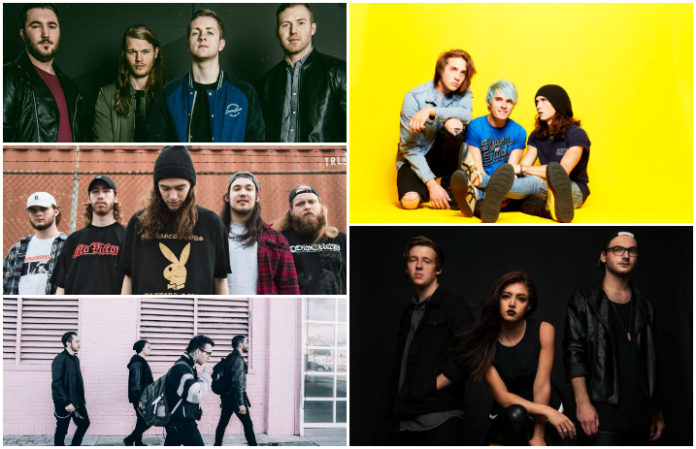 Do you have any idea how many records are released in any given year? That’s okay, neither do we. We do know that there are thousands of records that come out every year, from manufactured pop stars to local church choirs, and all of them are hoping to get your attention. See, a first release is a big deal, and we wanted to shed light on some of the best of the year. So through all the noise, here’s what stood out. Check out our favorite debut albums from 2016, brought to you in partnership with our friends at Full Sail University.

Releasing their debut album in April, Abandoned By Bears created a summer soundtrack perfect for playing in a car packed with friends on the way to a festival. Whether it’s Jacob Devinder slaying it on guitar or Max Fahlman laying down a nasty drum track, every song is guaranteed to have your head banging to the music and your body yearning to mosh. Coming out of Sweden, the only thing you’re going to be upset about upon listening to this album is that you haven’t gotten to see them live yet. —Jordan Toney

Against The Current – In Our Bones (Fueled By Ramen)
CHOICE TRACK: “Young & Relentless”

Against The Current’s debut album, In Our Bones, bleeds everything a solid pop-rock record should: catchy anthems, vocal charm and a ready-to-dance-along beat. Their sugary sweet pop aesthetics blend perfectly with Chrissy Costanza’s powerful vocals, creating a solid selection of tracks meant to be blasted at full volume. With songs as fun and fierce as “Forget Me Now” alongside more emotionally driven, touching tracks like “Roses,” Against The Current have proven they deserve their ranks in the pop-rock world, and we can’t wait to see what their game-changing next step will be. —Maggie Dickman

After a handful of releases secured them a signing to Pure Noise Records, Blackpool, England’s Boston Manor unveiled Be Nothing. in September of this year. Pristine instrumentation set the stage for uncompromising vocals that consistently prove themselves next to the tracks’ contemplative and thoughtful lyrics. An overall impressive genre-bending debut, Be Nothing. overflows with levels of depth that go beyond pop punk, stepping into guitar-driven rock and an overall Brand New-styled emo vibe.—Caitlyn Ralph

The next wave of nü metal has officially arrived with Cane Hill’s debut album Smile off. From “MGGDA” to “Strange Candy,” Cane Hill demonstrate just how disturbed, angry and experimental they can get. With each track, they take an axe to what is considered socially acceptable, from sexuality to religion to standard conceptions of beauty. These deranged heretics have everything from dreamlike electronic beats to metalcore in their musical arsenal—and we love them for it. This record challenges the psyche at every turn and it’s absolutely hypnotizing. —Taylor Markarian

I Prevail – Lifelines (Fearless Records)
CHOICE TRACK: “Come And Get It”

Popcore, a rather cutesy name for the epic combination of pop punk and hardcore, has always been a difficult genre to fully nail down. However, I Prevail’s  debut full-length Lifelines proved that there was a broader spectrum for the genre. From the upbeat, positively catchy af track “One More Time” to the borderline beatdown attitude of “Come And Get It,” and the inclusion of  acoustic ballads (“My Heart I Surrender”) to the mix, Lifelines bridges the gap between pop choruses and heavy breakdowns to deliver one of the most cohesive rock records of the year. Showcasing a rather diverse range and a refusal to be pigeonholed to one genre, I Prevail are reviving popcore as we know it. —Natasha Van Duser

Hailing from Oldham County, Kentucky, Knocked Loose may be one of the most unlikely success stories of the year. On their debut full-length Laugh Tracks, they blended a forceful voice with intricate melodies and a punishing down-tempo pace. Seriously, you could be staring the future of hardcore right in the face. From the aggression on “Counting Worms,” to the force of “Oblivions Peak,” each song blends frustration and excitement in a mighty way. With a solid touring stint with a variety of bands, Knocked Loose have made their way around the country, ( even the world) delivering their brand of in-your-face music that doesn’t just sit on the sidelines. Pure Noise made no mistake signing these guys, knowing well  the band would light up the scene. As they put it themselves, “no handouts, no thanks.” An album as crushing as Laugh Tracks indicates that Knocked Loose aren’t playing around, challenging the planet’s heavy music community to embrace the likes of Oldham County. —Nikhail Gogia

U.K. pop punks ROAM found a way to blend the best elements of pop punk into a debut album that holds its own alongside the genre leaders, including British counterparts Neck Deep and Canadian powerhouses Seaway. Backbone delivers irresistibly gruff vocals, riffy guitars and thundering rhythms, with tracks like “Head Rush” booming with serious pop-punk finesse alongside songs like “Tracks” proving that they can slow it down for an acoustic track just like the best of them, ROAM have solidified their place in a seemingly oversaturated genre. With a strong debut under their belt, we’re stoked to see what they’ll be throwing at us next. —Maggie Dickman

Formerly Emily’s Army, SWMRS formed in late 2015, subsequently releasing a debut—Drive North—under that new moniker in early 2016. SWMRS are summer-infused California punk, like drinking a cold glass of refreshing teenage angst on a warm July day. However, SWMRS stood out from the Los Angeles crowd, exploring everything from Miley Cyrus to young adult confusion, the Oakland surf punks crafted a unique debut that earned them a place on Fueled By Ramen’s roster by the end of 2016. —Caitlyn Ralph

Trash Boat – Nothing I Write You Can Change What You've Been Through (Hopeless Records)
CHOICE TRACK: “How Selfish I Seem”

British rockers Trash Boat are here to bring some grit to pop punk. Their debut album, Nothing I Write You Can Change What You’ve Been Through—produced by Wonder Years frontman Dan “Soupy” Campbell—offers a seamless blend of pop punk and hardcore with weighty lyrics that reflect on feelings of loss and loneliness. At its core, Nothing I Write is what most music fans crave: a raw and authentic portrayal of the world around them. —Rabab Al-Sharif

After years of the grind selling CDs to venue lines and creating every scrap of music they possibly could, Waterparks have finally come out on the other side—and they’re all the better for it. In this first full-length for Equal Vision, the ‘parks boys from Texas blur genre lines and dip into electronica, rock and pop punk, all while spitting lyrics that would make 2007 proud. If this album is any indication, Waterparks are here to stay—and make you cackle-laugh while doing so. —Mackenzie Hall

In today’s single-and-playlist culture, it’s harder and harder to find an album that’s “solid,” that is, a collection of tracks that can all stand on their own, without a weak link in sight. That being said, With Confidence’s Better Weather is solid—like, super-fucking solid. From the ripping opener “Voldemort” to the crushing “Waterfall,” this record is meant to be played loud, proud and on repeat. Pop punk is happily taking over the world (again), and WithCon are leading the charge with intense lyricism, earworm hooks and plenty of onstage butt jokes. —Mackenzie Hall