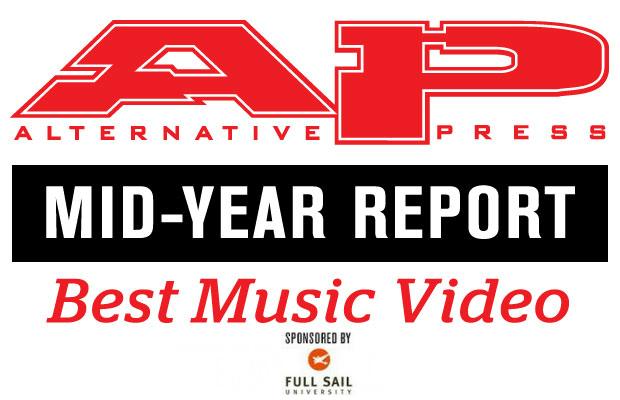 Another half-year has passed, so it’s time for AP’s annual mid-year report, where we break down the best of the best so far, with the cut-off date of June 30. Stay tuned for our reports on our most anticipated albums of the rest of the year.

The first video heralding the Detroit hardcore band's new album is a one-camera shot that's short on production values and waaay long on bringing the fear. We can be philosophical and analytical about the video's subtext, citing all sorts of concepts regarding the cleansing properties of fire, the brutal destruction of culture (vinyl records being a huge talisman in the hardcore scene) and the hatred of humanity so deep, it calls for the eradication of basic needs (Dude, they're burning a house…). Thing is, the fluid reality of the clip is whatever the viewer takes from it, whether he/she is trapped by material possessions or frustrated that a piece of music can't destroy an edifice. I'm hoping the Armed's next video will have them setting up and playing in a building being demolished in real time, with the band narrowly escaping a bulldozer shovel coming through the front window or a wrecking ball collapsing the side of the structure. Hell, who else is going to return meaning to the word “extreme”? —Jason Pettigrew

These new Pure Noise signees came out of nowhere with “Light The Night,” a thunderous, uplifting youth anthem worthy of top 40 radio. “We are feeling so alive,” the band shout over thumping percussion. “The young and brave will never die!” Balloons, glow sticks, confetti, Christmas lights and tons of mirrors make this video a stunning visual spectacle. Every color, shimmer and flash tracks the song’s emotional vibe; the dancing and raw energy Jule Vera bring make each shot electric. Creativity is king—this band probably had a tiny budget, and the video looks better than anything else that came out this year. —Matt Crane

SLEATER-KINNEY – “No Cities To Love”

Sleater-Kinney didn’t need a bunch of celebrity friends and fans to make me interested in the title track from their first studio album together in a decade, but the inventive concept for “No Cities To Love” is ridiculously fun, anyway. Watch (and listen!) for a bunch sweet peeps including Ellen Page, Evan Rachel Wood, Gerard Way, Sarah Silverman, Vanessa Bayer (Saturday Night Live), Natasha Lyonne (Orange Is The New Black), Norman Reedus (The Walking Dead), all of the members of the band (duh) and Carrie Brownstein’s Portlandia partner-in-crime, Fred Armisen (double duh). —Ryan J. Downey

Taylor Swift’s critically acclaimed video for her venomous “Bad Blood” transcends the known boundaries of genuine awesomeness. Featuring a star-studded cast of Jessica Alba, Ellie Goulding, Paramore’s Hayley Williams and various other notables, the intricate clip pits two superhuman entertainers against each other, which then climaxes with the commencement of a Herculean-like battle. Throw as much shade as you want: T-Swift is on top and she knows exactly what she’s doing. —Tyler Sharp

This video plays on the classic nightmare scenario that something is chasing you while you’re running with every ounce of exertion you have, but are barely moving. It just reverses the concept. In desperation to save his friend, the Wonder Years vocalist Dan “Soupy” Campbell carries the full-grown man and runs in agonizing slow motion toward something that will break your heart when it’s revealed at the end. Suburban onlookers witness the struggle but ultimately leave Campbell helpless. This video crushes, then stomps all over your feelings. For emotional impact, “Cardinals” is undoubtedly the strongest of the year. By the way: There is some debate online whether the person Soupy is holding in the video is drummer Mike Kennedy. Alas, we have confirmed, it is not. (The other members of the band do make cameos, however.) —Cassie Whitt

FIDLAR's “40 Oz. On Repeat” is what happens when a group of slop punk rockers try to make a crib sheet of their favorite 90's videos—with a bunch of materials that look like they were dug out of their parents' basements. That's a compliment, because the DIY ethos of this nostalgic clip bleeds messy charm, just like the ode to self-doubt this video accompanies. The L.A. skate punks don schoolgirl uniforms for a Britney homage,  create a hole-punched version of the “Freak On A Leash” video, call in the dogs for a take on Weezer's “Undone,” paint their own cloudy-background to remember Soundgarden's “Black Hole Sun” and frost their tips to channel Sugar Ray. Green Day, Beastie Boys, Devo, Eminem and Suicidal Tendencies also get shout-outs. FIDLAR play it all from a cardboard jukebox, and succeed in capturing platinum fun. —Lee McKinstry