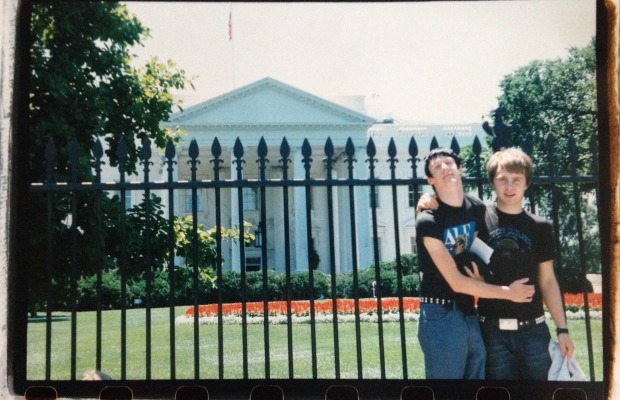 Over the course of 10 years, five albums and unfathomable odometer abuse, the Blood Brothers brought a much-needed vibrancy to America’s punk, hardcore and indie-rock scenes. Vocalists Jordan Blilie and Johnny Whitney were shrieking jet turbines in human form, ably powered by guitarist Cody Votolato, bassist/synth op Morgan Henderson and drummer Mark Gajadhar. The Bloods trafficked in speed, velocity, acceleration, atmosphere and a ton of other directions before quietly adjourning in 2007. So when the promoters behind the Los Angeles-based FYF Fest announced this past spring the band would be reforming, it was a reunion we could back unconditionally. The Bloods were already 10 years ahead of their colleagues during their original tenure, so it makes sense that America is ready for them now.

We approached the band for an interview regarding the machinations behind their reconvening. Truth be told, they weren’t into doing a traditional interview. Instead, Blilie and Whitney offered AP a list of 10 records that went far in not only fomenting their individual aesthetics, but helped determine the trajectory of the Bloods’ significant musical accomplishments. So while you’re getting pumped for one of their three reunion shows (Aug. 22 at Seattle’s Showbox and Austin’s Fun Fun Fun fest; FYF sold out last month), check out some of the sides that significantly influenced them. Remember, it’s always new if you never heard it before.

​Photo: Blilie and Whitney in front of some McMansion, 2000

JORDAN BLILIE: Cody had this warped old VHS comp of all these great bands—Slant 6, The Make-Up, Shotmaker, Angel Hair, tons more—and I remember always wanting to fast-forward to the Angel Hair footage. I was just totally enthralled with them. Gravity Records put out so many great releases, but I think this Angel Hair 7-inch is my all-time favorite. I still love everything about it: the silk-screened punk and insect cover, the balance they struck between total discordant stop/start abandon and earworm hooks, and Sonny Kay’s lyrics, which were cryptic, stream of consciousness abstractions full of brilliant (and at times hilarious) wordplay. They fried my teen brain right out.

BLILIE: This 7-inch essentially gave us the template for starting our own band. It was simple: We loved Area 51, they had two singers—Andrea Zollo and Spencer Moody, later of Pretty Girls Make Graves and Murder City Devils, respectively—so we started a band with two singers. Andrea and Spencer’s voices played so well off of each other, yet there were times when it sounded like they weren’t even listening to what the other was doing, an approach Johnny and I pretty much adopted wholesale for all our early releases. The very first thing they sang on this single encapsulated exactly how I felt skulking the halls of our suburban high school: “Talk, talk, talk, talk every day, but I don’t give a fuck about what you say.”

JOHNNY WHITNEY: Behead The Prophet shows were a glorious, searingly loud mess. Bursts of spazz degenerating into nonsensical noise with the occasional and extremely cathartic yet still pretty fucked-up-sounding mosh break. The cherry on the top was that they always performed with a 60-plus-year-old violin player onstage in the midst of the insanity. They passed out lyric sheets at their shows (an idea we later appropriated, thank you very much) despite there being no feasible way for anyone to read or understand any lyrics in the midst of a sweaty pulsating mob. They don’t make bands this weird anymore, and that is a goddamn shame.

BLILIE: Botch were the first band I saw where the singer screamed into a microphone, and I don’t find it too hyperbolic to say it changed my whole life trajectory. They were my introduction to hardcore (I won’t split hairs with all the different subgenres), and if you’re going to be influenced by a hardcore band, you might as well pick the one that’s smarter and better than everyone else. I remember my dad barging into my room while I was listening to this 7-inch, demanding why the singer couldn’t just sing, following his plea with an impression that was thoroughly embarrassing. I played my mom, an elementary school music teacher, their cover of Carl Orff”s “O Fortuna” because she organized an annual Carl Orff seminar every summer. She was horrified.

WHITNEY: When I was around 14 and first tried singing in a band, I knew I wanted to write about “the issues.” What issues? Probably something about injustice? Mumia Abu Jamal or wait… I know… The My Lai massacre, that was a thing that happened once, right?  I knew I needed to be pissed off about something, but I had only recently stopped wearing jelly-stained sweatpants to school, so my worldview was rather small.  Enter Fresh Fruit For Rotting Vegetables. From the first chord of “Kill The Poor,” it was like a shock. “Chemical Warfare,” “California Uber Alles,” “Holiday In Cambodia”—each song was like a well-crafted, modular news article from a world I knew nothing about, delivered in a way that was serious but didn’t take itself too seriously. Punky and yet somehow psychedelic, with Jello Biafra squelching like some sort of meth-pocked cartoon character, this record was an inspiration to me in so many ways.

BLILIE: It’s insane to me that this record came out in 1991, because it still sounds so fresh and forward-thinking, 23 years later. I remember hearing it for the first time when I was 15, and it blew my mind wide open. Rick Froberg’s lyrics were equal parts perplexing and relatable, and his voice is one of my all-time favorites. It reminds me of a more jacked-up Tom Verlaine—a total raw gem. You can trace Cody’s guitar playing on all our early stuff back to Jehu and Swing Kids. When we were teens, Devin—our first guitar player and a great friend— wrote them to ask how they got such gnarly feedback, and Froberg actually sent a detailed, thoughtful reply. I remember staring at the postcard, fascinated that it was the same handwriting as all the album art. I was torn between including this one or Yank Crime, but I gave this one the slight edge simply for the CD art: nothing but a scrawled-out, “CDs really fucking blow.”

BLILIE: No, duh. We had a friend in high school named Casey Wescott (he later played in the Vogue with Johnny and Fleet Foxes with Morgan) who always wore the freshest gear. I remember him showing up one day in a Locust T-shirt, and I knew from the one-winged locust logo alone that they were my new favorite band. When he described their live show (it was a weeknight, so I couldn’t go), he sounded like he’d just come back from some kind of spiritual awakening. And as soon as I heard “Hairspray Suppository,” I wanted everything I ever did to sound exactly like that.

WHITNEY: In general, I shy from terms like “spazz-core” in 99 percent of all contexts other than the following: Swing Kids’ self-titled 7-inch invented spazz-core. This record took what Drive Like Jehu were doing, stripped it down, made it punkier and voilá: One out of every four hardcore bands in the mid- to late-‘90s broke up and started a new band that sounded a lot like Swing Kids.

WHITNEY: It’s almost unfathomable to think that we are in a post-Danse Macabre, post-Hot Fuss musical landscape. But in 1997, when Nervous Circuits came out, it was completely fucking unheard of for a punk/hardcore/indie band to use a synthesizer. Suffice it to say, Nervous Circuits is a bold masterpiece. Futuristic without sounding trite, this record influenced so many bands; it is a crime that today it is largely unknown. The lyrics are these concise yet nonsensical imagistic surrealist poetry modules, and I am not ashamed to say I borrowed heavily from the paradigm this record created throughout the Blood Brothers’ career.

DEATH WISH KIDS, There’s Nothing In School They Can’t Teach You On The Streets 7-inch (HOPSCOTCH, 1995)

WHITNEY: It might seem redundant to write about this record and the Area 51 record Jordan has referenced already, but doing so I think really emphasizes the profound role these two 7-inches had in the genesis of the Blood Brothers. Andrea’s screamy voice, the four-on-the-floor beats and punky, bratty short songs—just like the lyrics to the song “AA” read, “If you want something… Fucking steal it.” We fucking stole it. To our credit, we never really intended for the Blood Brothers to play more than a few shows, so the plagiarism was not ill-intended. But seriously, this record just sounds dangerous, dangerous in a way that doesn’t come off contrived. alt