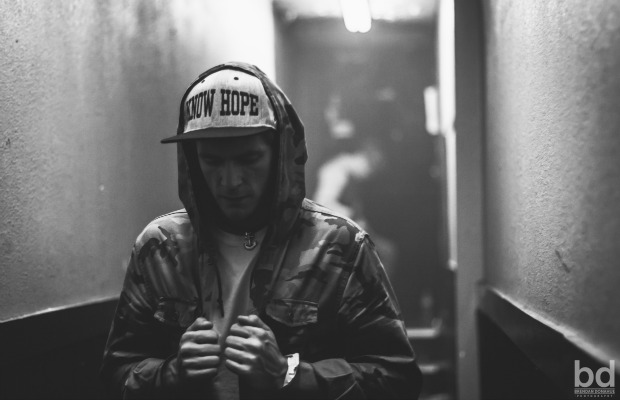 As many of you know, I’ve lived on the road the last five years as a full-time touring artist and vocalist for the Color Morale. I’ve spent most of that time with an ear to the ground watching trends come and go, while always trying to maintain authenticity in who I am and what I’m saying as an artist. In these trends that seem to shine and fade, I get to watch gimmicks appear that make bands huge just as quick as I get to see them fade away.

I recently read a blog post by Chris Motionless about insincere music culture, and I couldn’t agree more with most of the points he touched upon. There are money-making failsafe plans that seem to be growing increasingly within the music culture. I remember a few years ago everyone was putting “fuck” something on their merch and selling it generously. I even remember addressing that from stage, saying, “Sorry but not sorry we don’t have a shirt that says ‘fuck’ on it. We’re just here to do what we do.” I think I even pissed off I Set My Friends On Fire once because I didn’t realize they were selling a shirt with said context.

Now it seems that the word “hope” is also growing in popularity. I’ve seen both the authenticity and the poetic approach to lyrical delivery or message severely underplayed. Don’t get me wrong: There are plenty of artists out there using positivity as the fuel and passion for what they write about. Take, for example, one of my best friends, Joshua Moore of We Came As Romans. What you might not understand is people like Josh and I live this; it doesn’t “sell” anything for us because if this ended tomorrow we would be the same people.

We started in minivans and from nothing, saying what our lives made us say. With that being said, is it unavoidable that no matter what, our music culture will always be fueled by gimmick? I would love to say no, but I just don’t know the answer. I watched so many “Christian hardcore” bands come and go over the years, and in the process remember questioning if it was just becoming a trend. I would give anything to still be able to attend Cornerstone Festival, but it doesn’t even exist anymore.

My comfort is in this: I came up with the title Know Hope one night laying in bed with my eyes shut repeating over and over that I had “no hope” to carry myself forward anymore. I wanted to quit the band. I didn’t know who I was or what I believed in anymore. I struggled with mental illness and couldn’t bring myself to get help. It’s not easy to admit that as a grown man. Those two words were imprinted on the back of my eyelids as I looked forward to nothing at that point in my life, and in that moment I made a decision and titled not an album, but my life: Know hope. It was a resolution to me as to why I needed to carry on. I then wrote it into 12 songs, and in the short span of a year of releasing the album, I have had my shoulder cried on, I have had my life tattooed on those that connected, and I have found my purpose in moving forward with who I am. I’ve received hundreds of letters, and pieces of artwork expressing the authentic connection the listener has had with Know Hope. I strongly believe that music can and will inspire and motivate people to save their own lives.

There is still hope, and it’s in authentic music and artists that destroy themselves on the road 10 months out of the year to do nothing more than be themselves. I wrote this to challenge your thought process and ask you, are you feeling music with your eyes or are you feeling it with your heart? If you’re in the latter, I’ll see you at Warped Tour where we can sing together—not lyrics but life.