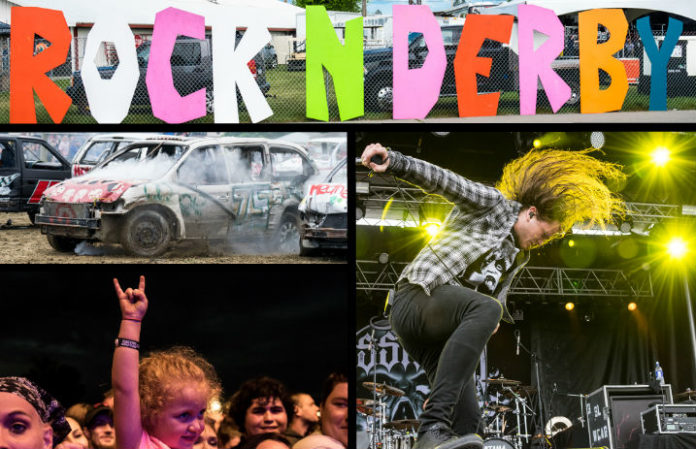 Three hours north of New York City, well beyond cow farms and past the capital of Albany, is a middle-of-nowhere village called Schaghticoke. I’ll be honest, I still don’t know how to pronounce the name and neither did any of the other concertgoers who made the long pilgrimage from other far away areas. So my little group affectionately referred to it as “Shit-out-of-coke” because that seemed the easiest way to identify where we were. Because let me tell you, that in itself was a difficult and disorienting task.

What brought us there was the inaugural year of the Rock’n Derby festival, which features three days of metal, rock and hardcore bands, not to mention food and clothing vendors, wrestling and a demolition derby. How the idea came about to throw all of these things together is beyond me. If I were to take a stab at some kind of meaningful rationale, I’d say something about the destructive spirit of rock ’n’ roll finding its way into other forms of entertainment, but I think that’s a stretch. The most accurate explanation is probably just that demolition derbies and wrestling are two favorite redneck pastimes.

That’s not offensive, by the way. Everyone there totally owned the fact that they were rednecks. One of the wrestlers dubbed himself “Redneck” and the word was proudly spray painted onto several of the derby cars. These people fully embraced the stereotype and were completely aware that this whole scene was an excellent display of redneck culture.

WRESTLING AND DEMO DERBY: MEN AS UNICORNS AND CARS ON FIRE

Wrestling has its own weird, almost mystic subculture that I still have trouble wrapping my mind around. There is an established code to suspend all disbelief even when the acting lacks all believability. There’s a complete willingness to accept and celebrate the ridiculous. I mean, when a wrestler comes out in black spandex with purple and pink tassels and matching face paint that makes him look like an upright unicorn, “ridiculous” is pretty much the only word to describe it. And again, those who avidly watch wrestling are fully aware of this. But the crazy outfits and the sub-par soap-esque skits only enhance the power of the spectacle.

For the record, I’ve been (albeit against my will) to an actual WWE Raw event before at the Staples Center in Los Angeles. WWE and this small-town display are both equally ridiculous, but at least the WWE crew’s blows and surrenders are somewhat believable. The Rock’n Derby’s wrestling lacked all craftsmanship and sophistication of a plot (not that there was much attached to the “sport” to begin with), but at least I got to see dudes in skimpy outfits throw each other into the metal fence that was supposed to contain the action.

I’d at least had some reference point for wrestling. The demolition derby, however, was totally uncharted territory. I didn’t even really know what it was, so I asked one of the gentlemen who was coordinating the event.

As he explained it, about a dozen or so vehicles crash into each other over and over again and the last car left standing wins. You can’t hide for more than 20 seconds or you’re disqualified, and the top three winners each receive some sort of cash prize ranging from hundreds to thousands of dollars and trophies, the biggest of which my new friend told me was taller than my 5-foot-5 frame.

Looking at the junk, scrap metal cars I asked him, “So, how do they not get hurt?”

“Well, there’s no glass and they’re strapped in,” he said, “and they’re wearing fire suits. But other than that I imagine they do get hurt sometimes.” Needless to say, even amongst the crowd there were plenty of missing teeth.

The derby announcer proclaimed this to be the 53rd season of demo derby since its inception in 1963. The dented cars and vans paraded around the track “kinda purty-like” (his words, not mine) decorated in everything from purple splotches for the late Prince to Anthrax and Halestorm band logos. Once the countdown was made, the cars whipped around the dirt arena and began kicking dirt pellets up into the crowd and at yours truly; it was extreme bumper cars. Full tires got taken off, metal smashed into metal and one car caught fire giving the driver about five seconds to flee from the car before the firemen on standby came and prevented a full on explosion.

Given that this was the very first Rock’n Derby, there was bound to be some confusion. At first my photographer and I had trouble getting past security. In order to proceed with the day’s interviews (We Came As Romans, For Today and Miss May I) as planned, Adrenaline PR publicist and festival coordinator Arielle Rosselli had to come rescue us in a golf cart and bring us back to the press barn.

Yes, barn. Every structure on the fairgrounds was a paint-chipped, hay and shit-covered barn. It really helped sell the rural ambiance and I loved it (though the large, rusted farming equipment and the dilapidated petting zoo signs made it a little creepy—like the setting of a Rob Zombie flick). When conducting our interviews, I went out of my way to go behind the stables and sit For Today’s vocalist Mattie Montgomery  in a tiny uncomfortable wooden chair and make Miss May I’s Levi Benton and APMA-nominated Ryan Neff wade in hay bales. One of the other “journalists” in the press barn, however, decided to scoop up the animal feces because it was ruining her shot. I put that word in quotes for two reasons. First, she was taking part of the story out of her story. Second, I don’t think you qualify as a journalist if you have reservations about stepping in shit.

At the end of the day, regardless of the whacky surroundings, everyone was there for the music. After Stray From The Path, For Today and Beartooth packed the indoor stage (there were two other outdoor stages) and revved up the crowd with songs old and new. For Today always shakes the earth with their heavy sound and Mattie’s bellowing vocals. WCAR’s Dave Stephens and Kyle Pavone crashed the ending of “Body Bag” during TOOF’s set, which sent fans into an uproar before they sprinted off to go catch A Day To Remember at the outdoor Derby Stage.

Confetti cannons and beach balls erupted during the first song, “Downfall Of Us All,” but it was when ADTR played their classic track “Monument” that it all started to hit home. When Jeremy McKinnon sang “Miles away/and I wish this didn’t mean so much to me,” it was real, not just for all the bands but for the fans and the press who traveled hundreds of miles to be there. It’s true, sometimes it’s a hard life to commit to. Your feet hurt, your gas tank’s empty and probably so is your wallet, but the music makes it worth it. Maybe none of it made sense, but as they say in “Right Back At It Again,” you play a show until it begins to.