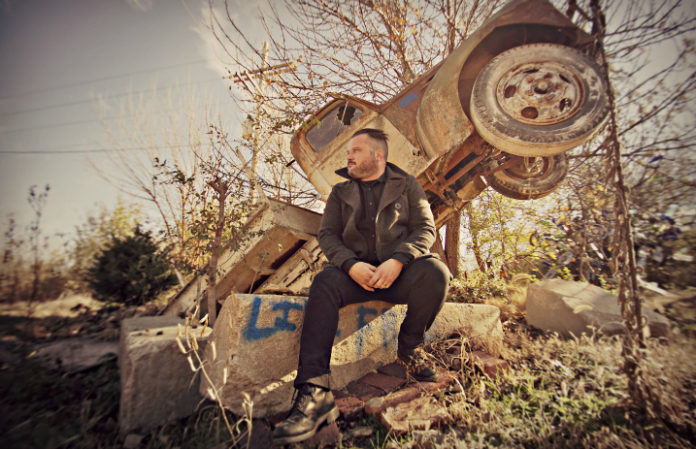 In Matt Pryor’s latest solo release, Memento Mori, “Mary” stands out for a multitude of reasons. One of the biggest, though, is that it’s the only fictional song on a very personal album. On Memento, Pryor remembers real people in his life who’ve passed away. Mary, however, is not among those people. Paging the Supernatural fandom: This is inspired by Mary Winchester, the dead-then-resurrected mother of protagonists Sam and Dean.

As for its somehow simultaneously sweet and eerie video? Pryor chooses to leave that open to interpretation—mostly because even he doesn’t know what’s happening here. Give it a look and tell us what you think.

What did you have in mind for this video?
I was like, “Why don’t we do something that’s animated, because then I don’t have to be in it,” which is my favorite kind of video to make. Equal Vision got me a couple different options, and I liked this guy’s stuff. I’m not a filmmaker. I can only write the song, and then it’s up to them to interpret it. I think it turned out cool. It’s not the happiest video I’ve ever made in my life.

What are those things in the video?
Fuck if I know! [Laughs.] They’re kind of creepy and sweet at the same time. Just like me.

The album is about loss and remembering people who’ve died. Is “Mary” about someone you knew?
Actually, that’s the only song on the record that’s fictional. It’s a song that I’d had laying around that was originally written from the perspective of a guy being executed, which is not what it’s about now. I always liked the song, but I only had the first line, “Mary, I’m sorry.” I was working on this record, and I had this song, but I didn’t know what to write it about. And my whole family knew the album was about people in our lives who’d passed away. My daughter, who is almost 15, is a really big fan of that show Supernatural. She goes, “You should write it about Mary Winchester,” who is [the main characters Sam and Dean’s] mom who got killed by a demon. I was like, “Alright!” It’s really vague. [Laughs.] It’s not like, “You were taken from me by a yellow-eyed demon, and after 12 seasons, my sons are still trying to hunt you down.” But, yeah. My daughter Lily was like, “Well, she died!” I was like, “Fair enough. I don’t have anyone else named Mary, so…” And that’s been a common thing I’ve had in songs over the years. I don’t really know anyone named Amy; I don’t know anyone named Hannah… “Mary” is just kind of written from someone feeling loss and having the feeling of, “I’ll never be happy again until you come back,” but they can’t come back. Because they’re dead.

Having written from that abstract standpoint and having given the animators control over the video, how did you feel when you saw their vision for the song?
I liked it. More importantly, I showed it to my wife and kids and they really liked it. I’ve kind of gotten to a point where I’ve realized what I’m good at, and making videos is not one of them. In the same way that I would hire a good drummer to come in and play on the record, I write the songs and the words and I sing them, and hopefully everything else gets subbed out to the experts.

Is there anything else people should know about this song or the album?
It’s very personal. Except for “Mary.” [Laughs.] So far, it’s been difficult to figure out how to work these songs into my live set because some of them are real bummers. It’s kind of like no one wants to pay a cover charge to go out drinking on a Friday night just to be bummed out. [Laughs.] You’ve gotta find that balance! I’m really proud of the record. It’s not like anything I’ve ever done before. I’ve never done anything that’s just specifically about death. I always say it’s a good record to listen to if it’s raining outside and you want to read a book. ALT

You can catch Pryor on tour with Dan Andriano and Lily Pryor in the U.S. through May 20. 'Memento Mori' is available now via Equal Vision Records.