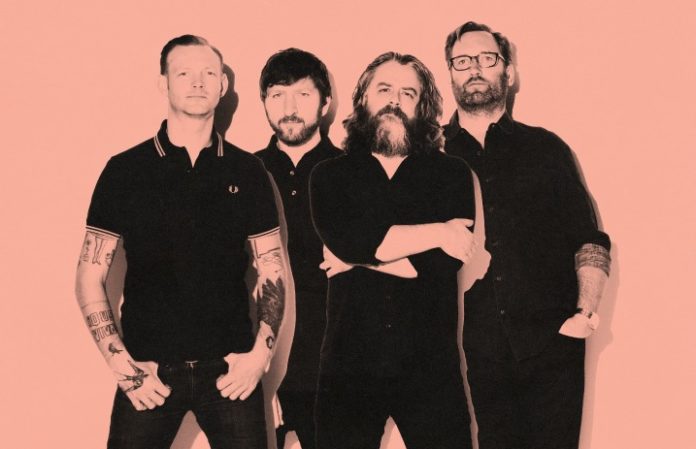 There’s plenty for the members of Minus The Bear to look forward to this year. VOIDS, the Seattle prog-punk group’s first new album in five years, is one of the most powerful expressions of the melodicism, grit and heartfelt expressionism they’ve ever made. The band are also set to kick off a North American tour March 10 in Boise, Idaho, that will take them to this year’s SXSW festival in Austin, Texas, among other spots before ending with a hometown show on April 15.

Exciting as it all is, for vocalist/guitarist Jake Snider, everything they do is stained with all the horrible decisions and even worse rhetoric coming from the current resident of the White House. Already politically involved and aware, the 40-year-old musician has been particularly fired up as a result of the 2016 election, using his personal Twitter account to, as he puts it, “put a mirror to” the hypocrisy and vanity of the president. And if he ruffles anyone’s feathers along the way? “The haters can just not come to the shows. Fuck ’em.” Snider spoke with AP during a break from tour rehearsals to talk about the political fire in his belly and the fallout from Trump’s ascendance from real estate magnate to leader of the free world.

It would be 3 million fewer people than a rally of WE HATE FACISM voters. Go fuck yourself. https://t.co/vWe3j0gpMz

Following your personal Twitter feed has been really interesting, seeing you retweeting and commenting on what’s going on in the political realm lately. Has this always been an interest of yours, or were you inspired to take up the torch during the 2016 election?
It’s always been interesting to me, ever since I was a little kid growing up in the Reagan era. Politics is how we deal with our daily lives and interact with each other as a society, and the application of that to everyone, the whole collective of the country. There’s a lot of people to govern in this country and having a fucking moron be the president that about 20 percent of the population voted for, doesn’t cover the diversity and level of thought and discourse that this country is capable of. He’s a fool. So it’s not really important to me to engage with Donald Trump as somebody who’s saying reasonable things. It’s more important for me to kick him in the nuts where his ego lies: in his appearance and his shallowness.

If you’re anything like me, it’s been exhausting keeping up with everything going on since the election. How has that been for you? Is the passion still there, or does it get dulled in some way, considering how much bullshit has been pouring out of Washington?
No! I think that the idea that people are going to get exhausted by this is underestimating how much the American people can consume of this stuff. It’s a show. Politics is usually entertaining on some level for a lot of people, and now it’s turned into a friggin’ circus. People aren’t going to be burned out by this. They’re going to see their neighbors taken away by ICE and they’re going to see their jobs evaporate once the market crashes and interest rates go up—all these things that are almost impossible to cover in an interview with a music magazine. I wrote an article for you about why Mitt Romney was a horrible choice for president five years ago. I can’t even believe how ridiculous and how far the Right has pushed itself into nihilistic fascism. The people that have been like, “Obama’s stepping on my rights and is going to take my guns!” are completely fine with government overreach as long as it’s a wealthy white male. And it’s going to save their wimpy little butts from the very low-risk fear of some terrorist attack. The Republicans and Republican Party have a difficult time assessing risk. They’ll go eat 20 cheeseburgers a week and drink swill all day long, smoke cigarettes or whatever they do…and they’re afraid of terrorists. They have no idea what to actually be afraid of.

Does it make sense to you on some level how Trump got elected, knowing how he stirred up those people living in “Middle America” who feel like they were neglected by the Obama administration and the Democrats?
Sure, that’s a consideration in some way. One thing to keep in mind, though, is that the polling that predicted Clinton would win got the numbers pretty much right, in terms of voting. In terms of how many people were going to vote and who they were going to vote for. She lost in four states in the Electoral College by about 1 percent, which is totally within the margin of error of the polling that we had available at the time. Should we have listened to the people that used to build typewriters and artificially inflated the typewriter industry with the government? A lot of these jobs in the coal industry and in manufacturing are being automated away or are just not financially reasonable. Also, the numbers in the election show that it wasn’t some big rebuke of the Democratic Party as much as people like to think. People showed up and voted. It was a pretty darn good turnout. She got a hell of a lot more votes than Trump’s 3 million and even the votes within those states that actually ended up twisting the Electoral College to Trump. It was such a close margin. It could have been that people were overconfident in her because of the polling and enough stayed home to just let it happen. The combination of that and Stein voters and all the people fucking around writing people in. Sure, people in the Midwest are pissed off, but they’re Republicans. Aren’t they supposed to be like, “Get a job, you lazy liberals!” Isn’t that what they say to us? So, get a job. Figure something else out. It’s not our job to keep pampering industries that are failing.

Considering the swell of protests and marches that we’ve been seeing, have you been able to get out and participate in some of those?
No, I haven’t. I don’t live in the big city anymore. I’ve moved to a smaller part of smaller-town Washington. With the kids, it’s pretty darn difficult to get out and protest. I’ve got somewhat of an audience to speak to through music, and that’s how music spoke to me as a kid and got me involved in music and politics. Trying to figure out what the reality of the relationship between government and the people is. And that’s pretty broad, but that’s what politics is

Since you’re discussing all of this on your personal Twitter account instead of the Minus The Bear one, are you getting any sense from fans that they’re happy to hear you be so engaged, or would they rather you just talk about what’s going on with the band?

Thank you for this gift. https://t.co/4XnpoDCAFP

The overwhelming response to anything that we’ve done that’s been political has been positive. We donated all the profits a couple of weeks back from Bandcamp to the ACLU [American Civil Liberties Union]. We gave up our income for that day. Right when the election was about to happen, we did a sale on our website and 100 percent of the proceeds went to Planned Parenthood. People are pretty happy about that kind of stuff. And the haters can just not come to the shows. I could give a fuck. ALT

Minus The Bear’s ‘VOID’ is available now.