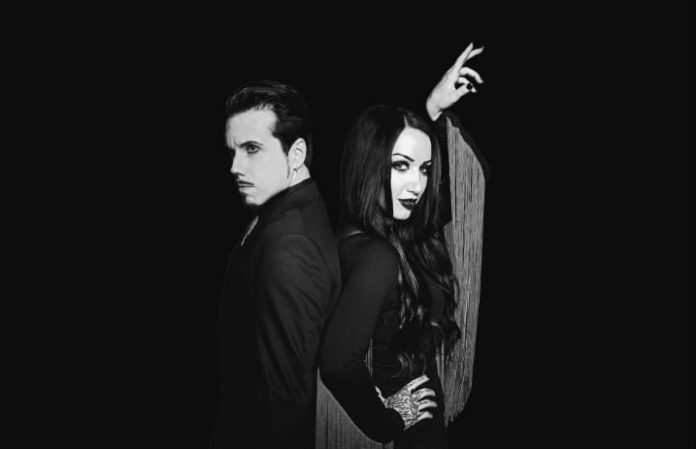 Earlier this year, APTV exclusively unveiled the new spooky collab between Rob Zombie bassist Matt “Piggy D” Montgomery and New Years Day’s Ash Costello. At the time, they had teased that the “witch wave” was nigh and to look out for their Halloween-themed tunes this year.

The band have certainly delivered with Three Hits From Hell, their debut EP, which you can listen to exclusively here. Consider it our Halloween gift to you! Boo! We spoke to mystic maven Ash Costello to see why the Haxans are bringing it back, bat-style.

Matt started the Haxans in 2012 and he released a couple singles. Why did you guys decide to bring it back now?
I think this was an idea he’s always had, but he couldn’t find the right partner. It just took him a while to find me, I think. We met on accident at an award show. We bumped into each other, we were introduced and it was like right away he said he felt like he knew that he was going to do some sort of project with me. And I kind of knew he was going to play a role in my life—I just didn’t know what it was yet. Something musically. Now, it feels like brother and sister.

The only song we haven't heard from Three Hits From Hell is “Little Black Goat.” Can you tell me a little bit about that song?
“Little Black Goat” is my favorite song currently. It’s the one I listen to in the car. It’s dancey, but it’s dancey in a way you wouldn’t expect it to be. You wouldn’t expect to go to some occult-ish Satanic ritual and have a dance party, but that’s kind of what the song gives you a vibe of. It shouldn’t be dancey, but it is. It feels all wrong, but it’s so right.

It’s so dark, because immediately you hear “goat,” and you think of the devil. Then, it kind of has this Mary-Had-A-Little-Lamb vibe where the goat is your little companion.
It’s this little goat that’s always walking beside me on a leash, but what it really is is me keeping my crazy at bay. Like, my dark side is always at bay on the leash, but if you fuck with me I’m gonna let it off this leash, basically. Which you get, just from listening to this song, that that was the idea behind it—the little black goat represents that.

Fans have been commenting on your “all black everything” look for the Haxans, where you aren’t displaying your usual red hair. Why did you decide to take that route and separate yourself aesthetically that way?
I wanted to separate the project from New Years Day, and I think what correlates myself to the music of New Years Day visually the most is my hair. I didn’t want it to be, “Oh, you left New Years Day for another band,” and I wanted to try and be a different person. The hair just seemed like the easiest and best way to do that. I wanted to do something fun for me, something that’s different from what I’m used to, and it’s fun to play dress-up, and maybe deep down, I long for all-black hair.

Are these three songs just a preview? Are you guys going to keep at it?
This is just a preview; we are finishing up a full-length album currently. We just wanted to share some fun songs for Halloween, because obviously Halloween is our favorite. We wanted to give something fun for everyone to dance along to at their Halloween parties. But there’s a full-length coming, and so far, I’m really enjoying the process. It’s really hard to get anything done with Matt, because we’re like two little kids in a candy shop—always. Like last night we ran around the front yard in 99-cent-store Halloween masks. Or in between recording we’ll end up putting a horror movie on and stop recording and just make commentary on the movie the whole two hours, then finally get to a song. The process of making the album’s slow, but only because I’ve never met someone that gets my horror obsession the same way he does and vice versa. Like, we both had the same issue of Fangoria magazine when we were younger. Like his first issue that he got was the same one I got. And we have all these weird things in common. Like dude, were we separated at birth?

So it just sounds like it’s a really natural, fun process.
It’s been really fun. The other day was a blast. We did this Halloween kids album that we’re gonna be releasing as an extra treat. And it’s just six tracks of one-minute songs that we made up about Halloween and scary stories and spooky sounds we made. And we did that the other day, we were rattling chains and pretending to be werewolves howling at the moon. That’s just kind of the weird shit we get into everyday. It’s always a party.