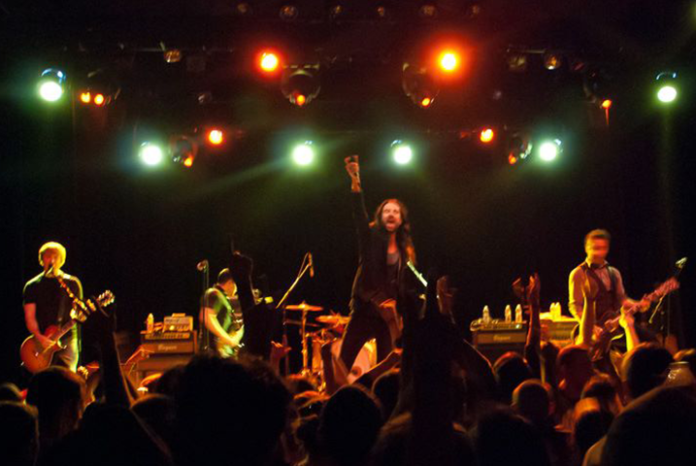 The Juliana Theory are teaming up with AP to premiere a long-lost B-side from their Deadbeat Sweetheartbeat sessions, titled “Slowly Flying Solo.” The track is one of four bonus songs that will be featured on the LP’s impending vinyl reissue.

Deadbeat Sweetheartbeat was released as the band’s final album in 2005. The effort, however, was absent from the vinyl reissues that accompanied their 2010 reunion shows. “From the perspective of a fan, Deadbeat Sweetheartbeat just never really got the same level of attention as other TJT releases,” says Mind Over Matter owner Austin Kihn.

“Maybe it was because it wasn’t pushed as hard at the time of its original release… it’s hard for me to say. However, there are some of the best TJT songs the group ever wrote on this album and we weren’t about to do a fly-by-night reissue and let it blend in with the rest of the vinyl discography of the band.”

The four additional tracks found on Deadbeat Sweetheartbeat’s forthcoming 10-year anniversary reissue were originally only included on the album’s limited DVD portion released in 2005. The 2xLP pressing, limited to 500 hand-numbered copies is set to be released August 19 via Mind Over Matter. (Pre-orders are on sale now.)

Features include a four-foot-long quad-gatefold, artwork the band originally intended to be featured on the release, a screen printed, hand-crafted slip cover, a printed lyric sheet and more. In total, the package is over half-an-inch thick and weighs over two pounds.

Below you can listen to an AP-exclusive stream of “Slowly Flying Solo.” Be sure to leave us a comment with your thoughts!