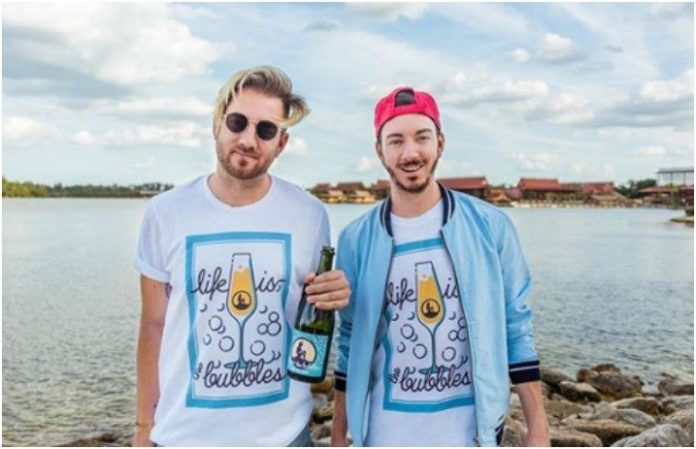 [Photo by: The Lost Bro.'s/Instagram]

Ditch the flower crowns for mouse ears, throw on a Tink-182 tee and “Drink Around The World Tour” fanny pack and enjoy a weekend of pixie dust instead of desert dust.

��Today was unbelievable!�� ����Seriously, thank you all so much for always being so supportive of everything that we do.���� ��As many of you know, the Ohana jerseys FLEW this morning, and sold out super quickly.�� ��We have good news!! We’re bringing them back next Monday, in addition to a separate sale that we’ll be running on other products.�� ��To help us order the correct sizes please head to the Ohana jerseys on our site and subscribe to the size you want. This will help us plan their restock!�� Again, thank you, thank you, thank you as always. ��: @ba.cob • • • • • #disney #disneygram #disneyside #parkbound #disneyparks #disneyland #disneyprincess #instadisney #wdwresort #disneymagic #mickeymouse #wdwbde #disneybound #featuremydisney #ilovedisney #waltdisneyworld #dressedindisney #disneylifestylers #magicalmakers #parkbound #mainstreetusa #mainstreet #disneyblogger #wdw #magickingdom #disneyig #disneyphoto

It’s not just a viral Twitter idea: A Disney-tinged Coachella-esque fest is a real thing happening April 28 in Orlando, Florida. The event formerly known as Kingdomchella is now The Kingdom Classic and will feature a weekend of “magic, music and merch” run by theme park and pop culture-inspired apparel and accessories brand Lost Bros Trading Co.

Much like the real Coachella Valley Music and Arts Festival, The Kingdom Classic will feature all of the main features and famous amenities (i.e. exclusive wristbands, photo ops, Insta-worthy food options, sponsored pop-up shops, DJ sets and live music) but Disneyfied, of course, and attendees won’t have to shell out thousands of dollars for tickets or traipse through dry, desert weather conditions. Instead, TKC festival-goers will be partying poolside and enjoying air-conditioned party rooms and dance floors at the upscale venue 3NINE inside the Rosen Plaza Hotel, just a few miles from the Walt Disney World Resort.

Lost Bros founder Cody Tapoler is familiar with the music scene and event production. At the age of 17 he started touring with local and regional acts in the scene and eventually landed a gig tour managing pop-rock act Before You Exit. He later went on to release a solo music project under Cody T and started Lost Bros Trading Co. as an online clothing store with his brother, Colton. The store has since evolved into a multi-platform lifestyle brand consisting of theme park and pop culture-inspired tees, accessories, music, blogs and YouTube videos. Most recently, the bros collaborated with Smash Mouth and released a Run The Jewels-inspired Black Panther tee. On the music side, The Lost Bros have dropped self-produced covers of Disney faves such as “Kiss The Girl,” “Under The Sea” and “Hawaiian Roller Coaster Ride” on Spotify and are gearing up for their next release, The Kingdom Classic EP.

“What started as a very simple EP release party, after a few brainstorming sessions, turned into a fully concepted and themed live event,” Tapoler explained. “We’re now in a real, huge and beautiful event space. We have 16 shops doing pop ups at this event. We have a full food and cocktail menu custom made for our event based off of all the restaurants we’ve made up. I’ll be playing our new EP of covers, The Kingdom Classics EP, front to back, and we have some awesome guest DJ sets from some of the people in our community.”

��The Kingdom Classic is less than two months away!�� ��Has everyone bought their tickets? If not, VIP tickets are only on sale until April 1st! Now is the time to grab yours (link in bio)!�� ��Feeling this mimosa variant of the Life is the Bubbles tee?! The only way to get one is to grab a VIP ticket to The Kingdom Classic and claim it on your way in to the event!�� ��One of our favorite things to do for these events is to design some new merch each time. Kind of like a little thank you from us.���� Who. Is. Excited?! ��: @ba.cob • • • • • #disney #disneygram #disneyside #parkbound #disneyparks #disneyland #disneyprincess #instadisney #wdwresort #disneymagic #mickeymouse #wdwbde #disneybound #featuremydisney #ilovedisney #waltdisneyworld #dressedindisney #disneylifestylers #magicalmakers #parkbound #mainstreetusa #mainstreet #disneyblogger #wdw #magickingdom #disneyig #disneyphoto

Teased merch from the event includes a “Life is the Bubbles” mimosa T-shirt (a classy and grown up way to show love to The Little Mermaid), collectible pins and free swag. Disney fans will not want to miss this event.

The Kingdom Classic is not associated with or sponsored by The Walt Disney Company or Coachella.