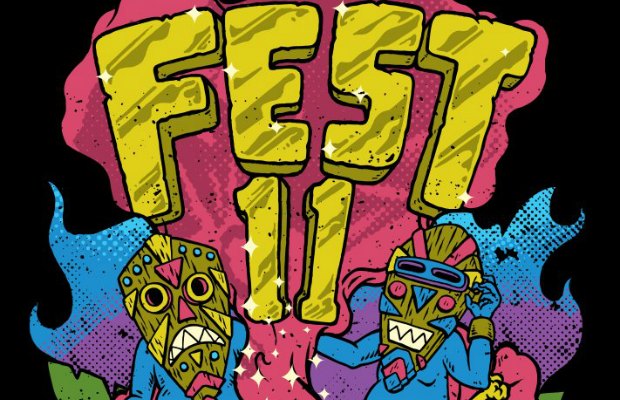 Now in its second decade as the premiere event for beards, booze and bro-downs, THE FEST wrapped its 11th year with a bang. AltPress.com was there at the Gainesville, Florida, event, and now here are our picks for the best moments during the weird, wild world of the Fest: the third annual Festies!

MOST STREAMED SET: FRANK TURNER
For the second year in a row, AP livestreamed performances from bands playing the Fest, including sets from Braid, Lemuria, Bomb The Music Industry! and more. A number of bands were neck-and-neck for the most-streamed set throughout the weekend until the very last set of Sunday night from English folk-punk troubadour Frank Turner. His solo performance garnered nearly three times the traffic of any other band whose set we broadcasted. We suspect there are many Brits calling in “sick” today from staying up all night on their computers. [SH]

BEST ONSTAGE NAME CHANGE: GRABASS CHARLESTONS
Gainesville punks Grabass Charlestons just put out their career-best album, Dale & The Careeners, but their less-than-professional band name probably causes a number of people to still avoid them. Hence, the band announced onstage Friday night that they were changing their name to the Careeners. The reason given? “My mom said we couldn't be the Grabass Charlestons anymore, we had to change our name. So we're the Careeners now,” said singer Will Thomas. Simple enough! [JS]

MOST RESPECTFUL MOMENT: THE SWELLERS
During the final song of the Swellers’ Friday night set, “The Best I Ever Had,” the band broke the song down and segued into a No Use For A Name track as a tribute to NUFAN frontman Tony Sly, who passed away unexpectedly. Even though NUFAN had never played the Fest, It was a touching moment and a classy move on the Swellers’ part. (Additionally, Young Turks dedicated their Saturday set to Sly as well, with their singer donning an old NUFAN cap.) [SH]

BEST DAREDEVIL STUNT: RIVERBOAT GAMBLERS
Mike Wiebe of the Riverboat Gamblers has always been known for his wild stage presence. But during his band's (woefully under-attended) Saturday set, the singer went next-level with his shenanigans, scaling the beer hut next to the stage, climbing on top of the speaker stack and then diving into the crowd. It looked utterly death-defying, which is fitting, as Wiebe asked the crowd prior to jumping, “If you guys let me not die, I would appreciate it.” [JS]

BIGGEST GOOSEBUMPS: LATTERMAN
The last time Latterman played the Fest was in 2006, and the band broke up shortly thereafter. As someone who was in attendance that night, I can tell you they weren’t exactly well-received. But oh, what a difference six years (and a reunion) makes. As the New York punk quartet assembled onstage, the crowd at 8 Seconds swelled to unquestionably more than its legal capacity. When the band opened their set up with “Doom! Doom! Doom!” and its massive chorus of “Let’s set back our setbacks/For one more fucking day,” a thousand-plus fans sang along in unison, many of whom had likely never seen Latterman before. Seriously, it gave us goosebumps. [SH]

BEST SET FOR THE SMALLEST CROWD: THE ATOM AGE
Bay Area rock 'n' rollers the Atom Age kicked the most ass with the worst attendance. Here's a band that should have packed the largest venue with their rock and jive, but instead played to a nearly empty house on Sunday. Hopefully they'll be invited back next year, and hopefully more people will take notice. [JS]

LOUDEST BAND: SAINTHOOD REPS
No joke: We could literally hear “Monoculture,” the opening song of Sainthood Reps’ Sunday night set from a block away as we approached the club. Even more powerful was their epic closer, “Widow,” which was so immense it likely rattled the fillings of everyone in attendance. [SH]

BEST SET-ENDING QUOTE: THE FRONT BOTTOMS
After playing a solid 40-minute set and winning over a lot of attendees, the Front Bottoms closed their performance with this perfect bit of honesty: “I'm really, really sorry. I just want to go and drink 100 beers.” At presstime, we were unable to confirm if the band reached their goal. [JS]

BEST COVER SONG(S): BOMB THE MUSIC INDUSTRY!
In the wee hours of Sunday night, the official Fest after-party kicked off at the Holiday Inn with bands covering Green Day, Foo Fighters and more. Bomb The Music Industry! were billed as Fugazi, but after teasing the crowd with the intro to “Waiting Room,” they instead went into an all-Sugar Ray cover set, featuring “Fly,” “Every Morning” and “Mean Machine.” Here's the kicker: The band learned these covers literally an hour before showtime, and yet somehow they sounded spot-on, and everyone loved it. Or maybe it’s because everyone was drinking heavily when it happened. [SH]

BEST SET: BRAID
While Braid might be on the reunion-tour circuit along with many of their ’90s-emo peers, the difference is the band are still writing music. (Frontman Bob Nanna announced during their set they were hard at work on a new full-length.) Knowing the band are still forward-thinking really makes their back catalog come to life, and as their headlining set Saturday night proved, they’ve still got it. Plenty of cuts from Frame & Canvas were intermingled with tracks from old 7-inches as well as a new song, and it all flowed together seamlessly. They may not jump around onstage as much as they did 15 years ago (although to their credit, they are still pretty active while playing), but Braid are certainly no slouches, and their set delivered in spades. The amount of members of other bands who were in the crowd, slack-jawed, was legitimately too high to count. [SH]