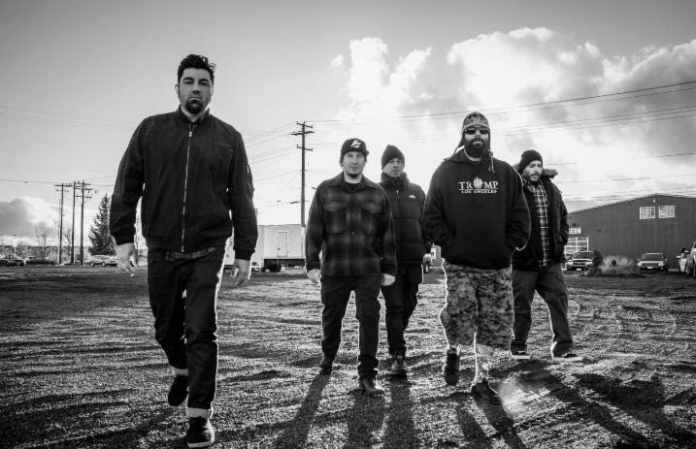 While many of their mid-’90s peers have struggled to remain visible or relevant in the contemporary rock scene, Deftones have remained close to the hearts of listeners over the course of 21 years and seven albums. Although their sonic signature runs the gamut from the impending doom (“My Own Summer”) to the ethereal (“Digital Bath”), each of Deftones’ records remain unified by their zero-compromise ethos. Lead singer Chino Moreno spoke to AP to talk about their eighth release, Gore, which arrives today.

Gore arrives this week. What are your thoughts now that it’s ready for listeners?

Well, it’s pretty much the same feeling we had from when we started making the record. It’s a challenging record. It’s not crazy, off-the-map of what Deftones do, but I do think it’s a growing experience. It might not be immediately gratifying, but it’s something that with each listen, you’ll get more out of it, and I see that as a good thing. Some of the best music should do that: It should leave you with questions and have you aching for more information. I think this record does that.

What goals did you and the band set when you began work on Gore?

Oh, not many. I think the biggest thing for us was to actually get together and make a record. The hard part is to actually be at the same place and at the same time. We’re spread out across the U.S. so we have to communicate and get things thought out, planned out. Once we’re in the same room with the door shut and locked, it’s time to work. For this record especially, we wanted to see what happens when we all walk into a room together and start reacting to each other. We’ve been successful with that (approach) for the last couple of albums, so we did that again except this was all in a short amount of time. We spaced things out for breaks, but I think we put in two to three months of work into the record altogether. It was done for a reason; so that we could capture the spirit and energy of all of us working in a room together but not burn ourselves out.

Were there any challenges or unexpected events?

There are always challenges. One goal is to not go in, follow form and do what comes easy. Questioning our ideas and questioning ourselves is not always the easiest thing. I think the only way we’d feel individually and collectively moving forward as opposed to being stagnant is to challenge ourselves and each other. But at the same time, we don’t want to alienate ourselves or our fans; our hopes are to make music that we individually and collectively enjoy. It takes a lot of trial and error but it’s worth it. It’s definitely work, I will say that. But it’s very rewarding work.

What do you think has changed the most within the band in the four years since Koi No Yokan?

Honestly, it didn’t seem like that long. From the time Koi No Yokan came out, a couple of years were spent on the road and playing. It felt very fluid. I don’t feel like we changed that dramatically as people or artists but just continued from where we left off. That being said, there’s still this need to want to expand and not remain complacent.

“Even as a creator of this music, I’m still finding things about it musically and lyrically that I didn’t think about. That excites me because that adds longevity to what we do and hopefully that transfers over to the listener.”

Your lyrics are always a high point of interest among listeners. There’s a lot of mystery to what you write and what you sing. In a good way, it leaves listeners puzzled. Are there particular ideas you try to convey via the lyrics you write?

That’s something that’s always intriguing. Some of my favorite records are the ones where even after multiple listens you still have questions. I guess I follow that pattern; I don’t have a book I use for songs of lyrics that I have in mind. My lyrics are all a reaction to the music that we create first. So, I hear the music, then I react and start putting words to it; it’s as simple as that. Although it may not be that simple because sometimes I don’t even understand what I’m writing about, so it is a mystery. It’s a mystery to me and I hope it’s a bigger mystery to other people. As great as I think this record is, I understand there will be people that are bothered by it, asking “what is this?” and saying “I don’t get it.” That doesn’t make me mad. I hope people will make multiple listens and have those questions. Even as a creator of this music, I’m still finding things about it musically and lyrically that I didn’t think about. That excites me because that adds longevity to what we do and hopefully that transfers over to the listener.

Fans consider every Deftones record to be a unique part of a larger whole. Where do you think Gore fits in the band’s body of work?

I might be too close to it; it might be too early for me to see how it fits in the bigger picture. There’s a certain spirit that happens when the five of us make sounds together, and it’s also kind of a sketch of where we are at a certain point in our lives. Any time I listen to Around The Fur, it takes me back to a point where it was the best times of our lives, and that’s why it is one of my favorite records. The self-titled record was one of the worst times of my life, but it may be someone’s favorite record because it was the soundtrack to the best time of their lives, and that’s great. The picture I have of us with this record? We’re all grown men in our 40s who started this band when we were kids. I think this record is a little bit more mature than the things we did before and a little more introspective. It’s a heavy record in an emotional way to me. But once I say the record’s “heavy,” some people will go, “what the fuck, it’s not heavy at all.” Every description of what that means is different, but I do think this record is more introspective than some of our past work. It’s just a part of us growing and maturing as musicians.

“I don’t think this will be a record that hardcore fans will get into right away. But I do hope people will be inspired to dig deeper with each listen.”

Finally, what do you hope listeners and fans will take with them after hearing the record?

Like I said before, I don’t think this will be a record that hardcore fans will get into right away. But I do hope people will be inspired to dig deeper with each listen. There’s a little bit more going on than what’s on the surface, and the more you listen to it, the more you will take out of it. If you walk away and that emotion changes your headspace after you hear it, then it’s done its job.