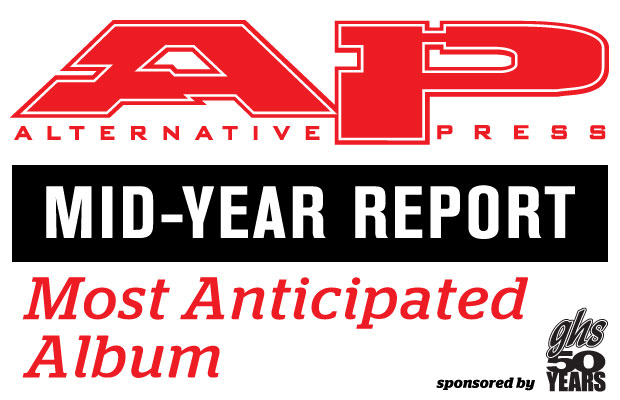 Another half-year has passed, so it’s time for AP’s annual mid-year report, where we break down the best of the best so far, with the cut-off date of June 30. Today, we conclude not with what we have already heard, but what we want to hear this year. Check it out below and tell us what you're looking forward to.

When the American Scene released their sophomore album, 2012's Safe For Now, they gained a loyal following by word of mouth while laying low on Pure Noise's roster compared to the loud pop-punks. It might not have happened overnight, but that speaks to how the band conducts themselves: music over marketing. Safe was the vehicle for bringing the band to their current level, touring with Balance And Composure this summer for example. Although we can't say much on the subject just yet, we have strong reason to believe their third album will ascend them further to the alt/indie stars. —Brian Kraus

Let’s not count Brand New out just yet. Something in the air just feels right this year. The band have been dropping hints—pictures in the studio, updates saying they’re “writing” and “recording”—but that’s all they ever do: drop hints. No official album announcement has been made. When Beyoncé dropped her surprise album late last year, Brand New fans immediately began tossing the idea around that Jesse Lacey & Co. could pull off a stunt like this—and they could. The music scene has changed so much since the band released Daisy in 2009; a whole new batch of younger fans have now grown up without a new BN release, elevating the band to an even more legendary status. As far as we know, they have no label, which further opens the door for them to do whatever the fuck they want with their next release, and if there’s one thing we know about Brand New: They do whatever the fuck they want. Above all else, the demand is there, especially after Daisy left so many fans feeling unsatisfied. We could very well see Brand New’s fifth full-length this year, and I’m not ruling it out until Dec. 31. —Matt Crane

Whenever I see Enter Shikari pop up in our news feed, I immediately perk up, only to be (slightly) let down when I realize it’s a story about a new tour or an in-the-studio update. Don’t get me wrong: I’m glad they’re posting studio updates; it means they’re working on a new album. And judging from the amount of updates they’ve posted, I’m apt to believe they must be working on something good. It’s been two years since the British band released their phenomenal, genre-destroying third album, A Flash Flood Of Colour. Since then they’ve tempted fans with a couple singles (“Paddington Frisk,” “Radiate”) which were later released on the Rat Race EP. Last Thursday the band released a live video of a new song called “Anaesthetist,” which will appear on their upcoming fourth album, slated to come out later this year. The audio quality isn’t great, but I already like what I’m hearing: frontman Rou Reynolds hip-hop cadence; the clean, sparse backing vocals on the chorus; a mix of electronic and hardcore influences. It sounds like the wait for album four will indeed be worth it. –Brittany Moseley

For their upcoming eighth album, due out this fall, the Foo Fighters are doing something different. The group have decided to pack up their gear and record each track in a different city. Not only that, but the whole ordeal is being documented for an upcoming HBO series called Sonic Highways, where frontman Dave Grohl will explore the musical heritage of each location, and interview other artists who have recorded there (a la his popular documentary, Sound City). That refreshing and unique premise, combined with the late-career strength of 2011's Wasting Light, has me hoping for a Foo Fighters renaissance, and I think they might just be in the right head space to deliver. —Philip Obenschain

There is a certain aura that surrounds every piece of music that Gideon releases; a quality that is consistently refreshing after each and every listen. The band’s relentless brand of faith-based metallic hardcore grabs your attention and revitalizes your mind. In 2011, they burst onto the scene with their admirable debut full-length Costs. The group quickly followed up with their sophomore album, Milestone, a year later. On Milestone the band take everything that made Costs stand out amongst the crowd, and place it into a honed onslaught of a new breed of hardcore. Gideon are currently in the studio with producer Will Putney (Stray From The Path, For Today) recording their yet-to-be titled, third full-length album. While there will be an indisputable sense of continued maturity throughout the record, it also has the potential to change the way people look at heavy music. —Tyler Sharp

In addition to looking rad together in photos, Ides Of Gemini have quietly unfurled a small catalog of brilliantly haunting work in the form of an EP, a split with Vermapyre, a 7-inch single and 2012's full-length sludge adventure, Constantinople. In late May, the California trio released a disturbing (in a good way) teaser video for their forthcoming second album, Old World New Wave, which will be issued in September on Neurot Recordings, the label ran and curated by similarly minded post-crustcore veteran metal shamans, Neurosis. The way the jagged, rudimentary lo-fi doom riffing of storied music journalist/guitar wielding troubadour J. Bennett butts up against the ethereal lead vocals of bassist Sera Timms and backing invocations of drummer Kelly Johnston-Gibson is near heavenly in its juxtaposition, making for a heady adventure for those brave enough to embark upon it. —Ryan J. Downey

We should first note that we’re not 100 percent sure No Devotion are releasing a full-length this year, so for now, I’m enjoying “Stay” and “Eyeshadow,” their first single and b-side, respectively, and hoping more is to come sooner rather than later. “Stay,” which sounds like a hybrid of Yeah Yeah Yeahs’ “Maps” and My Chemical Romance’s “The Only Hope For Me Is You,” swept me off my feet early this week, forcing me to replace my previously planned most anticipated choice immediately. This fresh start for the former members of Lostprophets with Geoff Rickly—one of the scene’s most respected songwriters and frontmen—on vocals, feels extremely promising, and not only that—it feels hopeful and cleansing for all parties involved. Good intentions spark powerful art which enriches the world. No Devotion seem like a force that has the power to do just that. —Cassie Whitt

Why is the thought of a Gerard Way solo album worthy of edge-of-your-seat anticipation? Consider that his previous band made four albums that didn't sound much alike. Note that the three recordings of songs that have leaked out (the bedroom-grunge demo “Zero Zero,” the Britpop-inspired “Millions” and the official album track rave-up “Action Cat”) are similarly multi-directional in scope. Revisit his ass-kicking collaboration with deadmau5 (“Professional Griefers”) for a moment. Way has built his creative life on what the next thing is going to be, which is both transcendent and troubling. The latter, because contriving something to fit a vision isn't honest, especially if it doesn't shine. The former, because from music to comics to visual art to stories to collaborations, he's pushed himself to achieve not necessarily greatness (that's for listeners to determine) but to maintain his personal standards—which have always beeen pretty nosebleed-inducing high in the first place. —Jason Pettigrew

WEEZER – Everything Will Be Alright In The End

I am a Weezer apologist. I celebrate the band's entire catalog—even the turd-shaped portions (sorry, Raditude)—and will vehemently defend my stance on Maladroit being their third-best record (behind Pinkerton and Blue, obviously). So take my excitement for Weezer's new album with a grain of quinoa, but it's worth noting this is the longest gap between albums since Pinkerton and the Green Album, and the band have spent more time in the studio, together (with producer Ric Ocasek) then they have since making the Red Album. The cover art rules, the mysterious song clips they've been posting on their YouTube channel are intriguing, and it's clear more actual work has gone into this record than anything Rivers Cuomo & Co. have released in quite some time. It might be a rock opera, it might be a concept album, it might sound totally awful—but at least it's shaping up to be interesting. —Scott Heisel