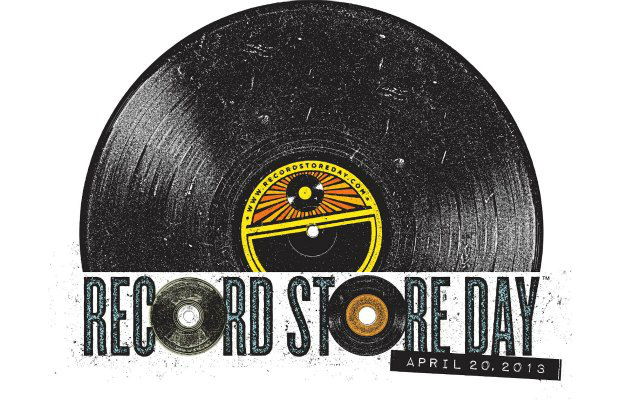 Okay, sure, we could write a scathing editorial on how Record Store Day has lost the plot. A day originally created to celebrate the wonder that is the independent record store has been mercilessly co-opted by labels both major and indie, looking to flood the marketplace with a substandard (and wildly overpriced) product, and many of the participating stores make it even worse, adding on insane markups to already insanely marked up items—or worse yet, they just throw everything on eBay and let the hyenas loose. That said, there is always something to be excited about on RSD, so this Saturday, April 20, we think you should consider waking up early and maxing out your credit card for the following:

At The Drive-In – Relationship Of Command 2xLP
While At The Drive-In's reunion may have petered out after only a dozen or so shows and no new music, at least we'll have this awesome repress of their groundbreaking 2000 album Relationship Of Command to enjoy. Limited to 4,000 copies (and rumored to have another, non-RSD-exclusive pressing immediately afterward), this one shouldn't be that hard to come across, and is essential for your collection no matter the price.

Cave In – Until Your Heart Stops LP
There's no way around it: Until Your Heart Stops is one of the greatest metalcore albums of all time. Of. All. Time. And finally, Hydra Head have gotten their shit together long enough to do a massively overdue repress of this genre classic. It's limited to 2,000 double LPs, and will likely run you a pretty penny since Hydra Head vinyl is never cheap, but trust us, it is worth it.

Jimmy Eat World – Damage 7-inch
This teaser 7-inch includes the title track from JEW's upcoming eighth full-length (out June 11 on RCA) as well as a cover of Radiohead's “Stop Whispering” (originally on 1993's Pablo Honey). Kind of a no-brainer purchase, don't you think?

New Found Glory – Mania 12-inch
Pop-punk princes New Found Glory are paying tribute to their roots with Mania, a six-song Ramones covers 12-inch (even the cover art is an homage to the original Mania by Ramones) limited to 1,000. The B-side of the 12-inch is a pretty neat etching that will impress fans of both NFG and Johnny, Joey, Dee Dee and Tommy.

Paramore – The Holiday Sessions 7-inch
Limited to 700 copies and available exclusively at Nashville record store Grimey's (and Paramore's official webstore), this 7-inch is die cut into the shape of a hibiscus flower and features all three of the interludes from Paramore's new, self-titled album.

Silverstein/August Burns Red – Four Minutes Being Cool split 7-inch
Silverstein have been huge supporters of Record Store Day in the past, so this year they got their friends and former tourmates August Burns Red to collaborate on a covers split 7-inch, limited to 500 copies. Silverstein take on “Coming Clean” by the Get Up Kids, while ABR tackles Saves The Day's “You Vandal.” This editor is stoked.

South Park – San Diego/Gay Fish 7-inch
Say what you will about the quality of South Park's humor in recent years, but it's hard to argue that their songs aren't still classic. And this 7-inch picture disc, limited to 2,000 copies, contains two of their best tracks in recent years: “San Diego,” which was, uh, inspired by the actions of Invisible Children co-founder Jason Russell, and “Gay Fish,” a clever bit of Auto-Tuned R&B poking fun at Kanye West.

Their/They're/There – Their/They're/There 12-inch
Limited to 800 copies, this six-song 12-inch is the debut release from Their/They're/There, featuring Evan Weiss of Into It. Over It. on guitar and vocals and Mike Kinsella (Owen/American Football) on drums. It's also being released by Polyvinyl Records. So basically, if you know those dudes and that label, you know exactly what this is going to sound like—and it's gonna be awesome.

Touché Amoré/Title Fight – split 7-inch
Two of hardcore's most innovative bands team up for a split 7-inch covering one another's songs. Touche Amore spazz up Title Fight's “Crescent-Shaped Depression” and TF do their best to deconstruct TA's “Face Ghost.” It's limited to 1,000 copies on red vinyl on RSD, but there will be another 3,500 copies or so made available after RSD ends, so there's no need to come to blows in your local record store if someone else grabs the last copy.