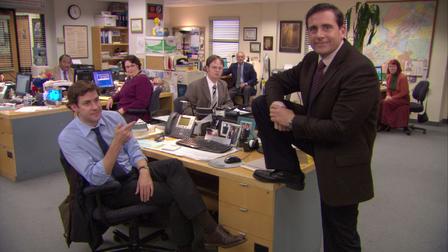 *This article contains spoilers for The Office.

Following the news that NBC appears to be preparing a revival of hit sitcom The Office for 2018, the internet has gone crazy, with fans of the show passionately stating cases both for and against the return of Scranton’s fictional paper supplier Dunder Mifflin to our screens. There are cons to a comeback of The Office, sure: Steve Carell has already stated he has no interest in reprising the role of the world’s best boss, Michael Scott; cast members such as Mindy Kaling and Ed Helms, whose careers have taken off post-The Office, could be hard to pin-down; and there was a slight drop-off in quality in the final two seasons of the series’ original run. But despite this, the world needs The Office back. No Michael Scott––so, what? It’ll be sad to see the Dunder Mifflin offices without Agent Michael Scarn, no doubt, but given his Season 7 exit, fans of The Office are plenty used to a Scottless show. Besides, Season 9’s final episode left us with beet-farming, indoor gun-shooting, accountability-loving Dwight Schrute in charge, and a run of episodes of The Office with Dwight at the helm could prove spectacularly hilarious. Don’t forget, last time the Schrute Farms owner was manager, he fired an antique Beaumont-Adams revolver in the office, installed a bunch of old punch clocks and was blackmailed into quoting lines from Austin Powers to the company’s CEO, all in the span of one 20-minute episode. Imagine the fun we could have with a whole series of that!

Moreover, the original series finale left us with a whole heap of unanswered questions. How did TV’s cutest couple, Jim and Pam Halpert, fare in their new life, and was Athlead a success? Maybe the show’s writers could use a revival to cover multiple offices featuring our favorite characters, as seen in Season 9? What happened when Ryan Howard and Kelly Kapoor ran off into the sunset to pursue their car-crash romance once more? And did crazy Creed Bratton make it out of jail? There are so many interesting tangents a revival of The Office could explore, and that’s without even mentioning the conspiracy theorists’ biggest question: Who is the Scranton Strangler? It’s also being reported that NBC’s new version of The Office will feature a mix of beloved old characters and some new faces, and the inclusion of the latter should help the show move beyond a mere reboot and explore truly original stories. The Office has a strong track record of introducing new faces, such as Idris Elba’s portrayal of arrogant executive Charles Miner and Ellie Kemper as charming secretary Erin Hannon. There have been missteps with new characters on The Office, too, such as the rather unlikeable Nellie Bertram, but what moves like that have shown is a willingness by the franchise to refuse to stagnate, and the inclusion of new characters in a reboot of The Office should further help that cause.

The world isn’t the happiest of places right now, and a return of The Office could be the weekly dose of goofy fun we all need to drag us through the mire. The story of Dunder Mifflin is utterly lovable, totally stupid and not to be taken very seriously, and it’s the kind of show 2018 needs. “An office is a place where dreams come true.” Michael Scott, 2/1/2009 (said shortly after he nearly killed Stanley Hudson).